Difference between revisions of "Chloroflexus aurantiacus" 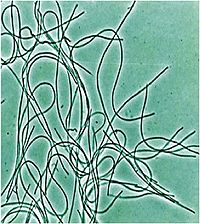 The genome for C. aurantiacus has been completely sequenced by the U.S. Department of Energy's Joint Genome Institute. Its genetic code consists of 5,258,241 base pairs of DNA concentrated within a single circular chromosome. 3,990 genes have been sequenced within this organism's genome, but of these, 219 possess a function unknown to scientists at this time. 80% of the genome of C. aurantiacus is known to code for functional proteins relevant to the sustainability of the cell. No portion of the genome is utilized for RNA modification. 61 structural RNAs are also encoded within the genome of C. aurantiacus. [6]

The cytoplasmic membrane is a crucial aspect of the overall cellular structure of C. aurantiacus. Several chlorosomes are attached to the inner wall of the cytoplasmic membrane. These serve to aid C. aurantiacus with its' photosynthetic processes, acting as light-harvesting units. These chlorosomes are also noted for containing bacteriochlorophyll c; a photosynthetic pigment that is only known to occur within Chloroflexi.[7]

C. aurantiacus is often classified with green non-sulfur bacteria, but this is a slightly deceptive description because it implies that all organisms in this lineage are green and do not utilize sulfur. This organism, on the other hand, utilizes sulfur. As described above, this organism is an anoxygenic phototroph, which utilizes bacteriochlorophylls a & c. Furthermore, C. aurantiacus utilizes these bacteriochlorophylls as the primary directors of their light-harvesting processes. This organism primarily utilizes organic material as a possible energy source, consuming the organic byproducts of cyanobacteria that it commonly associates with. However, it may also utilize hydrogen or sulfide as an electron donor when found on its own. This implies that C. aurantiacus can be a photolithotroph and a photoheterotroph.[8]

The reductive pentose phosphate pathway (Calvin cycle) and 3-hydroxy-propionate pathway are both used to fix carbon within this organism. Oddly, C. aurantiacus lacks the ribulose bisphosphate carboxylase protein. This enzyme is normally involved in glyceraldehyde-3-phosphate production in the Calvin cycle. So far, C. aurantiacus is the only anoxygenic phototrophic bacteria to demonstrate the 3-hydroxy-propionate pathway. This pathway ultimately produces pyruvate from the glyoxylate cycle to produce carbon skeletons for further metabolism. Variants of this pathway are relatively uncommon, however it is speculated that a similar pathway is carried out within Crenarchaeota.[9] 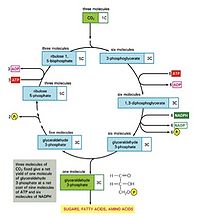 As described above, C. aurantiacus is a photosynthetic, anoxygenic bacteria that primarily lives within hot springs. It forms a symbiotic relationship with various strains of cyanobacteria, often acting as an anchor within the microbial mats in which it is found. In exchange, the cyanobacteria provide C. aurantiacus with various organic byproducts to compensate for its positioning on the lowest ends of the microbial mat.[10] 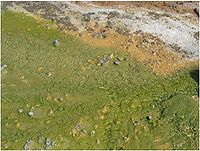 C. aurantiacus is known for its close relation to several other types of green non-sulfur bacteria through its 16S rRNA phylogeny. Therefore, it is regarded as a model organism that is critical to the understanding of the evolution of photosynthesis. It is the earliest known organism within the eubacteria branch to possess the photosynthetic phenotype. Even so, there is much speculation as to whether or not photosynthetic properties were donated to C. aurantiacus from an unknown source or if this organism donated the characteristics away via lateral gene transfer.[2]

This organism utilizes the 3-hydroxy-proprionate pathway. Recently, the missing steps of this rare metabolism were uncovered yielding the involvement of 19 steps that utilize 13 different enzymes. The most important of these was the previously unidentified enzyme related to the assimilation of glyoxylate, which is a two cycle process. In the second cycle, glyoxylate is reacted with proprionyl-CoA to produce B-methylmalyl-CoA. Afterwards, the process continues onward as normal. Furthermore, this pathway requires 3 molecules of bicarbonate to construct one molecule of pyruvate. The production of pyruvate for this microorganism is more favorable by this pathway rather than the Calvin cycle because less ATP is required for synthesis. However, when necessary, C. aurantiacus can use the Calvin cycle for sugar metabolism, especially under certain conditions such as low levels of bicarbonate. In its default habitat (alkaline hot springs), bicarbonate levels are much higher than that of dissolved carbon dioxide. Therefore, C. aurantiacus generally favors the 3-hydroxy-proprionate pathway for the synthesis of pyruvate and fixation of carbon.[6]