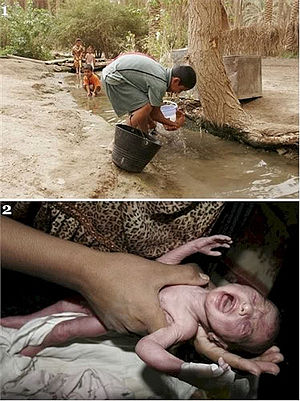 Although Cholera no longer threatens developed countries that meet the minimum hygiene standards, it is still a big factor of those countries with large numbers of people living in unsanitary conditions. Cholera thrives in such places where there is no guaranteed access to clean water or sanitation, places such as Zimbabwe. (4)

Cholera is caused by the microbe V. cholerae and is characterized by it's sudden onset of acute watery diarrhea. The disease itself can be traced back at least 2000 years in literature, on the Indian subcontinent long before the arrival of the Europeans. There are currently many different views on the origin of it's name. Some claim that cholera stems from the two Greek words "chole" meaning bile, and "rein" meaning flow. Put together, one would get "the flow of bile". Other people suggest that it comes from the Greek word "cholera" which means "gutter", suggesting that the symptoms of cholera resemble the heavy flow of rain on rooftop gutters. (2)

Symptoms of Cholera include an onset of acute watery diarrhea which can lead to death by dehydration within hours if left untreated. This disease is transmitted easily through ingestion of food or water contaminated with the microbe, V. cholerae. (1) V. cholerae's short incubation time and ability to survive long periods of time in aquatic environments makes for easy break outs in unsanitary areas, including but not limited to, third world countries. (2) This makes the disease even more deadly, if cholera has the ability to kill a healthy adult within hours then people with lower immunity; for instance malnourished children or people living with AIDs are at an even higher risk of death. In addition to poor sanitation, some suggest that the spread of cholera is intensified by the passage of the bacteria through the human gut. It is thought that there is something about the environment of the intestinal environment that will change gene expression, preparing them for further collonization of new hosts, fueling epidemics. (3) Data for individuals who develop the symptoms show that 80% will show mild to moderate acute watery diarrhea while about 20% will experience severe and rapid dehydration due to water loss through severe diarrhea. (1)

Vibrio cholera is a curved rod-shaped (5) gram-negative bacterium (6) that resides naturally in aquatic ecosystems. The disease causing strains were evolved from non-pathogenic progenitor bacteria that were acquiesced from virulence genes. (5) V. Cholera is a facultative anaerobe (9) and is oxidative-positive, capable of both respiratory and fermentative metabolism. It has a single polar flagellum for motility (6) with an incubation period of 1-5 days. (9) V. cholera bacteria have been found in alkaline media but survive poorly in acid. (8)

According to update on current cholera outbreaks 2004 (25), the V. cholerae in Zimbabwe is confirmed as V. cholerae, serogroup 01, serotype Inaba. The pathogenicity of the V. cholerae O1 is due to the production of virulence factors such as cholara toxin (CT), and the toxin-coregulated pilus (TCP), which is crucial for the bacteria to adhere to the intestinal epithelium. The mobility of the vibrios also may affect virulence by enabling them to penetrate the mucus layer in human small bowel.(23) Serotype Inaba has a common antigen A and also the type-specific antigen C. (23) In addition, hemolysin, which, triggers an outward transcelluar flux of chloride, Na+ and water, might be responsible for the diarrhea. (23)

Humans are the only natural hosts for the V. cholera, and cholera can be transmitted via ingestion of water or food contaminated with the feces of an infected individual (23) but not likely to be transferred through human-to-human contact. Fruits and vegetables infected with V. Cholera are advised to be avoided unless consumed cooked or the coverings peeled from fruits. (31) There have been reported links between cholera found in sliced fruits by probable secondary transmission. (30) Long-term carriers have been reported but extremely rare. Recent studies have suggested that V. cholera can persist for some time in seafood such as shellfish, algae or plankton in coastal regions of infected area as a viable but non-culturable state. (23) 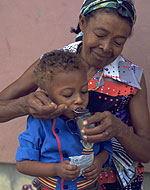 Oral rehydration salts is being fed to the sick child. (27)

The first and foremost treatment that one should get is timely rehydration. 80% of the patients can be treated with the sole use of oral rehydration salts while the remaining 20% will require rehydration by intravenous fluids. Note that antibiotics are not as useful as rehydration but they are still used to shorten the time the microbe is in the gut. (1)

The oral cholera vaccine showed ~90% protection against cholera of life-threatening severity, and the cholera vaccine has been shown to confer herd protection against cholera among un-vaccinated neighbors of vaccinees. However, the WHO has been reluctant to consider vaccination as a strategy to contain cholera in Zimbabwe due to its two-dose regimen, short shelf life, and need for cold chain distribution. (22) In order to control Zimbabwe's cholera epidemic, increased awareness about how to treat cholera, more medical staffs & supplies such as oral rehydration salts (ORS) and chlorine tablets, and access to health services and safe water supply in remote areas are needed. (24)

Why cholera is a problem in Zimbabwe 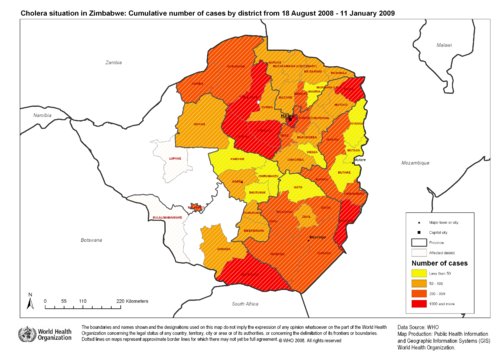 Cholera is endemic in Zimbabwe, with outbreaks increasing in frequency since the early 1900s, with two large outbreaks in 1999 and 2002 (10). The most recent major outbreak occurred in Chitungwiza, outside of the Zimbabwean capital, on August 2008 (11). The epidemic, identified to be caused by V. cholera strain O1 (21), follows the path of most cholera outbreaks: contamination of drinking water due to overflow from sewers. As Chitungwiza holds a booming population and suffers from perennial water shortages, the sewer system was overburdened, leading to the outbreak. Water shortages in the poorer regions of the capital resulted in the lack of hygiene worsened the situation. Compounding the situation is the unstable political climate of the region due to post-election violence and sanctions that have banned travel to the country and froze foreign assets (12), leading to the collapse of the health system. The severity of the outbreak is such that it became sub-regional, with cases being reported in Zimbabwe's borders with South Africa, Botswana, and Mozambique. By the time the outbreak died down in June 2009, more than 10,000 cases have been reported, with more than 4,200 deaths, yet fears of a future outbreak continue to persist as poor drainage systems lead to dirty pools following the rainy season (11).

What is being done in Zimbabwe to address cholera

The cholera crisis hit the hardest in mid-August 2008 with 87,998 cases along with 3,975 deaths recorded in March 2009. (15) Robert Mugabe, president of Zimbabwe, believed to have worsen the cholera situation when he sarcastically said there is "no cholera" and that the disease was brought by Britain as a "biological warfare".(32) Mugabe's state of denial has led many to believe Zimbabwe to becoming a failed state. Unable to control the outbreak of cholera due to factors such as economic instability, Zimbabwe’s health department, the Ministry of Health & Child Welfare (MoHCW), called for national emergency and international aid on December 3, 2008. (13) The table below lists some of the major global organizations and their area of focus in the humanitarian project (14):

The United Nations Children's Fund (UNICEF) responded with the 180-day emergency response plan that went on from December 2008 to May 2009. The operation have placed much emphasis in providing clean water: about 700,000L of clean water (13) is shipped daily along with materials such as purification tablets and Aluminum Sulphate. UNICEF also worked to educate the nation about preventative measures against cholera through handing out 220,000 brochures and directing campaigns in school. (13) Together with MoHCW, UNICEF utilized the media to convey their message across television and other communication broadcasts.

The support team at the World Health Organization (WHO) monitors the cholera crisis carefully, sending updates and alerts regularly to inform the nation of any immediate action. WHO recommends not using mass chemoprophylaxis together with antibiotics as it does not get rid of cholera but instead may increase one’s resistance against antibiotics. (16) As people with cholera can be severely dehydrated, WHO advise people to take oral rehydration salts as soon as possible. (16)

Nongovernmental organizations (NGOs) such as the Red Cross and Médecins Sans Frontières also made contributions to the Zimbabwe cholera outbreak. In addition to providing food and equipment, the Red Cross also installed an emergency response unit (ERU) that is responsible for delivering clean water and promoting sanitation practices. People are advised to wash their hands and keep food free from bacterial contamination by cooking them well-done and boil water. (17) Médecins Sans Frontières have established numerous cholera treatment centers in rural cities where major governmental assistance may not be available.(18) Increase cholera treatment centers across the country allows for people to be treated immediately so that mortality can be avoided.

What else could be done to address this problem

The WHO maintains that providing prompt rehydration and oral rehyradtion salts (ORS; a sodium and glucose solution in safe water) is sufficient to successfully treat most patients (1) which could improve the current situation in the short run and drastically reduce the mortality rate of the disease in Zimbabwe. However, ultimately the restoration of Zimbabwe’s health and sanitation systems, which collapsed under the weight of the growing economic and political pressures hitting the country (10) is the only viable long term solution to ending the Cholera epidemic rampant in many parts of the country. Future Cholera outbreaks will continue and prevention efforts, which include continued clean water and proper sanitation access (7), will be stifled unless the government, and the public utilities it controls, can stabilized and the turmoil and unrest, found in many parts of the country, subsides.

The identification that Cholera “has a historical context linking it to specific seasons and biogeographical zones” (20) has lead to the establishment of Cholera as a paradigm (2) on how the understanding of a disease, which usually consisted of its known virulence, can be further supplemented with information concerning the environmental factors, such as transmission and epidemiology, in order to formulate models to understand the dynamics of the disease (19). The discovery that the infectivity of V. cholerae can be enhanced through the passage of a host (3) has come to elucidate the explosive number of outbreaks which was mostly though to be the result of an extremely short incubation period (7). Furthermore, the established association between V. cholerae with copepods, whereby the bacteria becomes concentrated in zooplankters, and the subsequent ingestion of the copepods in communities consuming untreated water(2), has lead to the proposal of by Colwell et al. that “a simple and effective measure to filter plankton from water using sari material has been developed, and preliminary evidence shows a significant reduction in cholera cases in those households using this filtration procedure.” (20)

Finally, the future of Cholerae prevention, as well as and any other infectious disease, lies in the ability to develop effective and accurate climate models which could serve as early-warning systems for infectious disease outbreaks, such as the mathematical model developed for V. cholerae in Bangladesh (20). This shift in focus from containment to prevention in public health measures represents a positive step in the direction toward minimizing the death rate during outbreaks such as the ones in Zimbabwe.

(1) WHO, "WHO position paper on Oral Rehydration Salts to reduce mortality from cholera"

(14) "The Cluster Approach in Zimbabwe."