A Microbial Biorealm page on the genus Chrysophyceae 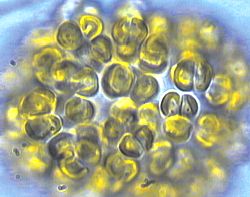 Chrysophyceae are small flagellates that are a yellowish brown color. They have two flagella that are a different size and shape that originate in the anterior side. The larger one has two rows of stiff mastigonemes and the shorter only has a few hairy extensions. Chrysophyceae is found as a unicellular organism and as a multicellular organism thought the unicellular is more common. It can also be found singly or in a colony. Like diatoms it can form silica, but it is stored in a cyst within the cell instead of the cell wall. 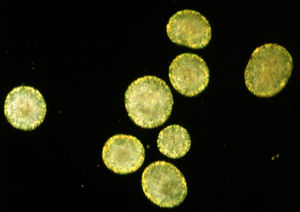 There are several different kinds of cells walls within Chrysophyceae. They vary from the Ochromonas that is capable of amoeboid movement, the cells may be naked and imbeded in mucilage, such as Chrysosaccus, or coccoid and surrounded by a cell wall, as in Chrysosphaera. They can even filamentous like Phaeoplaca.

Chrysophyceae are somewhat photosythetic, but it can also digest it's own food. The pigmentation is cause by fucoxanthin and the chlorophylls. This is in the certain kinds that are amoeboid in nature. There is a certain species of Chrysophyceae in the polar water that is one of the most photosynthetic eukaryotes in the cold ocean regions.

Chyrsophyceae is both sexual and asexual. Sexually it reproduces through zygotic meiosis, which may be isogamous, oogametic or anisogmaous. The zygote produces forms a silica cyst before it develops. When it reproduces asexually, which is the most common form of reproduction, it goes through binary fission and creates a cyst or statospore.

Chryosphyceae are generally a freshwater protists, but can also be found in moist soil and mosses. They are generally found in colder waters, but will grow well at higher temperatures. They also prefer the water to have a slightly acidic pH. Some are found in the ocean and are significant members of the nanoplankton. They can survive inactive periods by creating a endocysts that has a single cell. They can also switch to heterotrophic mode from autotrophic mode if there is a food scarcity. To do this they will develope pseudopods to catch small protists.

Lubosza Wesołowska. Interesting and rare yellow algae(Chrysophyceae) of selected humotrofic lakes and the peatbog in the Rosochaty Rog village on the area of Wigry National Park.