Difference between revisions of "Chrysophyta"

A Microbial Biorealm page on the Chrysophyta

Chrysophyta is a phylum of unicellular marine or freshwater protists. Members of this phylum include the diatoms (class Bacillariophyta), golden/golden-brown algae (class Chrysophyceae), and yellow-green algae (class Xanthophyceae). Species' characteristics are varied: some are free-swimming unicells, while others are filamentous or colonial.

Many chysophtyes are photosynthetic, which led to their initial categorization as plants. Actually, however, they are protist "secondary endosymbionts." That is, their evolutionary history included ingestion of an algae that already possessed a chloroplast descendent of a photosynthetic bacterium. The ingested algae (with its chloroplast) ultimately degenerated as an obligate organelle of the protist cell.

Two Chrysophyta mitochondrial genomes have been sequenced (see them here).

Because Chrysophyta encompasses so many species, there is no common cell structure. Some cell walls are comprised mainly of cellulose, with large amounts of silica, while some are amoeboid with no cell walls. If flagella are present, there may be one or two; if there are two they may or may not be similar. Diatoms are capable of reproducing sexually, but the chrysophytes commonly reproduce through cell division. Members of Chrysophyta tend to be photosynthetic, but some, especially the golden algae, become heterotrophic when there is inadequate light or if dissolved food is plentiful. 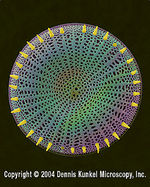 Members of Chrysophyta are found in marine and freshwater environments. The diatoms and the golden-brown algae are the most ecologically significant; they make up part of the plankton and nanoplankton that are the foundation of the aquatic food chain. Distribution of these organisms depend on the class to which they belong.