There are roughly 8,000 species of Ciliophora. Ji et. al. (2005) recently discovered two new speices of Ciliophora: Pseudovorticella clampi and Zoothamnium pararbuscula. There are numerous types of Ciliophora. Some of the major ones include Didinium, Paramecium, Stentor,Suctoria, and Vorticella

Some Ciliophora have unique genetic codes. In certain species, the UGA, UAG, and UAA codons, which are typically stop codons, have different functions. UAA and UAG instead code for glutamine, while UGA (the universal stop codon) translates to cysteine or tryptophan. The research of Kim et. al. (2005) suggests that this codon reassignment is mainly influenced by Eukaryotic release factor 1 (eRF1), which is an important protien for stop codon recognition. Their work also shows that the ciliate genetic code has deviated from the universal genetic code.

Ciliophora get their name based on their method of locomotion: they swim with cilia. Cilia are short, hairlike projections of cytoplasm composed of pairs of microtubules surrounded by cell membrane. They line the cell membrane. Cilia can also be used for obtaining food. In some species, they are fused into sheets, making them efficient at sweeping up food.

Ciliophora are heterotrophic organisms. Some species prey on bacteria, while others eat algae, other Ciliophora, or detritus.

Sexual reproduction of Paramecia. The World of Biology by Jerry G. Johnson. 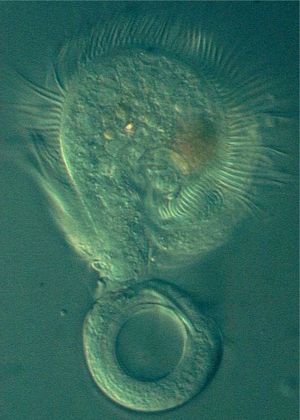 Some species of Ciliophora are pathogenic. Anophryoides haemophila, for example, causes Bumber Car Disease, a serious affliction of captive lobsters. It is a major cause of death among lobsters being held for commerical purposes. Bumper Car Disease results in the depletion of blood cells. There is currently no treatment for this disease.