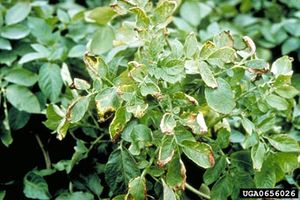 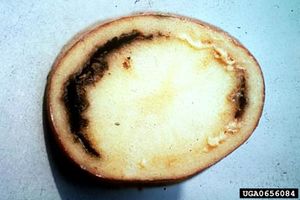 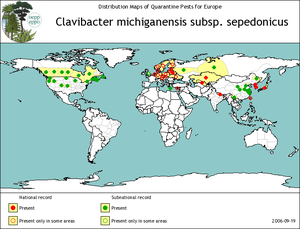 C. michiganensis subsp. sepedonicus is an aerobic Gram-positive rod-shaped plant-pathogenic bacterium that causes bacterial ring rot disease in potatoes (Solanum tuberosum). It is found in parts of North America and is spread through most of northern and eastern Europe (FERA 2008). Bacterial ring rot results in large economic losses worldwide- yield losses are caused by tuber rotting and in individual crops in the US, losses have been as high as 50%. (FERA 2008) The bacterium is subject to quarantine and zero-tolerance importation policies in many nations (Lee, I-M, 1997). Other subspecies of C. michiganensis affect other crops, including corn, tomatoes, and alfalfa.

C. michiganensis subsp. sepedonicus infects the vascular system of potatoes. Optimal temperature for growth is 25-29 degrees C (Davis et al 1984, Joint Genome Institute 2009); C. michiganensis subsp sepedonicus will not survive in soil if temperatures are below freezing. (EPPO 1997). It survives poorly outside the host plant, but can persist better under dry and cold conditions, if metabolic activity is low and microbial competition is weak (Nelson, 1978). It can also survive in water for up to 30 days. In addition, C. michiganensis subsp. sepedonicus can survive and remain infectious for several years on machinery, burlap potato sacks, boxes, walls, and other surfaces that have been in contact with an infected potato. (FERA 2008).

The genus is characterized by non-motility, the presence of D- and L-diaminobutyrate in the cell wall, the major menaquinone MK-9, and the polyamines spermine and spermidine. (Eichenlaub 2007) 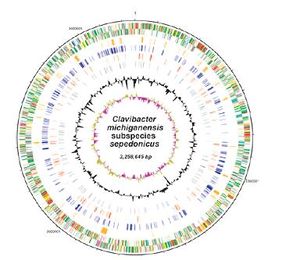 The complete genome of Clavibacter michiganensis subsp. sepedonicus has been sequenced. It is reported that the genome consists of a singular circular chromosome (3,258,645 bp, 72.56 % G+C, 3016 genes), a linear plasmid (pSCL1) (94,603 bp, 68.83 % G+C) and a circular plasmid (pSCL1)(50,350 bp, 67.46 % G+C). (National Center for Biotechnology Information Center (NCBI)) Pathogenicity is believed to be associated with the two plasmids, pSC1 and pSCL1 (NCBI). The chromosome codes for numerous antibiotic resistance-related genes, as well as many genes relevant to microbial ecology. Some of these genes are used to withstand low iron and oxidative stresses, including: siderophore binding and biosynthesis proteins, iron uptake permease, heavy metal detoxification proteins, catalase, numerous peroxidases and superoxidase dismutases, hydroperoxide resistance proteins, heme-binding proteins, iron-chelating proteins, copper resistance surface proteins, an iron-siderophore uptake system and pectate lyase proteins (Bentley 2008). Because of their significant role in tolerance to UV radiation stresses, the superoxidase disumutases and catalase genes are potentially remnant of other epiphytic Clavibacter species (Jacobs 2003).

Clavibacter michiganensis subsp. sepedonicus is a gram positive bacteria (Li and Deboer, 1995). It is pleomorphic, slightly club-shaped short rod and this rod size is about 0.5 - 1.0 µm. C.m. sepedonicus is aerobic pathogen but it also can grow slowly in anaerobic condition. The isolated colonies are often yellow, creamy and smooth (Van der Wolf J.M et al, 2005). C.m. sepedonicus infects the healthy plant through wounds. It moves from plant to plant in irrigation water or insect vectors such as Colorado potato beetles and flea beetles. C.m. sepedonicus is soil invader pathogen. The pathogens overwinter in tuber seeds and favor in high temperature at the end of growing season. It can survive in tuber seeds, plant debris and on agricultural equipments. It can survive up to 10 days in surface water and up to 5 years in dried and cold climate (Sparks A. and Megan K., 2008) and. However, if the temperature increases up to 15oC, the pathogen can survive only for few weeks (Van der Wolf J.M. et al, 2005). The C.m. sepedonicus gene was found 90% identity of Clavibacter michiganensis subsp. michiganensis. This species has gene which code for a protein of more than 700 amino acids (Van der Wolf J.M et al, 2005).

Once in the host, Cms colonizes the plant's vascular system, most notably the vascular ring of potato tubers. In potatoes, early stages of infection are relatively difficult to distinguish from healthy specimens. First, the tuber tissue will appear glassy and water soaked. Later, the tissue will turn black or brown around the vascular ring, often disintegrating. Typically, later stages of Cms colonization can be identified by a creamy or cheesy bacterial ooze from the vascular ring. Wilting of the leaf edges and discoloration of plant stem vascular tissue occurs in the latest stages of infection, but is typically difficult to distinguish (EPPO 2006).

The cell wall of C. michiganensis subsp. sepedonicus contains sugars rhamnose, mannose, galactose, and low levels of glucose, and the amino acids glycine, alanine, and glutamic acid. Its peptidoglycan is composed of Diaminobutyric acid. Cms produces acid from mannitol and sorbitol, utilizes acetate, citrate, and fumarate, and hydrolyzes esculin. In addition, it is tolerant of potassium cyanide (Davis et al 1984). A complete list of metabolic pathways and enzymes encoded by the genome of Cms can be found in the JGI database. 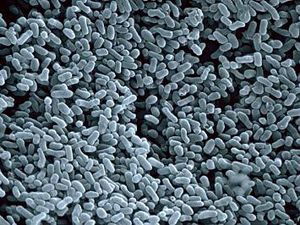 C.m. sepedonicus's infection is mainly on potato, less in tomato and eggplant, sometime in root of sugar beet. In potato, it causes ring rot in tuber seeds. This disease was first found in Germany in the late 1800's. Then the pathogen was presented into United States in the early 1930's and spread out whole the country by 1940's (Randall C. Rowe et al, 1995). The disease severity can cause wilting of leaf and stem, chlorosis and necrosis from leaf margins. C.m. sepedonicus produces amylase and cellulase enzymes. Amylase enzyme is used to break drown starch into sugar and cellulase is responsible for the hydrolysis of the cellulose polymer into dimeric subunits. Cellulase was also proven as an important virulence factor for C.m. sepedonicus (Van der Wolf J.M et al, 2005).