A Microbial Biorealm page on the Clostridium 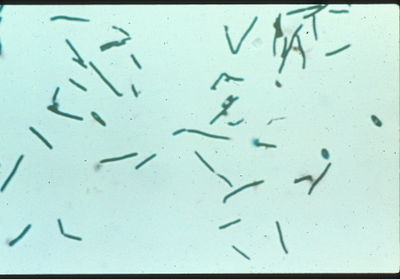 Clostridia are, spore-forming, Gram-positive, anaerobes (although some species are microaerophilic). They are known to produce a variety of toxins, some of which are fatal.

Currently there are 3 complete genomes and 7 more that are in progress (click on "Genomes" under NCBI for complete list).

The genomes of both Clostridium tetani, the etiological agent of tetanus, and Clostridium perfringens, the etiological agent of gas gangrene have been sequenced. The genome of C. tetani is 2,799,250 bp long with 2,372 open reading frames. C. tetani also contains a plasmid that measures 74,082 bp long with 61 open reading frames and encodes the tetanus toxin.

The genome of Clostridium perfringens is 3,031,430 bp long with 2,660 open reading frames and a low G+C content of 28.6%. C. perfringens is an excellent model for genetic studies of the clostridium genus due to its oxygen tolerance and fast growth rate. The genome contains, as would be expected, the typical anaerobic fermentation enzymes leading to gas production (one of the characteristics of gas gangrene, the disease it causes), but no enzymes for the tricarboxylic acid cycle of respiratory chain.

The genome of Clostridium acetobutylicum is 3.94088 Mega-base pairs long with a 192-kb megaplasmid. Its G+C content is 30%. This species is capable of producing organic solvents through fermentation. These solvents were used in WWI for industrial starched-based acetone, butanol and ethanol. 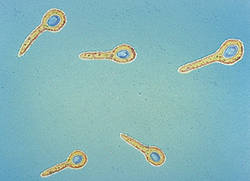 Clostridia during the spore formation stage. The vegetative cells are the yellow drumsticks, and the spores are the light-blue ovals within the yellow cells. From Fit for Travel.

Clostridia are rod-shaped, but when producing spores they appear more like drumsticks with a bulge at one end. Most clostridia are obligate fermenters. They ferment by pathways that generate organic solvents such as butanol.

Clostridia are commonly found in the environment. They inhabit soil, sewage, and marine sediments, as well as the intestines of both animals and humans. Several species of clostridia are used industrially for the production of alcohols and commercial solvents. A few species, such as C. butyricum and C. pasteurianum fix nitrogen. The spores of clostridia are produced during times of stress, and can persist in toxic environments where the anaerobic bacteria cannot.

There are three species of clostridia that cause widely recognized and often-deadly diseases. Clostridium tetani is the etiological agent of tetanus, Clostridium botulinum is the etiological agent of botulism, and Clostridium perfringens is one of the etiological agent of gas gangrene. Tetanus is contracted through contact between spores of C. tetani and an open wound, such as stepping on a rusty nail. If an anaerobic environment is present the spores will germinate. Tetanus is a neurological disease. C. tetani releases an exotoxin called tetanus toxin, which blocks the release of neurotransmitters from the presynaptic membrane of inhibitory interneurons of spinal cord and brainstem of mammals that regulate muscle contraction. This leads to continuous muscle contraction primarily in the neck and jaw muscles (lockjaw). If the infection is left untreated, it will eventually lead to respiratory failure and death. If not treated early, mortality rates for tetanus are relatively high. After World War II with the introduction of the tetanus vaccine, C. tetani infection has become relatively rare in industrialized countries, and almost all cases are due to insufficient immunization. Clostridium botulinum causes botulism, which is contracted through contact (usually ingestion) of botulinum toxin (wound botulism is rare, but can occur). There are about 10-30 outbreaks of botulism reported annually in the United States, almost all of which are associated with improperly canned or processed food (usually home-canned). Sausages, meat products, canned vegetables, and seafood are the most frequent vehicles of C. botulinum. Because clostridium spores can be airborne, they often find their way onto food that is going to be canned, which provides a pleasant anaerobic environment for the spores to germinate and release their toxin. Botulinum toxin is a protein that C. botulinum secretes, which causes muscle paralysis by blocking the presynaptic release of the neurotransmitter acetylcholine. The onset of symptoms for foodborne botulism is usually 18-36 hours after the ingestion of infected food. The toxin causes paralysis that progresses symmetrically downward, usually starting with the eyes and face, then down to the throat, chest, and extremities. Once the chest muscles and diaphragm become involved, respiration becomes difficult and death by asphyxia often results. 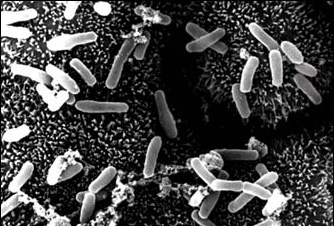 Clostridium difficile adhering to the microvilli of the gut. From J. Hobot.

Clostridium perfringens is one of several species of clostridia known to cause gas gangrene and is the causative agent in 95% of gas gangrene cases. The site of infection is usually a wound that comes into contact with C. perfringens spores that germinate in an anaerobic environment. People with poor circulation are more likely to get this disease, due to their inability to keep all of their tissues adequately oxidized. The C. perfringens toxin, which is a phospholipase, attacks cell membranes, causing extensive tissue damage and necrosis, which further reduces the blood supply to the affected area, promoting the spread of the disease. Gas gangrene gets its name from the frequent formation of gas bubbles in the tissue. These gas bubbles are caused by rapid metabolism by C. perfringens, using the muscle tissue as substrate. If untreated gas gangrene will eventually result in a very painful death, as the bacteria slowly eats away at your flesh. Usual treatment is amputation of the infected areas.

Clostridium sordelli has also been found to be involved in two deaths that were associated with the birth control pill Mifeprex. Mifeprex has been on the market since 2000, and there have been 4 deaths that have been cause by not following the FDA's instruction on the proper use of the drug. Instead of taking the pill orally these women chose to insert the pill into the vagina. This caused infections, and in two of the four Clostridium sordelli was the main infectious agent.

After reading the above account of the deadly properties of botulinum toxin (or botox as it is commonly called in the medical profession), it must seem hard to believe that it also had beneficial uses in the medical field. Physicians use small doses in a purified form of the toxin to control certain conditions marked by uncontrollable muscle contraction. As mentioned above in pathology, botox inhibits the presynaptic secretion of the neurotransmitter acetylcholine, which would normally signal the muscle to contract. Botox can be injected into specific, problematic muscles while leaving neighboring muscles unaffected. The effects of one injection usually last about three or four months, so repeated injections are necessary. Although botox is an approved therapy, it is also one of the most deadly toxins in existence and may have long-term side effects that are not yet known. More recently botox has seen increased use in plastic surgery to combat the evidence of age. When injected into specific facial muscles, botox paralyzes them, and largely eliminates the appearance of wrinkles.

This woman is suffering from a condition called blepharospasm. In the first picture she is unable to open her eyes due to abnormal muscle contraction. In the center she can open her eyes with her, hands, but still cannot keep them open on her own. The third picture is after injection with botulinum toxin. She can now keep her eyes completely open without touching them . From U.S. Food and Drug Administration.

In the fight against cancer, researchers are constantly trying to come up with new, more effective ways to completely remove tumors. A recent study has shown Clostridium novyi to be a likely candidate for new bacteria therapy to eliminate tumors. A problem that is frequently encountered in oncology is the inability of certain treatments to reach all the areas of the tumor. Although tumors form new blood vessels to provide the mutant cells with nutrients, the tumor often grows so fast that angiogenesis cannot keep up, and many areas of the tumor become malnutritioned an hypoxic. Therefore chemotherapeutic drugs have difficulty reaching these regions, and ionizing radiation, which depends on oxygen, cannot kill cancer cells in these areas. Since these necrotic tissues exist only in tumors, anaerobic bacteria can be used to treat these areas. Clostridium novyi, like many other clostridia, produces a toxin that is fatal for humans, but fortunately carries the gene for this toxin on a phage episome, which researchers removed. When testing this altered form of C. novyi on mice, the treatment was found to completely eliminate 75% of the tumors in the mice it was tested on within 24 hours (when used in conjunction with chemotherapeutic agents). This represents a huge step in cancer research.

U.S. Food and Drug Administration: Botulinum Toxin: A Poison That Can Heal