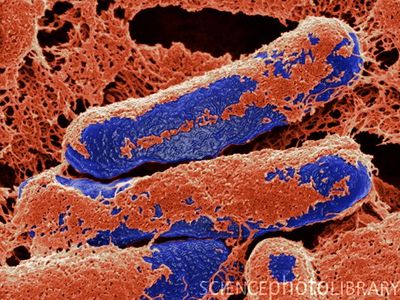 Clostridium botulinum is a rod-shaped, gram positive bacteria that produces heat and chemical resistant endospores (See Figure 1. above). The bacterium is a soil dwelling anaerobe that produces a potent neurotoxin. The toxin produced by this bacteria is one of the most deadly naturally produced substances known to man. A single gram of toxin from Clostridium botulinum is a lethal dose for 200,000 mice, and a cup of the toxin in its pure form would be enough to depopulate the entire earth![1]

The symptoms of botulism were first described by Justinus Kerner in the early 1820's. Kerner named the disease botulism after the Latin word for sausage, owing to the fact that much of the food poisoning was attributed to the undercooked breakfast meat. The bacteria itself and its neurotoxin was classified by Professor Emile Pierre van Ermengem of the University of Ghent, Belgium in 1895 [2]


There are seven identified toxins produced by seven of strains of the C. botulinum, types A-G. Each strain when cultured has produced toxins of different specificities.
The neurotoxins of Clostridium botulinum cause paralysis and ailments such as infant botulism, wound botulism, and botulism poisoning.

The most common form is through food poisoning. Factors that encourage this reproduction include an anaerobic environment, a pH of 4.6 or higher, warm temperatures, an elevated moisture content, and a lack of competing bacteria. Vegetables with low acid contents like okra and asparagus make good hosts for botulinum toxin, as are incorrectly prepared meats and canned goods [3].

Infant botulism most frequently is caused by the ingestion of honey by neonatals under one year of age. Wound botulism is much rarer and similar in it's symptoms to tetanus, it is often found among users of heroin [4].

The neurotoxin of Clostridium botulinum is also used medicinally and can be quite effective. It is the first biological toxin which is licensed for treatment of human diseases. The toxin is useful in treating certain neurologic disorders characterized by involuntary muscle spasms: dystonia, blepharospasm (uncontrollable blinking), spasmodic torticollis (crossed eyes), writer’s cramp, hemifacial spasm, spasticity in stroke, cerebral palsy [5]. The neurotoxin from C. botulinum is also the chemical behind the cosmetic procedure of Botox. A small dose of botulinum toxin can be used to prevent the formation of wrinkles by temporarily paralyzing facial muscles. 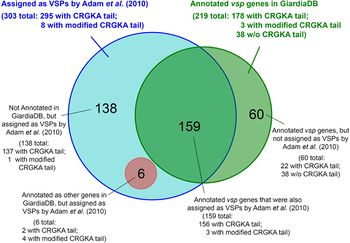 The complete genome of the A strain of the C. botulinum was sequenced in May 2007 at the Sanger Institute[6].

The topography found in this organism is a circular model of DNA. The complete chromosome of the bacteria is 3,886,916 nt. In the organism there are 3,776 genes, 81% of which are coding genes.

Figure 2, to the right, is a representation of the sequenced genome of Clostridium botulinum.

Similar to other members of the Clostridium genus, there is a low cytosine-guanine, 28% in C. botulinum.

The bacterium contains a 16.3 kilobase plasmid, containing 19 coding genes, with a guanine-cytosine content a little lower than that of the chromosome -- 26.8%.[7]

The plasmid however does contain several genes needed for replication: dnaE, which encodes for the alpha subunit of DNA polymerase III as well as the genes that encode the ABC-type multidrug transport ATPase.

The Clostridium botulinum genome contains a large number of genes that encode for secreted proteases and enzymes used for the uptake and metabolism of amino acids. [7]

The genome of Clostridium botulinum also shows the bacteria to have the ability to degrade chitin.

The Strickland reaction uses two different amino acids, in a process called coupled deamination, where one amino acid acts as the electron donor and the other as the electron acceptor. The reaction is used by organisms such as Clostridium botulinum as a sole source of carbon and nitrogen. Some of the amino acids that are used as hydrogen donors are alanine, leusine, isoluecine, and valine. Other amino acids are used as hydrogen acceptors such as glycine, proline, hydroxyproline, and orthinine. The reaction results in the production of CO2 and a nitrogen source, most commonly NH3[9].

C. botulinum is most commonly found in the soil and freshwater sediment. The bacteria also can live in animal intestines and be found in animal feces. The endospores of C. botulinum can be found in numerous environments, various foods and sewage due to their resistant nature. The spores of the bacteria are not usually found in human feces unless the human has contracted boltulism.[10]

C. botulinumstrains have been isolated from all over the world -- Asia, Europe, North and South America, Africa -- every continent but Antarctica, and at depths of up to 6400ft and altitude up to 11,000ft.[10]

The reproduction of endospores requires non-halophilic salinities and anaerobic conditions.[10]

C. botulinum is often found in improperly canned goods; the improper preparation does not heat the cans to a high enough temperature to denature the C. botulinum endospores, allowing the bacteria to survive leading to potential ingestion by human consumers. Foods which cannot be heated to temperatures high enough to kill the endospores should take other precautions to prevent colonization of the Clostridium botulinum, such as maintaing a pH below 4.6 which will not harbor the bacteria.[10] 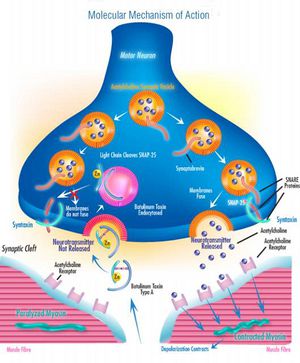 Figure 3. A visual description of how the Botulinum Toxin A works inside of the synaptic cleft, blocking nerve activity and causing paralysis. Courtesy of Magnus Medicine.[3]

The C. botulinum neurotoxins are the most potent toxins known, with as little as 30–100 ng constituting a potentially fatal dose.[10]

The most common occurrence of botulism poisoning is caused by ingestion of a toxin that is produced by the Clostridium botulinum bacteria. There are three types of botulism poisoning: the most common is from ingestion of the bacterial spores. Other types include wound botulism, where open wounds can become colonized by the bacteria. The third type of poisoning is infant botulism, where infants ingest the bacterial spores and suffer from the symptoms of the toxin. The toxin is a neuro-active high molecular weight protein, which comes in seven different variations, types A through G.

If food containing spores of this organism is ingested, the bacteria can grow and produce the toxins which are then taken up by the body. The symptoms of the toxin do not manifest until about one to two months after the ingestion of the contaminated food. It starts by affecting several groups of nerves in the head. These symptoms can appear as drooping eyes, loss of facial expression and difficulty chewing and swallowing. The paralysis is descending and spreads to the rest of the body. The toxin effects not only voluntary muscles, but also the involuntary muscles. This can manifest in respiratory problems. The toxin also affects various parts of the autonomic nervous system. This can lead to symptoms such as dry mouth, and hypotension, and constipation. Overall the most clinically recognized symptoms are descending paralysis, lack of fever, and clear mental abilities.

In 2011, researchers from the United States Army Medical Research Institute of Chemical Defense and the University of Rhode Island worked to devise a novel approach to working with the botulinum toxin. Currently there is no pharmacological treatment to save the (BoNT)-mediated paralysis of neuromuscular signaling once effected by the neurotoxin. A major factor for this is there is currently no effective model of a cell culture system that is neuron-based,which would allow for a detailed look at the mechanisms behind the botulinum toxin pathogenesis. McNutt et Al [12] have developed a technique to create "highly enriched, glutamatergic neurons from suspension-cultured murine embryonic stem (ES)" cells. Believing that the stem cell derived neurons (ESNs) would be a appropriate platform to investigate the neurotoxicology of the botulinum toxin; these stem cell derived neurons form synapses and express proteins necessary for BoNT activity. ESNs remain viable and susceptible to the toxin for up to 90 days after plating, allowing for long term investigation on the toxin-specific mechanisms underlying "persistence of synaptic blockade". The use of ESNs also resolves issues of cost and reproducibility associated with approaches based on primary neurons and neurogenic cells.The ESNs are a "novel, biologically relevant model system that combines the verisimilitude of primary neurons with the genetic tractability and scalable expansion of a continuous cell line", therefore there use in the botulinum toxin research should significantly accelerate BoNT research and drug discovery while decreasing animal use.

Accordingly, the current research of Heyue Zhou, Bin Zhou, Sabine Pellet, Eric A. Johnson and Kim D. Jand has great significance for the treatment of the neurotoxins. They were interested in the Botulinum neurotoxins (BoNTs) and strived to determine the first human monoclonal antibodies that are anti-BoNT/B. BoNT/A and BoNT/B are the leading causative agents in infant botulism. Better and more efficient alternatives are being researched to replace the existing antitoxins, which are limited in several ways that prevent them from being as efficient as others could be for the botulism.

The development of cell-based assays for the in vitro manipulation of F2 human monoclonal antibody binding with BoNT/B showed that it can serve as an essential antibody. The use of the surface plasmon resonance method and assessment of the results helped to verify whether its ability to specifically bind and neutralize the causative agent supported the possibility of the F2 human monoclonal antibody being a beneficial selection for anti-BoNT/B.[13]

Figure 4. The facial muscles effected by the C. botulinum neurotoxin during the procedure of Botox. Photograph Courtesy of S.Sean Younai, MD. [4]

As of 2007, Botox is the most common cosmetic operation, with 4.6 million procedures in the United States, according to the American Society of Plastic Surgeons. As of 2011, over 11 million women have had the procedure [14].

Botox works by cutting off communication between nerve cells and destroying a protein that controls neurotransmitters, SNAP-25. The result is a temporary paralysis of muscles that form furrows, wrinkles, and various other facial lines. This effect generally stays for 4 to 6 months, and then the paralysis wears off [15].

Figure 4. is a diagram of the facial muscles effected during the Botox procedure.

The procedure requires no anesthesia. Doctors may numb the area with a cold pack or anesthetic cream but discomfort is typically minor [14].

The doctor gives a few small injections of the toxin directly into the muscles of the face that cause wrinkles and lines.

There has not been a confirmed case of any serious spread of the toxin effect when BOTOX® Cosmetic has been used at the recommended dose.