Clostridium cellulolyticum strain H10 is a gram-positive, rod-shaped, anaerobic, mesophillic cellulolytic bacterium. The bacteria was first isolated from compost containing decayed grass. Studies have confirmed that this microbe is not a part of any ruminant system.

The ability of Clostridium cellulolyticum H10 to degrade cellulose is an active area of research. Two products of interest from the cellulose degradation by this organism are ethanol and hydrogen, which can be used as an alternative source of energy. Both hydrogen gas and ethanol have gained attention for many reasons. They have much lower emissions than fossil fuels, allowing for them to be cleaner sources of energy, as well, they are sustainable, allowing for them to be easily regenerated in human life-times, as opposed to millions of years, and in general, hydrogen and ethanol are thought to be environmentally sound in production. These products could even contribute to the lowering of the increasing trend in greenhouse gases when used as a replacement for fossil fuels. This makes Clostridium cellulolyticum H10 extremely significant as it undergoes processes that could become the source of knowledge leading to commodities such as biofuels. 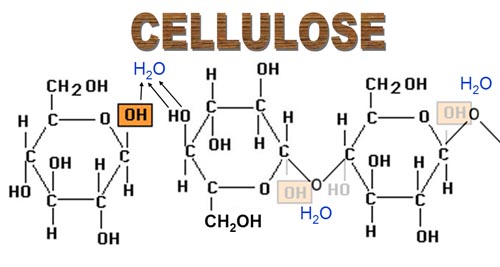 Clostridium cellulolyticum H10 has a circular genome consisting of 4,068,724 base pairs. The sequencing of this genome is relatively new and very little is known about the specific functions of the sequence. 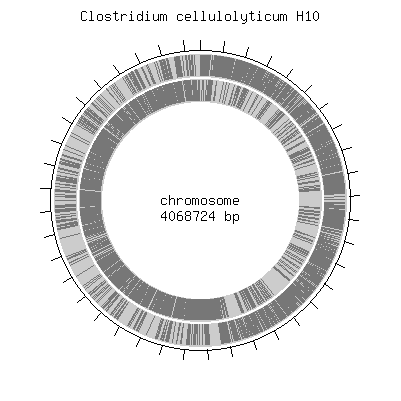 Clostridium cellulolyticum H10 is a gram-positive rod-shaped bacterium. This bacterium gains its energy by fermenting cellulose in a process called aceto-lactic fermentation with the use of an extracellular enzymatic complex, the cellulosome. Some of the byproducts that this bacterium produces are acetate, lactate, hydrogen and ethanol, which can be used as possible biofuels in the future.

This is a generic diagram of what a typical cellulose degrading anaerobe looks like. Further sequencing of this genome will reveal the efficient processes by which this microbe is able to utilize cellulose, ultimately contributing to the production of a commercialized fermentation unit used for alternative energy production.

This is Clostridium cellulolyticum H10

Clostridium cellulolyticum H10 plays an important role in the carbon cycle, by consuming the carbon stored as cellulose. A paper recently noted, "microbial cellulose utilization is responsible for one of the largest material flows in the biosphere" (Giallo et. al., 2). It’s important to note that this carbon cycling is affected both locally and globally. This bacterium is not just a region-wide contributor of carbon dioxide consumption, but is so ubiquitous that the bacterium is significant in making a global change, one that may be relied heavily on in the future if current trends of global warming continue to increase. It will be critical to understand the ecological interactions of this bacteria and the biosphere to correctly apply it to the mass production of renewable resources, but as of now, little published information is available.

Not surprising, since very little information is available about the ecology of this bacteria, even less is available regarding the pathogenesis. So far, it seems that this bacteria is not part of any notable symbiosis. Its highly possible that one exists, but it hasn’t been categorized yet.