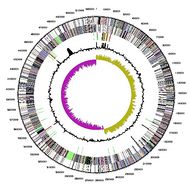 C. cellulovorans obtains energy through the fermentation of cellulose and other carbohydrates. Apart from cellulose, C. cellulovorans ferments various carbon sources, such as xylan, pectin, cellobiose, glucose, fructose, galactose, sucrose, lactose and mannose and the fermentation products are hydrogen, carbon dioxide, acetate, butyrate, formate and lactate. When grown in cellulose, C. cellulovorans forms ultrastructural protuberances, which may be aggregation of smaller cellulosome complexes, also known as polycellulosomes. These protuberances were detected only in cellulose-grown cells and disappeared rapidly when other soluble carbohydrates were added to the growth medium. Cellulosomal components synergistically interact to catalyze the degradation of cellulose and hence, cellulosome acts as a macromolecular machine. 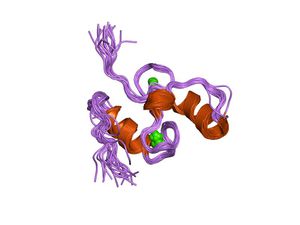 C. cellulovorans has no reported demonstration of mutualism in its environment, however, it does exhibit synergistic enzymatic relations within the cellulosome. Cellulosomes are complexes of cellulytic enzymes created to fuel the cell. The components of the cellulosome include dockerins, cohesions, enzymatic subunits, an anchoring protein, a carbohydrate binding domain and a scaffoldin subunit. Synergistic relations were discovered between cellulases (enzyme subunits), which affect cell wall degradation activity. Studies show individual cellulases liberate sugar at low rates but when xylanase is added to the cellulosome, rates increased dramatically. Synergistic relations between cellulosomal enzymes are important for studying effective degradation of organic plant life into usable fuel sources. Strong binding affinities of carbohydrate binding domains (CBD) in cellulosomes have also have provided important medical relevancy. The CBD can be used to bind cell signals for T cell activation which reduces the opportunity for graft-versus host disease in transplant patients.