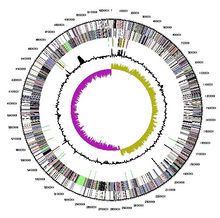 C. cellulovorans do not reduce sulfate and are obligate anaerobes. Cells are 0.7 to 0.9 by 2.5 to 3.5 µm in size and are non-motile rods, though peritrichous flagella were detected under electron microscopy. Both spores and vegetative colonies of C. cellulovorans are irregular, containing opaque edges and hollow centers. Spores are oblong that occur either centrally or subterminally within the mature sporangium. It produces plant cell wall degrading extracellular multienzyme complex called cellulosome. When grown in cellulose, C. cellulovorans forms ultrastructural protuberances, which may be aggregation of smaller cellulosome complexes, also known as polycellulosomes. These protuberances were detected only in cellulose-grown cells and disappeared rapidly when other soluble carbohydrates were added to the growth medium.