Difference between revisions of "Clostridium difficile" 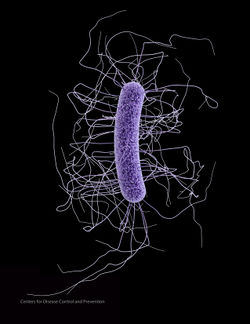 Image of Clostridium difficile From: CDC.gov [1]

A Microbial Biorealm page on the genus Clostridium difficile

C. difficile is found in nature in water, air, human and animal feces, on most surfaces (especially in hospitals) and most prevalently in soil. C. difficile shows optimum growth when at human body temperature (37℃) and appears as long drumsticks with a bulge at each end.


C. difficile was first isolated by Hall and O’Toole from the meconium and feces of newborn infants.(16) It is important enough to have its genome sequenced because it provides a better tool for preventing and controlling infection. The genome also reveals clues as to how the pathogen thrives in the GI tract and why some strains are so much more virulent than others. The genome of C. difficile can also explain their antimicrobial resistance and allow for quicker detection and better treatment options. In addition, it allows scientists to correlate different toxins and genes and their disease-causing ability.(4)

C. difficile Strain 630 (epidemic type X) has a single circular chromosome with 4,290,252 bp (G+C content = 29.06%) and a circular plasmid with 7,881 bp (G+C content = 27.9%). The whole genome has been sequenced and found that 11% of the genome consists of mobile genetic elements such as conjugative transposons. These elements provide C. difficile with the genes responsible for its antimicrobial resistance, virulence, host interaction and the production of surface structures. For example, the cdeA gene of C. difficile produces a multidrug efflux pump which was shown to be homologous to known efflux transporters in the multidrug and toxic compound extrusion (MATE) family.(15) The protein facilitates energy-dependent and sodium-coupled efflux of drugs from cells. In addition, the cme gene in C. difficile has been shown to provide multidrug resistance in other bacteria.(4,14)

C. difficile is a gram-positive spore-forming anaerobe.(18) It expresses two S-layer proteins one of which is highly conserved among strains and one which shows sequence diversity. Both proteins are derived from a single gene product and both are associated with amidase activity.(5) It requires five amino acids (Leu, Ile, Pro, Trp and Val) for energy metabolism and addition of Gly increases growth significantly.


C. difficile undergoes amino acid fermentation in order to create ATP as a source of energy and can also utilize sugars.(9) During C. difficile’s exponential phase of growth (when there were sugars available in the medium i.e. glucose) expression of toxin A and B was repressed but showed a significant increase once the bacteria began stationary phase. By prioritizing growth over toxin production the bacteria can grow and colonize as much as possible before starting to produce toxins which also indicates that the genes for toxin A and B undergo some type of catabolite repression.(29)

C. difficile is not a major constituent of the microflora in colons of healthy adult humans or animals but can grow to large populations in people that are treated with antibiotics, especially broad-spectrum antibiotics. This is because the antibiotics kill off the normal flora of the intestines leaving C. difficile to freely grow and colonize the intestine. As long as other organisms are around C. difficile cannot grow due to limited resources and space, however, there is nothing stopping it from growing out of control in the absence of other microorganisms.


When under extreme conditions such as the low pH environment of the stomach, high heat or when under attack by antibiotics C. difficile can form spores which can survive for up to two years and withstand extreme conditions. The spores can then convert to the active form of C. difficile when conditions are favorable and allow the bacteria to grow.(11,13) In addition, when C. difficile undergoes stress (i.e. osmotic, acid and heat shock) its ability to adhere is increased (by increasing expression of surface proteins) allowing it to attach to human tissue cells more easily facilitating its colonization.(30)

Overgrowth of the bacteria in the intestines of human and animal hosts leads to buildup of its toxins and their deleterious effects. It can be transferred from person to person through the fecal-oral route.(1) Most often C. difficile is acquired nosocomially (contracted secondary to being hospitalized).(2,19)


C. difficile produces two virulence factors: enterotoxin (toxin A) which is found in 70% of strains and cytotoxin (toxin B) which is found in all strains.(12) The toxins inactivate Rho GTPases by glucosylating them and disrupt tight junctions in intestinal epithelial cells leading to increased paracellular permeability which leads to fluid secretion (diarrhea), mucosal injury and inflammation.(8)


“Expression of C. difficile toxins A and B and their sigma factor TcdD is controlled by temperature”; they become upregulated when the temperature is shifted from 22℃ to 37℃ which is an adaptation to their mammalian hosts.(6) C. difficile toxin B gets cleaved by a factor in the eukaryotic target cell thereby permitting its cellular uptake.(7,10,17)


Patient symptoms with C. difficile intestinal infections include diarrhea, inflammation, fever and abdominal pain. The inflammation associated with C. difficile infection has been shown to be caused by toxin B’s interaction with mast cells which release inflammatory granules in addition to toxin A causing an increase in expression of prostaglandins.(26) C. difficile is responsible for almost all cases of antibiotic associated pseudomembranous colitis which involves many of the above mentioned systems.(3) In addition, it has been found that even strains of C. difficile that lack toxin A (A-B+) are still capable of causing pseudomembranous colitis.(21,22)


The most common treatment for C. difficile-associated diarrhea or pseudomembranous colitis is either vancomycin or metronidizole since no strain of the bacteria has yet been found to be resistant to those antibiotics.(25) Patients with C. difficile infections are also commonly found to have leukocytosis and thrombocytosis and the presence of these conditions can be used to test for the likelihood of C. difficile infection.(23)

None are currently known

One current study regarding Clostridium difficile-associated diarrhea (CDAD) looked into a possible association between CDAD and taking proton pump inhibitors (PPIs). The study found that taking PPIs can increase one’s risk for contracting CDAD especially if that person is already hospitalized but further research must be done to establish a definitive connection.(24)


Another study looked at how effective metronidazole was at killing two specific strains of C. difficile. Firstly, they observed that one strain produced its toxins for much longer than the other strain which resulted in more severe symptoms. In addition, they found that metronidazole was not as effective at killing C. difficile as expected due to its reduced concentration in the gut which they predicted was caused by inactivation by other gut bacteria.(27)


Efforts have also been made to create a vaccine against C. difficile in order to prevent it from colonizing the human gut. A group used C. difficile surface proteins as antigens for their vaccines which they administered to a mouse model. One of the surface proteins that they used was a flagellar cap protein and they immunized the mice in a variety of different ways to test which was most effective. They observed that delivering the immunization via the rectum was most effective and that mice that received the vaccine had significantly lower levels of C. difficile colonization.(28)

(3)Bartlett, J.G. “Clostridium difficile: history of its role as an enteric pathogen and the current state of knowledge about the organism”. Clin Infect Dis. 1994 May;18 Suppl 4:S265-72. http://www.ncbi.nlm.nih.gov/sites/entrez?cmd=Retrieve&db=PubMed&list_uids=8086574&dopt=Abstract

(16)Hall I, O'Toole E. "Intestinal flora in newborn infants with a description of a new pathogenic anaerobe, Bacillus difficilis". Am J Dis Child 1935 49: 390.

(24)Shaheen, M., Akhtar, A. “Increasing incidence of Clostridium difficile-associated diarrhea in African-American and Hispanic patients: association with the use of proton pump inhibitor therapy”. J Natl Med Assoc. 2007 May;99(5):500-4 http://www.nmanet.org/images/uploads/Journal/OC500.pdf