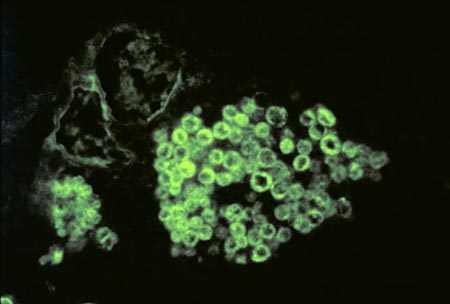 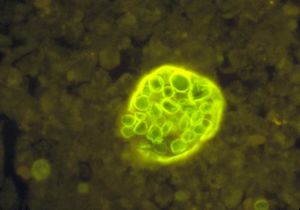 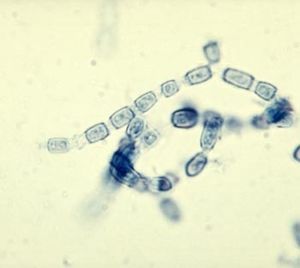 Coccidioides immitis is a dimorphic fungus that exists in two distinct forms, saprophytic and parasitic. In the soil, the organism exists as a mold with septated hyphae resembling a shape of a barrel. When entering a host, the arthroconidia (spores) break off from the hyphae and evolve into round structures called spherules. Then when inside the host, spherules grow and undergo internal division, forming smaller structures called endospores. Large spherules can rupture to release packets of endospores, resulting in new foci of infection within the host (2). The main habitat ofCoccidioides immitis is in soil (14)

Formal description of Coccidioides immitis was performed by Rixford and Gilchrist from a case observed in California in 1986 (3). However, the parasite was then still thought to be a protozoan. The correct taxonomic status of C. immitis as an ascomycete fungus was demonstrated by Ophuls and Moffit in 1900 (4) by culture on artificial of the fungal mycelia. It is important to have its genome sequenced because Coccidioides immitis, along with its relative Coccidioides posadasii, can cause a disease called Coccidioidomycosis (Valley Fever), and it is a rare cause of meningitis, mostly in immunocompromised persons, and the disease can be fatal. Persons afflicted with HIV/AIDS are highly susceptible to Coccidioidomycosis and suffer a high mortality rate from the disease. (5).

The current total unique contig length of Coccidioides immitis genome is 28,876,843 base pairs(7); the estimated genome size is 29 Mb. Also, Coccidioides immitis strain RS was sequenced by way of sequencing each end of plasmids and Fosmids from randomly sheared fragments of 4 kb, 10 kb, and 40 kb average size(6)(7). Coccidioides immitis strains contain either a MAT1-1 or a MAT1-2 idiomorph, which is 8.1 or 9 kb in length, respectively, the longest reported for any ascomycete species. MAT1-1 and MAT1-2 contain four or five genes more than are present in the MAT loci of most ascomycetes. Along with their cDNA structures, all genes in the MAT loci are transcribed (6). An analysis of 436 Coccidioides isolates from patients and the environment indicates that in both Coccidioides immitis and C. posadasii, there is a 1:1 distribution of MAT loci, as would be expected for sexually reproducing species. The current assembly contains 50 sequence contigs in 7 supercontigs (7).

The Coccidioides immitis SOWgp gene was also isolated; SOWgp encodes an immunodominant, spherule outer wall glycoprotein that is presented as a component of a parasitic phase-specific, membranous layer at the cell surface. SOGwgp translates a 422-amino-acid polypeptide that contains 6 copies of a 41 to 47 residue tandem repeat enriched in proline (20.4 mol%) and aspartate (19.7%)(8). The recombinant polypeptide (rSOWp) was shown to bind to mammalian extracellular matrix proteins in an in vitro assay, suggesting that the parasitic cell surface antigen may function as an adhesion. Deletion of the SOWgp gene by using a targeted gene replacement strategy resulted in partial loss of the ability of intact spherules to bind to ECM proteins and a significant reduction in virulence of the mutant strain. The parasitic cell surface glycoprotein encoded by the SOWgp gene appears to function as an adhesion and contributes to the virulence of C. immitis.(8)

Cell wall: Like most pathogenic fungi, the cell wall of Coccidioides immitis is rich in chitin and chitin metabolism is a reasonable target for the design of antifungal agents. The antigenic composition of an alkali-soluble, water-soluble cell wall extract of Coccidioides immitis is heterogeneous in composition,(11) containing two distinct antigenic components. One is present as a polymer that is antigenically identical to a polymeric antigen in coccidioidin, designated antigen 2. The other component presented an unusual precipitin pattern in that a cathodal leg was demonstrable in the absence of an anodal leg (9). The fungal cell wall also contains mannoproteins and glucans. Any disruption in its integrity should affect growth. The cell wall provides a unique therapeutic opportunity for antifungal agents by targeting a structure not found in mammalian cells. The echinocandins are cyclic hexapeptides, members of a new class of antifungal agents. They appear to inhibit the synthesis of 1, 3-β-d-glucan, a major cell wall component which provides structural integrity and osmotic stability in most pathogenic fungi (10).

The distribution of Coccidioides immitis has been shown to be restricted to America through ecological and epidemiological studies. Coccidioides immitis has been known for its saprophytic nature, tolerance for high soil salinity in climates of high temperature and low rainfall (14). Epidemiological studies and case reports have extended the apparent range of this organism; however, almost all soil isolates in Arizona and California have been from areas with the physical and biotic parameters of this zone. The repeated isolation of C. immitis from the soil has been from small, well defined areas (14). C. immitis has been observed to grow in the soil if naturally infected soil is simply enriched with sterile water. The ease with which it can be grown is paradoxical to its naturally restricted distribution to soils in endemic areas (15). Animals, although not the major natural reservoir, cannot be ignored as possible factors in the ecology of C. immitis. Currently, Coccidioides immitis is an endemic in the United States. 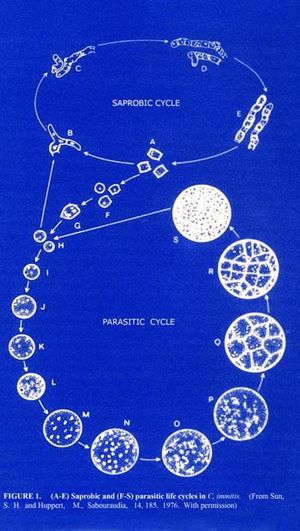 Currently, direct smear and culture are the most common means of identifying Coccidioides spp. These methods offer relatively sensitive and specific means of detecting Coccidioides spp., but may take up to 3 weeks, potentially delaying the diagnosis and initiation of appropriate antifungal therapy. There was a need for a rapid and safe means of diagnosing coccidioidomycosis, so a real-time PCR assay to detect Coccidioides was developed and allowed to identify Coccidioides directly from clinical specimens. Primers and fluorescent resonance energy transfer (FRET) probes were designed to target the internal transcribed spacer 2 region of Coccidioides. The sensitivity of the assay testing 148 paraffin-embedded tissue samples is 73.4%. A rapid method for the detection of Coccidioides spp. directly from clinical material will greatly assist in the timely diagnosis and treatment of patients, while at the same time decreasing the risk of accidental exposure to laboratory personnel. (21)