Difference between revisions of "Compost pile"

Compost is decomposition of Organic Matter such as kitchen scraps, wood shavings, yard trimmings, paper and cardboard. Compost supplies nutrients and advantageous life to the soil, develops better soil structure, and helps prevent overflow that can contaminate water streams such as rivers and lakes. Compost helps the soil soak up and preserve nutrients and provides plants protection from pests and diseases. Moreover, compost provides moisture which means less watering where you can conserve water and prevent river or lake pollution. Compost introduces and feeds diverse life in the soil, including bacteria, insects, worms, and more, which support vigorous, plant growth. Compost pile also helps yard protection during rainstorm. An excess of nutrients in water can deplete the oxygen available to fish and other aquatic life.1

Figure shows:Bacteria, fungi, and other microbes, these organisms make up a complex food web or energy pyramid with primary, secondary, and tertiary level consumers. The base of the pyramid, or energy source, is made up of organic matter including plant and animal residues. Organic residues such leaves or other plant materials are eaten by some types of invertebrates such as millipedes, sow bugs, snails and slugs. These invertebrates shred the plant materials, creating more surface area for action by fungi, bacteria, and actinomycetes (a group of organisms intermediate between bacteria and true fungi), which are in turn eaten by organisms such as mites and springtails.2

Thermus
Highest compost temperatures, bacteria of the genus Thermus. Gram-negative bacteria likes ideal growth temperature of between 70°C and 75 °C with pH range between 7.5 to 8.0.

Brucella abortus
Gram-negative rod shaped bacteria, does not contain flagella or pili, nor do they create capsule slime. In addition they does not produce spores. Brucella abortusare know as heterotrophic bacteria as they can use either anaerobic or aerobic respiration.

Enterobacter cloacae
A rod-shaped, gram-negative bacteria and likes to live in mesophilic temperature (below 40 °C)
Methylococcus capsulatus
Negative-gram bacteria that lives in thermophilic temperature (45°C). They are closely related to Enterobacter cloacae. Methanotrophic bacteria is able to generate the greenhouse gas, methane, as an energy source for growth.8 Methanotrophs are a physiologically distinct group of bacteria characterized by their ability to use methane as the sole source of carbon and energy.Composting is a self-heating, aerobic microbial decomposition of organic materials. A typical composting process goes through a series of phases, including a rapid temperature increase, sustained high temperatures and a gradual cooling of the composting mass. Different microbial communities dominate during these various composting phases, each adapted to a particular environment 9

Strain KC of P. stutzeri could be used for bioremediation as it can degrade carbon tetrachloride.4Pseudomonas stutzeri is not fluorescent like other members of genus Pseudomonas and are denitrifying bacterium.In spite of marked differences from the type strain of the genus, the sequence similarities of the rRNAs, demonstrated initially by DNA-rRNA hybridization, show the legitimacy of the inclusion of P. stutzeri in the genus Pseudomonas. Strains of the species have been identified among denitrifiers found in natural materials. Related species within the genus, such as P. mendocina, P. alcaligenes,P. pseudoalcaligenes, and P. balearica.5

importance. The effects of extreme pH on the composting process are directly related to the effect of pH on microbial activity or, more specifically, on microbial enzymes.12

In the process of composting, microorganisms shatter down organic matter by producing carbon dioxide, water, heat, and humus. Under optimal conditions, composting proceeds through three phases: 1) the mesophilic, or moderate-temperature phase, which lasts for a couple of days, 2) the thermophilic, or high-temperature phase, which can last from a few days to several months, and finally, 3) a several-month cooling and maturation phase.

Figure 2 Different communities of microorganisms predominate during the various composting phases. Starting decomposition carried by mesophilic microorganisms, which rapidly break down the soluble, readily degradable compounds. Temperature rises above 40°C, the mesophilic microorganisms become less competitive and are replaced by others that are thermophilic, or heat-loving. At temperatures of 55°C and above, many microorganisms that are human or plant pathogens are destroyed. High temperatures accelerate the breakdown of proteins, fats, and complex carbohydrates like cellulose and hemicelluloses, the major structural molecules in plants. Over 65°C kill many forms of microbes and limit the rate of decomposition, compost managers use aeration and mixing to keep the temperature below this point. Final phase of "curing" or maturation of the remaining organic matter.2 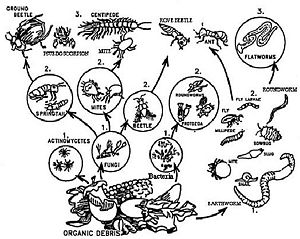 Their incorporation into soil increases fertility (e.g. nitrogen fixers, nitrifiers, sulphur oxidizers), structure (e.g. exopolysaccharide producers), and can have other effects as a result of high activity and population levels, as well as through specific biochemical traits of the microorganisms.Increased numbers of microorganisms in compost also have an indirect role in improving plant health. Microorganisms form symbiotic associations with plant roots and synthesize and excrete nutrients (amino acids,vitamins), plant growth hormones and chelators, alter physical conditions to optimize plant growth, and decompose or neutralize toxic substances. The majority of bacteria isolated from composts were Gram-negative.7 Microorganisms may affect negatively as they compete for oxygen, nutrient which can inhibit metabolic products. Optimal pH values for composting range from pH 5.5 to 8.0. Initial pH of composting are acidic which forms acidforming bacteria. As pH starts to increase and becomes alkaline and finally drops back to near neutral as a result of humus formation.

C:N Ratio plays very important role. Carbon supplies energy in carbohydrates and nitrogen provides growth in proteins which all living organisms requires to survive and the ratio is roughly 30Carbon : 1Nitrogen. However, in order to have a good compost pile you need 25C:30N.

Variation of Oxygen and Carbon dioxide with different temperatures

Figure shows: Windrows passively aerate by conection however, Mother Natures research shows the microbes can strip out the oxygen in compost, within 15 minutes, there must be a constant flow of air through the compost, and far more than provided by passive aeration by convection. Therefore Oxygen is very important to keep continuous compost cycle.

Figure shows: On the active bacteria and CO2in the compost, include the notation that samples 2536 & 2540 were from 18” below top center of a passively aerated windrow of ‘yard waste” 10 & 16 days after the windrow was built. Sample #2541 was taken from that same windrow on day 10, and for the next 6 days was on forced aeration in one of our compost research silo. As aging was the same as 2540, same material, but with the difference that the microbes were not oxygen starved for the last 6 days, resulting in 50X more active bacteria than 2540 where the microbes were oxygen starved.

Anaerobic Composting is decomposition that does not require oxygen for microorganisms to break down biodegradable material. Anaerobic composting in passing, primarily because of two reasons:
1) the process is often referred to as fermentation, and is characterized by very strong odors
2) only a small amount of heat is generated by the process, making the decomposition take a much longer time and not reaching sufficient temperatures to safely kill plant pathogens.13
Aerobic Composting is decomposition that does require oxygen. Micoorganisms uses Carbon,Nitrogen,and phosphorus, and other required nutrients to degrade organic matters.
1) Organic matter
2) Appropriate microorganisms
3) Moisture
4) Oxygen.

Air stimulates the microorganisms that are already in the mix, and their by-product is heated. Rich oxygen eliminate compost odors. However, if there is odors in compost pile you know it's due to anaerobic composing. Oxygen level should always be kept at 5% throughtout the entire pile. Typical oxygen percents range from 6% - 16% in the pile air spaces or in the exhausted air; and 20% at the exposed portions of the pile. Failure to keep all parts of the compost pile above the 5% oxygen level will cause the pile to "go anaerobic", with the accompanying odor problems. The more oxygen, up to at least 10-12 percent, the more quickly the biodegradation will take place. 15

Mother Natures Farm (Magic soil) is located in New york and they are currently working on three compost research silos that are specially modified for capturing the Surplus Microbial Metabolic Heat from early stage compost. Using compost (magic soil) and growing healthly organic food. "We expect to massively expand our Research growing, because demand for finished compost is totally dependant upon how well plants thrive in the finished product." Pathogens like E-Coli 0157 can easily be killed by the high temperatures easily achieved in well managed composting. How Much Air is Required to hold the CO2 level down to 2%? (oxygen level about 19%) Mother Nature are currently researching on how to get 200 times more fungal density than “normal” in the industry; enabling us to significantly speed up the composting process. According to their experiment microbes can strip out the oxygen in compost, within 15 minutes, there must be a constant flow of air through the compost, and far more than provided by passive aeration by convection

Planting Milkwood Kirsten Bradley and Nick Ritar are how-tos on everything from composting, chook sheds and carrot cake through to straw-bale building and no-frills greywater re-use, and we will be documenting the process of planning, building, stepping on rakes, establishing forests and gardens. They also provide courses on how to make calculator compost C:N ratio and designing water landscape and preaching the importance of water. Basics of Permaculture as it applies to the Australian environment and how to make living environment a better place by composting.

Thanks to Dr. Dan Lineberger Department of Horticultural Sciences and Wayne McLaurin, Georgia Cooperative Extension Service and the Texas Cooperative Extension Solid and Hazardous Waste Managment Initiative Team. For providing images such as overall compost cycle.
Thanks to Mr. John A. Crockett for sharing very informative information on Magic bio Soil(Mother Nature’s Farms, Inc). Their mission is to convert organic wastes into high quality soils and soil conditioners for all those involved in growing plants, landscapers, homeowners, and nurseries. We are committed to being a very good neighbor in the process, earning neighbor and community respect and support, not just tolerance. We will continue to do research in the areas of process and end product enhancement. As you can see the outcome of composting he was able to produce healthy food. 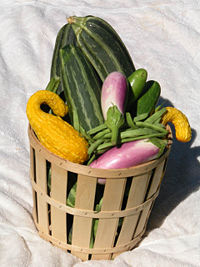