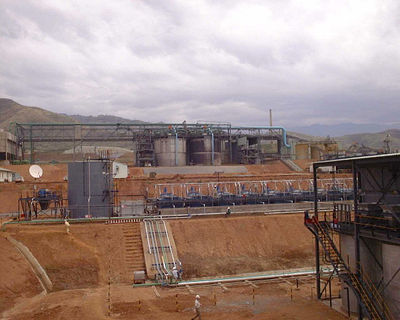 
Copper has been one of mankind's most important metal resources since the beginning of civilization, and to this day it holds and important role in the functioning of modern society. It's main uses include piping, coinage, electronics, and even antibiotics (Wikipedia: Copper [1]). In 2009, global copper consumption topped 21 billion tons (Copper Development Association), and that kind of demand has led to the development of sophisticated mining techniques.

Copper is rarely found in its native form; most often it exists as ores made up of various copper sulfides and oxides that have little practical value of their own (Australian Atlas of Minerals, Resources, and Processing Centres). As such, methods for mining copper involve long and complex chemical processes to produce metal from the ores. This involves using harsh chemical reagents to pull the ore from the rock, and subsequent treatment to further isolate the metal and extract pure copper. These processes are energetically expensive, and they create a significant amount of pollutant chemicals such as sulfur dioxide and cyanide (Copper Mining Info [2]).

A viable alternative to these harmful procedures is biomining, or the use of bacterial metabolic processes to assist in the solubilization of metal ores. Acidothiobacillus ferrooxidans is a lithoautotroph famous for using ferrous iron (Fe2+) as an electron donor along with elemental sulfur. They grow in subterranean mineral deposits and even sewer pipes (Slonczewski and Foster 2011), and their activity has been linked to the processing of mineral ores (Rawlings 2002).

Figure 2. Outline of the heap leaching process. After irrigating the heap with a lixiviant, the copper-containing leach liquor is collected and processed by solvent extraction and electrowinning to yield copper metal. (Rawlings 2002)

Modern biomining processes are large-scale operations that involve the mining of ores and processing for several months (Fig. 1). Either through strip-mining or blasting, raw ore is obtained for extraction of copper.

The ores obtained from mining are crushed and piled up to 10 meters high atop plastic irrigation pads, whereupon water seeded with acid, called the lixiviant, is irrigated through the heaps and collected (Fig. 2). After performing the next steps to extract the copper dissolved in the leach liquor, it is recycled and used to irrigate the heap again (Rawlings 2002).

The isolation of copper metal from leach liquor is a two-step process (Wikipedia: Copper Extraction Techniques [3]). The leach liquor obtained after heap irrigation has a very low concentration of copper dissolved into it, around 0.5 - 2.0 g/L. Through solvent extraction, the copper is transferred from the dilute liquor to a more concentrated solution. Afterward, the dissolved copper ions are transformed to solid copper metal through a process called electrowinning that uses an electric current to reduce the dissolved metal and deposit it onto a cathode, at which point the solid elemental copper metal can be employed for its many uses (Siddiqui et al. 2009).

Figure 3. At. ferrooxidans binds to a metal sulfide substrate by way of an extracellular polymer matrix. The redox cycling conducted in the matrix helps to sustain the bacterium. (Valdés et al. 2008)

There has been much debate over how At. ferrooxidans contributes to the conversion of metal ores into soluble compounds. Although it has been proposed that the bacterium produces enzymes which directly mediate the reaction, studies have shown that iron is the only metal ion used to produce energy (Mignone and Donati 2004). Copper is not a metabolite of At. ferrooxidans, so the bacteria is not directly responsible for the solubilization of copper. Rather, it occurs through an abiotic reaction between the copper ores and the ferric ions and protons produced by the metabolic activities of the bacteria. These reactions regenerate the reduced iron and sulfur compounds that the bacteria reuptake to start the cycle anew.

At. ferrooxidans has a diverse set of metabolic processes that allow it to be lithoautotrophic, but the most economically important activity this bacterium performs is the oxidation of ferrous iron (Fe2+) to ferric iron (Fe3+):

...and the oxidation of elemental sulfur (So) to sulfuric acid (H2SO4):

Copper oxides like azurite are somewhat less susceptible to attack by ferric iron; however, they are highly soluble in the low-pH solution produced by the bacterial production of sulfuric acid (Iasillo 1999):

This cycling of iron and sulfur maintains an energetically favorable situation for the bacteria; any ferric iron or sulfuric acid produced tends to undergo reduction with mineral ores to be subsequently re-oxidized by At. ferrooxidans. This cycling does not occur in a free-floating environment, however; the bacteria produce an extracellular biofilm made of polysaccharides and lipids which binds them to the mineral substrate and retains the iron and sulfur compounds as they go through the redox cycle (Fig. 3). The biofilm also helps to retain the bacterial cultures in heaps during irrigation (Sand and Gehrke 2006).

Improvements to the Biomining Process 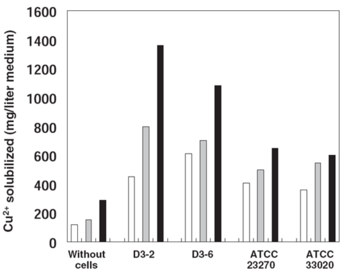 A study done on the copper solubilizing activity of At. ferrooxidans strains isolated from a low-grade copper mine in Chile revealed that when grown in a chalcopyrite-containing medium, a particular strain called D3-2 had a greatly enhanced solubilizing activity in relation to other strains (Fig. 4). The reason for this increased activity is connected to the D3-2 strain's resistance to sulfite (SO32-), a toxic intermediate in sulfur oxidation. Sulfite hinders the activity of iron oxidase, an important enzyme in the bacterium's iron oxidation pathway which provides ferric ions for the solubilization of sulfides (Sugio et al. 1994). Most organisms including At. ferrooxidans possess a sulfite oxidase enzyme that converts sulfite to sulfate under low sulfite conditions (Feng et al. 2007), but this activity tends to be inhibited at higher concentrations. However, the D3-2 strain has a sulfite reductase that is more resistant to sulfite and thus can oxidize it faster, resulting in a lowered sulfite concentration that doesn't inhibit the iron oxidation pathway (Sugio et al. 2008).


One cause for concern regarding the efficiency of the process in regards to the organism is the makeup of the microbial community in a heap reactor. Studies on the composition of the bacterial community have showed that under lower-nutrient conditions and in the presence of certain toxic metals such as arsenic At. ferrooxidans is not the majority member, but rather non-iron oxidizing bacteria such as Thiobacillus caldus (Rawlings et al. 1999). This is problematic because the metabolic activities of these other species do not produce the ferric ions responsible for solubilizing copper sulfates. Improvement of the nutrient conditions in the heap reactor can increase the At. ferrooxidans population, which can be achieved through the addition of phosphate (Varela et al. 1998).

A more inexpensive and immediately practical way than genetic modification to improve biomining is through optimization of industrial techniques. In situ biomining does away with the ore mining process altogether; acidified leach liquor is pumped directly into the ground and the copper is solubilized utilizing preexisting bacteria in the ore deposits. The copper-rich liquor is extracted from wells dug beneath the deposits (Rawlings 2002). By eliminating the physical act of ore mining, a significant portion of the costs is cut from the process.

Bioming has proved to be a cheaper, more efficient, and more environmentally-friendly alternative than non-biologically mediated techniques for copper mining, and the chemolithotrophic bacteria At. ferrooxidans has proven to be an essential part of this process. Much research is still underway to develop improvements, and future applications have included using biologically-engineered bacteria to mine extraterrestrial bodies such as the moon and large meteors (Ragozzine 2004). Whatever directions biomining will take in the future, it will doubtlessly prove to be immensely beneficial in a future with dwindling resources.