Corals are types of marine invertebrates that act as keystone species for one of the most biodiverse ecosystems on Earth, coral reefs. Corals are made up of tiny organisms called polyps. The gathering of thousands of polyps is what creates a coral colony which are the structures we typically think of when we picture a coral. These coral colonies are what form coral reefs. The polyps use symbiosis not just for nutrients but to form the coral skeleton that is made of calcium carbonate. Corals obtain nutrients via coral symbiosis and photosynthesis. However, this photosynthesis is only occurring because of the algae attached to the coral and not the coral itself. Symbiosis occurs with Symbiodinium algae, or zooxanthellae, where the coral acts as the host and obtains fixed organic carbon from the algae while the algae receives inorganic nutrients recycled from the coral’s metabolism (1). 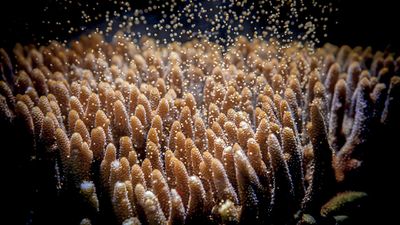 In recent years, biologists have been attempting to engineer new breeds of heat-tolerant coral, specifically by breeding hybrids through cross-breeding (2). Hybridization creates new gene combinations and increases genetic diversity, which can possibly enhance adaptation under new environmental conditions. The fitness of a hybrid relative to the parental species can depend on the gene effect. If the gene effect is additive or over-dominant, the fitness of the hybrid is higher than one or both parents (3). There has been previous research to suggest that interspecific hybrid corals, particularly of Acropora, have had higher fitness than purebred corals and, in the lab, have shown resilience under elevated temperatures (4).

Research conducted recently at AIMS used seven parental species of Acropora to ask whether hybrid Acropora larvae had enhanced survivorship and settlement success compared to the purebreed larvae under ambient and elevated temperatures (4). There are barriers to fertilization however, called prezygotic barriers. This study in particular noted gametic incompatibility and temporal isolation as possible barriers preventing interspecific hybridization in the wild. In temporal isolation of coral, two populations cannot interbreed because they release their gametes at different times, i.e. ‘early spawners’ and ‘late spawners’. In this study, gametic incompatibility was a stronger barrier than temporal isolation and this strength varied between species pairs and the hybrid cross direction. Survival of the hybrid offspring groups was higher or equal to the purebreed offspring, although fertilization rates were lower. Hybrid offspring were also able to settle normally under elevated temperatures. Overall, hybrid offspring demonstrated resilience that could be useful in adapting to climate change. Further research is needed to assess the reproductive success of future hybrid generations.

A recent study reported successful use of the CRISPR-Cas9 gene-editing tool on coral. CRISPR-Cas9 is generally used to introduce changes to genes in the genome, and is a promising tool for the treatment and prevention of human diseases (5). This study generated loss-of-function mutations into three genes of Acropora millepora. They targeted the gene encoding fibroblast growth factor 1 (FGF1a), green fluorescent protein (GFP), and red fluorescent protein (RFP). FGF1a encodes an FGF-signaling ligand, which previous studies have suggested plays a role in sensing the environment or modulating gene expression during larval settlement and metamorphosis (6). GFP and RFP are highly expressed in larvae and responsive to environmental disturbances. Over two nights of spawning, freshly fertilized zygotes were injected either with two or three sgRNA/Cas 9 complexes or with Cas9 protein alone as a control. At least half of the successfully injected larvae had been induced by mutations at the predicted target site. Such presence of mutations suggests high efficiency of genomic editing. Future CRISPR-Cas9 studies are needed to understand gene function in coral focusing on target genes that are likely to give detectable phenotypes. Overall, CRISPR may become an important tool for coral restoration by knocking out genes to identify those that control how coral handles high temperatures and stress (2).

Symbiosis occurs with Symbiodinium algae, or zooxanthellae, where the coral acts as the host and obtains fixed organic carbon from the algae while the algae receives inorganic nutrients recycled from the coral’s metabolism (1). Coral reef bleaching is seen as the main driver of coral decline. Bleaching is the loss of symbionts due to a stressor like high temperatures. In these environmental extremes, coral will be unable to provide for the zooxanthellae and will expel the algae. High temperatures damage the photosynthetic mechanisms of the host’s algae, resulting in overproduction of oxygen radicals (7). This eventually leads to cellular damage, and the expulsion of symbionts to increase survivorship of the host. With the breakdown of symbiosis, coral no longer obtain nutrients.

In recent years, studies have realized the flexibility and diversity of these symbionts. Different species of coral have been shown to contain multiple clades of symbionts. There has been an “adaptive” response to bleaching by increasing heat-tolerant symbionts through symbiont shuffling, or changing symbiont community composition. Many coral taxa are capable of hosting multiple types, so this may possibly play an important role in coral recovery. A 2015 experiment tested the Adaptive Bleaching Hypothesis (ABH) which predicts that partner-switching following a bleaching event may occur by recovery with different symbionts that are better suited to the prevailing conditions (8). The study monitored symbiont shuffling after bleaching recovery at 24°C and 29°C with the prediction that more severe bleaching and a warmer recovery environment promote shuffling towards heat-tolerant symbionts. Shuffling occurred between clades D and B, which refer to different branches of symbionts that share common ancestry. High stress increased proportions of Symbiodinium clade D after recovery, especially at 29°C. Their results reflected the prediction that heat-tolerant symbionts are likely to become dominant after severe bleaching, especially in warmer recovery temperatures. Evidence against the ABH is based on the mass mortality of reef corals following a bleaching event along with a lack of evidence for natural partner recombination. However, the ability of reef corals to become dominated by different symbionts following a bleaching event has been seen in different field experiments (9).

Also, microbial symbionts may have a more rapid capability for adaptation than their coral hosts that have a sexual generation time of 4-8 years, which may be too long for genetic adaptation to keep up with climate change. Within-generational acclimatization and transgenerational epigenetic changes are possible, and can be further enabled by changes in the associated microbial symbionts (10). These rapidly dividing microbes will undergo adaptive evolution faster than genetic adaptation at a population level for their coral hosts. Acclimatization can occur via microbial frequency shifts (symbiont shuffling), acquiring new microbial strains (symbiont switching), or horizontal gene transfer. Under increasing temperatures, symbionts may increase or decrease in frequency, altering fitness and function of the holobiont (the assemblage of the coral, Symbiodinium, associated bacteria and viruses). Studies have seen these community shifts via increased abundance of certain Symbiodinium clades such as heat-tolerant clade D1 in corals exposed to elevated temperatures (10). However, shifts in a diverse symbiont population can be deleterious to the host and competition between symbiont genotypes can reduce energy needed for translocation to the host (11).