Difference between revisions of "Coxiella"

A Microbial Biorealm page on the Coxiella 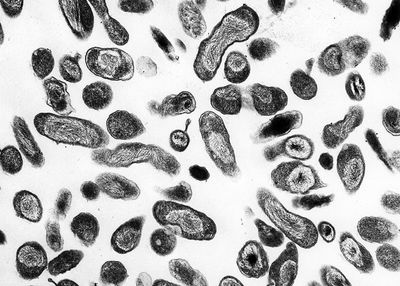 Coxiella is a genus best known for the species Coxiella burnetii, the causative agent of Q fever. Q fever affects numerous mammals, although not in the same way. In humans, this disease has a wide range of severity, depending on the initial health of the host, as well as other factors. Instances in Q fever have dropped dramatically in the United States and other developed nations. This is because animals such as cows and goats harbor Coxiella burnetii in large amounts, providing many opportunities for those working in agriculture to become infected. As the United States and other countries have relied more on industrial technology instead of agrarian technology, chances for exposure have decreased, causing the drop in number of infections. 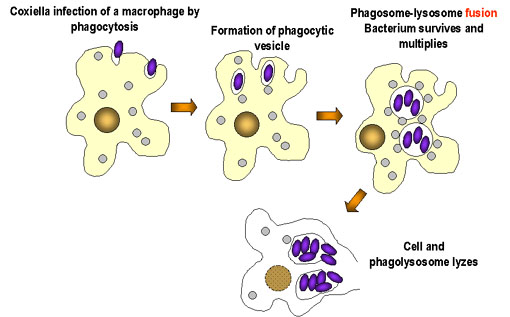 Coxiella are Gram-negative. Cell walls are composed of peptidoglycan. There are two cell types of this genus: large cell variants (LCVs) and small cell variants (SCVs). SCVs are rod-shaped and compact. A distinct features of the LCV is a spore-like particle (SLP), which is an electron-dense, membrane-bound polar body. Coxiella is an acidophilic bacteria, requiring a pH of 4.5-5 to grow. Morpholgically, Coxiella resembles Rickettsia. When it was first disovered, Coxiella burnetii was thought to be a member of this species, and named Rickettsia burnetii.

Coxiella bacteria are obligate organisms, meaning they rely on their hosts for nutritional and environmental support. Sustained viability outside of the host organisms is unlikely.

Coxiella reproduce by binary fission. They are durable organisms, capable of reproduction in the presence of chemicals such as acid hydrolases and defensins, which are bactericidal. It has been suggested that SLPs are released from degenerating LCVs, and that the SLPs are precursors to SCV cells. 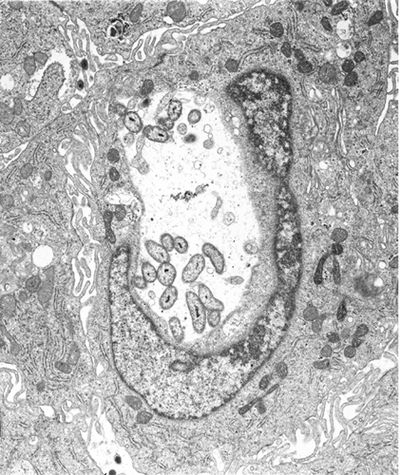 Coxiella burnetii, the most famous species of this genus, causes human Q fever (short for query fever). This disease was first described in 1835 by Edward Derrick, an Australian physician. It is carried by arthropods (particularly ticks), fish, birds, and mammals. C. burnetii appears to only cause disease in humans and laboratory animals such as rats and guinea pigs. However, it can induce abortions in sheep and goats, and causes reproductive problems in cattle. Humans typically contract Q fever by inhaling aerosoles contaminated with C. burnetii. Another source of human infection comes from drinking the milk of infected dairy cows. However, this is not as great of a risk if milk has been pasteurized. Q fever is not always a serious illness in immunocompetent individuals, and in some cases it is asymptomatic. Symptoms of Q fever resemble those of the flu. It can also lead to a mild form of pneumonia if the bacteria was contracted through inhalation. Tetracyclines are the preferred form of treatment for this disease. Q fever is a self-limiting disease that usually resolves itself within two weeks. In some cases, the disease can become chronic; this occurs in about 5% of victims. Chronic infection usually occurs in the heart; 60-70% of chronic infections are found in this organ. Endocarditis is a very common manifestation in chronic cases; there is a mortality rate of 50% associated with this illness. At one point it was suggested that Q fever left patients with an increase risk of ischaemic heart disease. However, the research of McCaughey et. al. (2005) shows otherwise. Another hypothesis was that a Q fever infection left patients with symptoms of chronic fatigue for up to ten years after infection. This was disproven by the research of Thomas et. al. (2004). While Q fever can occur in anybody, immunocompromised individuals are at an elevated risk for infection.

C. burnetii is found all over the world, the exceptions being Antarctica and New Zeland. Although there are high amounts of C. burnetii antibodies in the immune systems of Japanese people, few cases of Q fever have been reported in Japan. It has been hypothesized that Japanese strains of C. burnetii have a low pathogenicity, although this has not been proven. Because only a small dose of the organisms is necessary for infection, C. burnetii has the potential to be a bioterrorism agent.