Cronartium ribicola (Cri) is a fungus that causes a deadly disease, white pine blister rust, in certain species of trees. It is native to China but was introduced to North America in the 1900’s [2]. In North America, C. ribicola infects white pines - specifically, the Western White Pine, Sugar Pine, Limber Pine, and Whitebark Pine [2]. These white pines contribute to ecological stability and serve as a source of timber for the timber industry. For example, the Western White Pine was once the most valuable timber species, but since 1900 it has experienced a 90% mortality rate due to white pine rust [3]. There is no known cure for this disease, making management the only current form of remediation. However, current research attempts to identify mechanisms by which some North American white pines are genetically resistant to C. ribicola.

C.ribicola is comprised of a 94,332,780-bp linear genome, with no chromosomes or plasmids. The genome contains 17,249 open reading frames (ORF’s) [1]. Full genomic information has yet to be characterized for this organism. As part of the WPBR pathosystem, Cri is host to five different mitoviruses (CrMV1 to CrMV5), and is dependent on the stage in the Cri’s 5-stage spore cycle [4]. All 5 mitoviruses share a single ORF encoding a putative RNA-dependent RNA polymerase (RdRp), which is crucial for synthesis of new RNA viruses [4]. Viral RNA production significantly increases in stages where Cri has already infected the host, relative to its other spore stages [4]. Multiple fungal biosynthetic pathways were enhanced during mycelium growth, post-infection [5]. In the urediniospore stage, most genes that are up-regulated appeared to have signaling and transportation functions [5]. In early infection of pine needles, C. ribicola upregulates genes coding for secreted proteins associated with cell wall modifications (potentially masking from plant defenses) [5].

Interesting features of cell structure. Can be combined with “metabolic processes”

Cronartium ribicola is an obligate biotrophic fungal parasite of white pines and belongs to the family of fungi known as rust fungi. Biotrophic parasites obtain nutrients from living host tissue [6]. The success of a biotrophic pathogen relies on its ability to extract nutrients from a host cell without killing it. To extract nutrients from host cells, Cri uses small tube-like structures called haustoria to penetrate the cell wall of host cells and proceed into the cytoplasm without lysing the cell [6]. Once inside a cell, the surface of the haustorium acts as the location of nutrient and information exchange between Cri and the plant cell [7]. There is not exhaustive research on the specific metabolism of Cronartium ribicola, however, similar rust fungi have been observed to primarily uptake D-glucose and D-fructose through their haustoria via a transporter called HXT1p [8]. It is likely that these sugars come from sucrose, which is abundant in plants and is a disaccharide of glucose and fructose. Once inside the haustoria of rust fungi, glucose is used in glycolysis to generate ATP[9]. 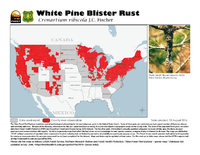 Cronartium ribicola requires two hosts to complete its life cycle, making it a heteroecious and macrocyclic fungus [2]. This fungus infects two host groups: five-needle Pinus spp. and Ribes spp. Environmental factors, such as landscape pattern, differences in light and moisture, and geographic location, impact duration and intensity of infection [2]. Native to Asia, Cri is considered an invasive species in North America. In North America, Cri thrives in cool, moist environments during summer and fall ([10]. Cri is dispersed when spores are released and carried by the wind; these spores have been found to infect hosts at distances farther than 160 km [2].

Cronartium ribicola is an obligate biotroph, relying on the host organism for all nutrients, and normally does not kill its host. Cri has 2 major hosts: the Ribes genus of flowering plants such as the blackcurrant, and many species in the genus Pinus which includes white pine. Ribes are generally not significantly affected by infection [11]. However, five-needle species of the Pinus genus which have not had historical exposure to Cri are particularly susceptible to Cri, where infection can be lethal. The life cycle of Cri depends on infection of both major hosts through five spore stages [11]. A common symptom of Cronartium ribicola infection is the formation of “cankers”- swollen masses of tissue at the branches. In nature, the lethality of Cri has been augmented by various environmental factors and the introduction of invasive pests which can exploit the weakness created by infection [12]. These factors have made Cri highly destructive to native North American pine forests, and as a result the cultivation of Ribes plants has been banned in North America to reduce the amount of potential hosts [13].

In symptom-free pine trees, a single dominant resistance gene, Cr4, was discovered [14]. This is different from the gene, Cr2, that is found in symptomatic white pines. Ongoing trials indicate that species with this gene are resistant to bark reactions and canker development [14]. This genetic resistance is detectable in species that have yet to be invaded by the pathogen, allowing these species to be monitored. To date, species with this genetic resistance have been exposed to white pine blister rust and remain symptom free. Identification of Cr4 allows for easier management of this disease [14]. While monitoring the longevity of the resistant gene, researchers are also given time to create new, long-term management strategies.