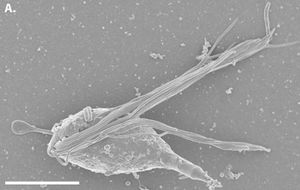 The name Cthulhu is based on a fictional demon from the writings of H.P. Lovecraft. The demon is described to have numerous tentacles protruding from its head. The coordinated beating of the flagella located on the anterior end in C. macrofasciculumque gives it a similar appearance to the head of the monster Cthulhu. Macrofasciculumque refers to the many flagella on this microbe. The name comes from a made-up language and is most often pronounced “ke-thoo-loo.”

Cthulhu macrofasciculumque is a flagellated protist that contains a single anterior nucleus and has a very smooth cell surface, lacking any visible glycocalyx matrix. It is intermediately sized and consists of over 20 flagella, all residing on the anterior end. With this many flagella, it is considered a hypermastigont, meaning it has more than 6 flagella. It ranges in size from 18 – 24 μm in length and 7 – 11.5 μm in width. Cthulhu macrofasciculumque contains a microtubular axostyle complex (a sheet of cross-linked microtubules) that extends the length of the body and protrudes posteriorly.

C. macrofasciculumque lives in the hind gut of the lower termite Prorhinotermes simplex also referred to as the Cuban Subterranean Termite. < i>P. simplex is found in southeastern Florida, western Cuba, Jamaica, and Puerto Rico. The hindgut is anaerobic, and the content is mainly wood from the diet of this termite.

Termites on a lignocellulosis diet depend on their gut protozoa for survival; without them, the termites would not be able to digest the wood substances that they consume. The primary metabolisms occurring in termite gut protozoa are lignocellulosis digestion and nitrogen metabolism. These metabolisms occur in anaerobic environment due to the anaerobic conditions of the termite hind guy. As said by Brune and Stingl, it is hypothesized that parabasalids ferment glycosol units of cellulose in wood to acetate, CO2 and H2 according to the following equation:

The relationship between lower termites and the ﬂagellated protists in their gut is a well-known example of symbiosis. C. macrofasciculumque is a symbiont of P. simplex and is responsible for the efficient degradation of lignocellulosis. There have also been endosymbiotic relationships found in the guts of lower termites between the bacteria and the protozoa. The majority of bacteria found in the termite hindgut are located inside the gut protest and may be a major contributor in the metabolism of lignocellulosis.