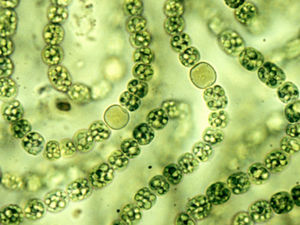 Along with the production of essential and highly demanded oxygen gas and the fixing of carbon dioxide and nitrogen, cyanobacteria also can produce a variety of toxins. These harmful agents come primarily as neurotoxins, cytotoxins, endotoxins, or hapatotoxins. The cyanobacteria produce these toxins to kill off other local species to provide more room for growth. These toxins arise when the environment provides optimal for cyanobacteria to reproduce explosively and exponentially, resulting in algal blooms. These blooms are not only harmful for many aquatic species, but also for humans who ingest contaminated fish and shellfish or swim in or are exposed to contaminated water. It is thought that cyanobacteria are an environmental cause of degenerative neurological diseases such as Amyotrophic Lateral Sclerosis (ALS), Parkinson’s disease, and Alzheimer’s disease.