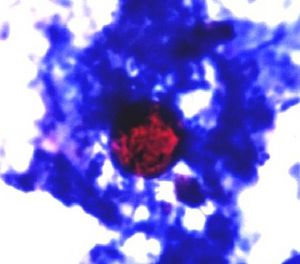 Cyclospora is a unicelluar, coccidian, microscopic parasite which causes cyclosporiasis, an intestinal disease in humans and other vertebrates, such as primates. The most pathogenic in humans, Cyclospora cayetanensis, was first identified in 1979, becoming more prevalent in the mid-1980's. The first instances of the pathogen were located in New Guinea, and since then Cyclospora has mainly been found in tropical and sub-tropical regions. Symptoms, which include watery diarrhea, abdominal cramping, weight loss, and anorexia, usually begin within a week of infection and are displayed for up to a month after the initial infection. Some patients who are infected with the parasite may show no clinical signs. Cyclospora is spread through fecal matter, usually by way of contaminated fruits and vegetables, especially in countries where there are few or relatively lax health regulations. Cyclospora spp. are especially resistant to disinfectants.

When cases of intestinal disease caused by Cyclospora were first being monitored, Cyclospora spp. were incorrectly diagnosed as Eimeria spp. Studies on the parasite's 16S rDNA revealed that the organisms was in fact an emerging pathogen, Cyclospora. Work is currently being done on various projects to learn more about the parasite's genetics.

Life Cycle of Cyclospora. Image from Centers for Disease Control and Prevention.

The life cycle of Cyclospora begins as the host ingests the parasite in its oocyst or spore form. Humans commonly ingest the oocyst through contaminated food or water. The oocyst contains two smaller sporocysts which in turn contain two sporozoites (1 oocyst = 4 sporozoites). In keeping with Apicomplexa's characteristics, the sporozoites demonstrate a membrane-bound nucleus and micronemes. In the host's gut the sporozoites leave the sporocysts and oocyst and penetrate epithelial cells along the host's small intestine. Multiple fission by the sporozoites inside the invaded cells yield meronts, which in turn house merozoites. Merozoites divide to form male (micro-) gametes and female (macro-) gametes and reproduce to form new oocysts. The empty oocysts in the intestinal tract are eventually released with the feces; these are the usual way the disease is identified. Sporolation outside the host environment involves the same processes as internal sporolation. The resulting sporocysts contaminate crops and water and the cycle begins again with the ingestion of the oocysts. The highly resistant oocysts are spherical, approximately 9.0 micrometers in diameter. For excellent images of Cyclospora's developmental stages, see Cyclospora cayetanensis on Kansas State University's Parasitology Laboratory page. 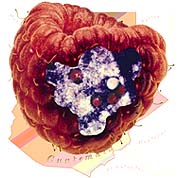 Contaminated Guatemalan raspberry, cause of a United States outbreak of Cyclospora in 1996. Image from Physician's Weekly, September 1996.

Cyclospora is found in warm climates, mainly the tropics and sub-tropics. This parasite infects fruits, vegetables, and water that has been contaminated with unsporolated oocysts from a former host's feces. It is not known whether animals can spread the parasite to people. Like many parasites, Cyclospora can be killed by thorough washing and/or cooking of foodstuffs. In the past symptoms have been obvious in patients who consumed contaminated food in places such as Haiti, Peru, Mexico, Morocco, Pakistan, Indonesia, and very rarely in the United States. Overall the disease is quite rare, and outbreaks are relatively limited. Patients with the disease may take antibiotics to control the symptoms, but if untreated the symptoms may return.