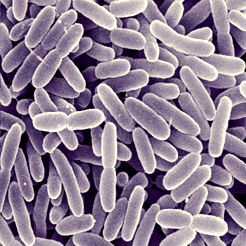 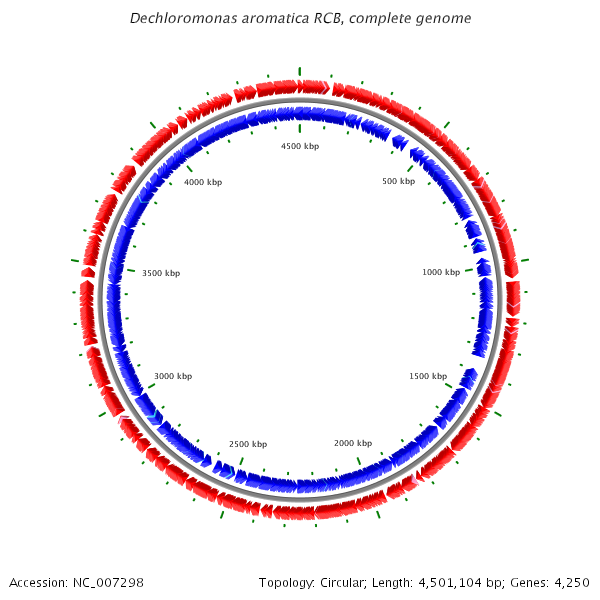 Dechloromonas aromatica is being studied for their ability to biodegrade benzene, perchloate and other compounds. Their unique ability to do so in the absence of oxygen can make them extremely useful if they are deployed to areas where there is contaminated soil or groundwater in bioremediation projects. Researchers have discovered that it has produces a diooxygense for the aerobic oxidation of benzene, but the anerobic pathway is still unclear.(1,2) In research, soil containing radioactive labeled benzene was inoculated with Dechloromonas aromatica and the benzene was quickly oxidized to CO2.(1)

1. This is when Dechloromonas aromatica was first isolated and shown to have the ability of metabolize benzene and perchlorate. The researchers isolated two related strains, RCB and JJ, from two very diverse environments and they both had the ability to oxidize benzene to carbon dioxide in the absence of oxygen using nitrate as the election acceptor. In an experiment, the number of cells in culture was shown to increase with the disappearance of benzene. The researchers believed that this was the first known organism to be able to do this and can be utilized for bioremediation of benzene and perchlorate contaminated sites. Anaerobic benzene oxidation coupled to nitrate reduction in pure culture by two strains of Dechloromonas. John D. Coates, Romy Chakraborty, Joseph G. Lack, Susan M. O'Connor, Kimberly A. Cole, Kelly S. Bender & Laurie A. Achenbach