Deep Sea bacteria live in an extreme environment, where they are well adapted to the physical conditions. At these depths there is high pressure, extreme temperature and absolutely no light. The bacteria found in this environment are usually chemoautotrophs but surprisingly can also be photosynthetic, using the light produced through chemical reactions at hydrothermal vents [1] . These chemoautotrophs typically use sulfur, methane and ferrous iron as energy sources to drive carbon fixation[2] . The deep-sea microbial life is highly specialized to survive in this harsh environment and is unique when compared to other microbial ecosystems [[3] .

Not much is known regarding the deep sea due to its inaccessibility and size [4] . Microbes have adapted to having a longer lifespan, some of which reproduce extremely rarely, around once every 10,000 years [5] . Microbes also exist in low densities compared to other ecosystems [6] , and the deeper scientists collect core samples from the sediment, the more we learn about the diversity [7] . Up until recently, it was believed that Archaea did the majority of carbon fixation [8] . New studies show a growing amount of evidence supporting the idea that bacteria also have a large contribution to carbon fixation in the deep ocean [8]. It is believed that "Deltaproteobacteria", "Gammaproteobacteria" and "Oceanospirillale" are the most common types of bacteria in this ecosystem [8] , however, not much is know about specific bacterial species in any region of the deep sea. Although bacteria may not be as influential as Archaea in deep-sea carbon fixation, there is profound diversity between species.

Temperature in the deep ocean is at extremes, with hot water up to 350 degrees Celsius [9] near hydrothermal vents, and close to freezing in the surrounding water. This broad range creates an ecosystem with distinct characteristics with highly specialized bacterial communities.

Bacteria have various strong relationships with other organisms in the deep ocean, such as their symbiotic relationships between shrimp, clams and tubeworms and other organisms located near hydrothermal vents and cold seeps [10] . Deep-sea chemoautotrophs have a large impact on carbon fixation [2] and are usually forgotten when compared to the commonly known process of phototrophy in the surface regions of the ocean [2] .

The main source of the inorganic carbon in this ecosystem is from hydrothermal vents that contribute various oil and gasses [11] . Hydrothermal vents are caused by movement in tectonic plates, either by separation or subduction, creating regions where water is being percolated[12] . The deep-sea water is taken in at one location, heated by the magma and released with a different chemical composition, often with the appearance of smoke [12] . For the most part, these vents release chemicals that are toxic [13] to many organisms and only those who are highly adapted for this environment can survive.

There are heterotrophs that live near these vents in a mutualistic relationship with bacteria. In the case of the tubeworm, this organism has a specific compartment in which bacteria reside, in the upper region of the trunk called the trophosome[1] , and aids in processing their nutrients. The tubeworms take in inorganic compounds such as sulfur and CO2 through the obturaculum, rich in hemoglobin[14] . Although these nutrients cannot be processed directly by the worm, it can be utilized by the chemoautotrophs. The bacteria benefit by receiving the bioelements that they require, and in return, the microbes fix carbon and release the nutrients, which are beneficial and usable to the tubeworm [11].

Vesicomyid clams can be found in cold seeps as well as hydrothermal vents, relying on endosymbiotic bacteria in their gills to provide them with nutrients [15] . In many ways, cold seeps are very similar to hydrothermal vents, however, cold seeps do not have as extreme of temperatures[1] . Elevated levels of dissolved inorganic carbon and hydrogen sulfide can be found in the sediment and chemoautotrophs use the abundance of inorganic carbon for carbon fixation, creating products that are beneficial to the host organism [16].

The vesicomyid clam relies solely on its bacterial symbionts for its nutritional needs[13] . Vesicomyid clams take in CO2 and O2 via gills, while its foot takes up hydrogen sulfide in the reduced sediment [13] . The bacteria within the host then use the hydrogen sulfide as an energy source to drive carbon fixation [16] . The products of this reaction are beneficial to the clam and can be used for its own nutritional needs[13].

6. Impact on the Global Carbon Cycle

As deep-sea bacteria take up inorganic carbon, they can affect the chemistry of rocks within the sediment. To date, the extent of the impact they have on the global carbon cycle is not fully understood [17] . These organisms are thought to an important role in nutrient cycling in the deep ocean [18] , as they are capable of turning inorganic carbon into organic carbon, thereby making it usable to various organisms [5] . High amounts of carbon fixation occur in the benthic region of the deep sea, however, very little is know about this region and which organisms are key players[4] . It is estimated that 20% of the biomass on the seafloor was produced by carbon fixing bacteria [19] . Based on these findings, it is believed that these organism help sustain deep ocean ecosystems but further research is being undertaken to appreciate the extent of the impact. 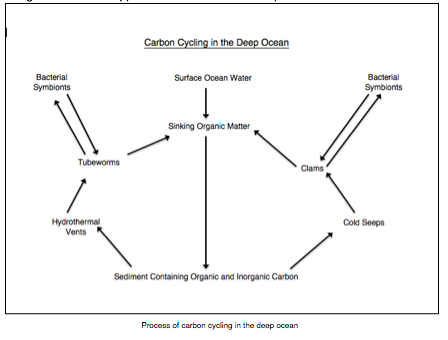 3. Yayanos, A. A. "Evolutional and Ecological Implications of the Properties of Deep-Sea Barophilic Bacteria." Proceedings of the National Academy of Sciences 83.24 (1986): 9542-546. Print.