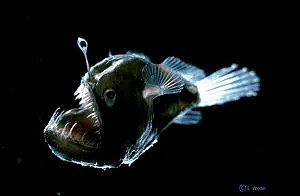 Many species of fish use luminescent bacteria as symbionts as their source of light: shallow water species utilize bacteria better in warm temperature conditions, while deep sea fish bacteria are better accustomed to cold temperatures. Most of these fish have photophores that open into the gut, and their symbionts are extracellular. For example, the flashlight fish uses its light organ as a "flashlight" to help it see in the dark. Deep sea anglerfishes however, have photophores that open to the sea water via pores. Because bacteria perpetually grow, the photophores must be occluded in order to turn off the luminescence. These fish use their hanging bioluminescent appendages as bait to lure prey towards them. Another fish, the deep sea shrimp, can spit bioluminescence to distract a predator for defense. Most fish synthesize their own luciferin, and a few must take it in their diet. Almost all produce a blue light, and some produce both blue and red (12)