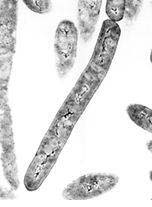 With such a surprising diversity of organisms in such an extreme environment, the deep subsurface has been the subject of many studies in the recent years. Deep subsurface microbes carry out processes that alter the chemical makeup of minerals, degrade pollutants, and alter the mineral content of ground water. Many of them can also break down petroleum substances, which has been utilized in cleaning up oil spills and other accidents of that nature. Studies are being done to search for deep subsurface microbes that produce antibiotics and heat stable enzymes, and for those that assist in the degradation of toxic substances. Due to the massive amount of habitable area, and the surprisingly high density in which these microbes live, it is now believed that subsurface microbes are responsible for over half of the biomass on the planet [2].

Deep subsurface microbes first came into question when the American geologist Edson S. Bastin questioned why samples of water extracted from oil fields contained hydrogen sulfide and bicarbonates. Armed with the knowledge that certain species of bacteria can derive energy from reducing sulfur compounds in the absence of oxygen, he concluded that there must be populations of these bacteria living in the underground oil reserves, degrading the organic components of oil as a carbon source, and reducing sulfur compounds for energy. By 1926, Bastin and his colleague, Frank E. Greer had cultured sulfur reducing bacteria from samples taken from the groundwater of an oil deposit several hundred meters below the surface. Bastin and Greer's initial deduction was that the bacteria were the ancestors of those buried up to 300 million years ago when the organic materials constituting the oil deposit were buried [1].

Perhaps the most incredible thing about the microbes found in the deep subsurface, is that the majority of the populations can thrive indefinitely without any input from the earth's surface[1]. That being said, they are effectively 100% disconnected from the rest of life as we know it.

The deep subsurface ecosystem begins at about 50m below the surface of the earth's crust, and extends variably downward, up to 2.8km (1.7mi)[1]. The organisms live within the flooded pore space within the rocks and live by reducing inorganic compounds found in the rock. Intense pressures, high temperatures, limited liveable space, and limited nutrient availability are all factors that microbes living in this environment must adapt to. It seems that the largest limitation to microbial life in this habitat is temperature, which increases with depth. The highest temperature generally accepted as the livable range for microorganisms in this habitat is 110 degrees C [1] In oceanic crusts, the temperature of the subsurface increases at a rate of about 15 degrees C per kilometer of depth, giving a maximum livable depth of about 7 kilometers. In the continental crusts the rock warms at a significantly faster rate, about 25 degrees C per kilometer, resulting in a maximum livable depth of approximately 4 kilometers [1]. Microbes in these environments can only exist where water fills the pore spaces of rocks. In the marine subsurface, this is rarely an issue, but in continental subsurface, there tends to be a bit more variability in groundwater dispersion.

Hydrothermal waters are generally located at tectonically active regions on the ocean floor. Spreading centers and hot spots bring magma relatively close to the surface, which heats the surrounding sediments and rock layers to extremely high temperatures. Hydrothermal subsurface ecosystems are characterized by extreme heat and the presence of sediments comprising both organic and inorganic compounds. The water located in the pore spaces of these deep hydrothermal systems more closely resembles axial hydrothermal vent fluid than typical seawater [2]. Because of this, the microbes inhabiting these ecosystems are almost exclusively thermophilic archaea, with a few genera of thermophilic bacteria as well [2].

In sedimentary basins and oil reservoirs, it is thought that the microbial communities are remnants from when their ancestors were buried underneath the sediment or organic matter. The nutrients contained within these ecosystems is typically organic matter produced by plants existing at the time when the layers were exposed at the surface. Energy is derived from the reduction of organic compounds in oil or sediments, as well as from inorganic compounds such as sulfur, iron, and manganese [3]. As depth increases, available pore space and nutrient availability decreases, so the metabolic rate of the communities slows down significantly. As the rock becomes increasingly compacted, the colonizable areas become increasingly patchy and isolated, resulting in a plethora of microcommunities surrounding the available sources of nutrients[1].

Igneous rocks are perhaps the most hostile environment in which deep subsurface microbes exist. Due to the processes needed to create igneous rocks, i.e. extreme temperature and pressure, these habitats are effectively sterilized at their creation. Microbes can only colonize the rocks when they have been removed from the hostile surroundings, usually by tectonic processes. Once the rocks cool to below the temperature threshold for microbial life (as far as we know it) the microbes must be transported there by the infiltration of groundwater from above. The groundwater penetrates microscopic fissures and spaces between the crystals and the microbes begin to take hold. 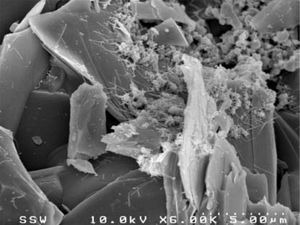 Scanning electron microscope image of bacterial cells attached to muscovite flakes within quartzite. This sample was collected from a depth of 2km in South Africa. (Photo is courtesy of M. Davidson, Princeton University, and G. Southam, University of Western Ontario.) [4

Due to the lack of organic materials in these igneous rocks, the microbial communities are comprised primarily of autotrophs. Their primary source of energy is hydrogen gas, which is produced by reducing iron and sulfur in the presence of oxygen poor water, and gather carbon from carbon dioxide. These microbes, termed "acetogens", excrete organic compounds that can then be utilized by other microbes[1]. These environments are often referred to as "SLiMEs", which stands for subsurface lithoautotrophic microbial ecosystems [1]. These ecosystems can exist indefinitely without any input from the surface.

Microbial communities are surprisingly diverse in the deep subsurface. Communities consist mainly of bacterial and archaeal species that specialize in inorganic substrate oxidation, with iron and sulfur oxidation the two main energy sources. Thermophilic metal oxidizers proliferate throughout the range of deep subsurface microbes [3]. In communities colonizing sedimentary deposits or oil reservoirs, anaerobic heterotrophs utilize the abundant organic matter deposited when the formation was created. Microbes exist in a vast range of densities in these ecosystems, from a single cell permanently isolated from all other life, up to 100 million individuals per gram of rock [1]. Densities are a limited by substrate availability and pore space, which sometimes can be so small that only a single cell may fill the void at any given time. The life cycles of these microbes is impressively slow, with cell division occurring up to once per decade, or even once per century [1]. This is in stark contrast to surface microbes, which typically reproduce in a matter of minutes, or months at most.

Lithotrophs obtain energy from the oxidation of soluble inorganic compounds. These organisms are considered primary producers and constitute the largest portion of biomass in the deep subsurface biosphere.

Thermophiles are microbes that have adapted to living in extremely hot environments. These environments occur deep in the rocks near the magma layer, or within the hydrothermal waters deep under the ocean floor. As far as we know, the hottest temperatures in which the most extreme thermophiles can sustain life is around 110 degrees C [1].

Most species inhabiting these depths have evolved the ability to reduce inorganic compounds contained within the rocks. These organisms typically use the inorganic compounds, such as iron and sulfur (ex. Desulfotomaculum, Thermodesulforhabdus, and Desulfacinum [3]), in conjunction with water to produce the hydrogen gas from which they get their energy. Some microbes (ex. Thermincola ferriacetica) have evolved the ability to survive with molecular hydrogen as the only energy substrate, iron compounds as terminal electron acceptors, and carbon dioxide as a carbon source [3]. There are some heterotrophic species that exist in these ecosystems as well. They feed on the organic waste products produced by the lithoautotrophs, as well as dead cells. Some can degrade petroleum substances heterotrophically and have been found to be quite useful because of it.

Microorganisms living under these conditions have developed an extraordinary ability to limit their metabolism to a level that is best measured in geologic time. Most have the ability to remain viable at minuscule to negligible metabolic cost [1]. It is because of this that the lines between life and death begin to blur. Some microbes remain metabolically dormant for such extended periods of time, that is impossible to tell whether a cell is dead or just dormant. Many individuals tend to lose the ability to reproduce after significant periods of dormancy as well [1]. It is because of these two facts that the classification of "living" or "dead" becomes a relative term when referring to deep subsurface microbes.

As the microbes in this ecosystem use up their water reserves and have no way of replenishing, they will shrink their body size to under 1/1000 of the original volume. These dwarfed microbes are effectively termed "ultramicro-bacteria". Periods of dormancy may persist seemingly indefinitely in these stages [1].

Due to the long lifetimes of these organisms, coupled with periods of extreme stress and possibly radiation, DNA damage is rampant. There is considerable strain on DNA repair mechanisms to keep up with the damages provided by the environment. Over millenia, this pressure has selected for those individuals with exceptionally effective and efficient DNA repair mechanisms [5].

Microbes use reduced inorganic substances, such as iron, sulfur, or magnesium from which to derive the chemical energy necessary to conduct biosynthesis. 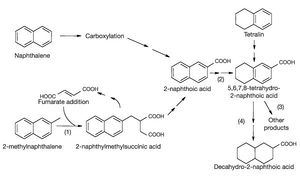 Metabolic activity in areas rich in hydrocarbon substances support large numbers of anaerobic heterotrophic microorganisms. These microbes metabolize the hydrocarbons as both an energy source as well as for a carbon source. These organisms have special relevance in today's day and age, as petroleum products become increasingly more and more prevalent. These organisms facilitate the breakdown of these substances, and have been used to clean up oil spills and to help degrade other petroleum distillates [4].

DEBI is focused on bringing together scientists from diverse fields such as microbiology, biogeochemistry, and observatory science to try and create and expand ways to study and conceptualize life as we know it. DEBI is designated as a research coordination network, which, as an organization will provide opportunities and plan expeditions to study deep subsurface life [4]. 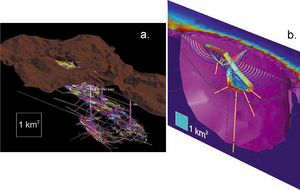 a.)This diagram shows the mine shaft that the DEBI project is set to be constructed within.(Image courtesy of Dr. Z. Hladysz of SDSMT.) b.) The yellow lines in this image show potential coring opportunities for future microbiology experiments. The purple shaded area denotes the area of the ground that has contributed to groundwater seepage into the mine. [4

This facility takes advantage of the largest and deepest underground mine in the United States. Located in the Black Hills of South Dakota, this old gold mine will provide microbiologists with a drilling platform from which to study deep subsurface microbiology. Though the facility is mainly being developed for the study of quantum physics, it will serve as a station to study the ecological habits and interactions of deep subsurface microbes [4].

Almost all knowledge gained about deep subsurface microbiology has been gained through the cooperation of biologists and unrelated drilling operations. By "piggybacking" on exploratory drilling operations, biologists have been able to test otherwise inaccessible areas. The IODP is a cooperative program that aims to continue to give biologists and other scientists alike the ability to incorporate scientific study of deep subsurface microbes with current unrelated drilling plans [4].

Edited by Craig Mack, a student of Angela Kent at the University of Illinois at Urbana-Champaign.