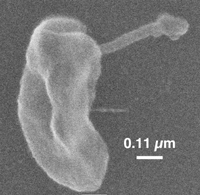 Figure 1: Dehalococcoides species cellular Image from (4). Of note is the characteristic indentation on the side of the disc, and the filamentous extension. Dehalococcoides can bind to solid features in a separatory column (3) and the filamentous extension has been hypothesized to be responsible for the binding (10). The cell wall has also been observed to have an odd structure that resembles the S-layer of Archaea (11). There was no visible peptidoglycan layer (10).

Dehalococcoides mccartyi (D. mccartyi) are specialist “strict organohalide respiring bacteria,” and are restricted to its reductive dehalogenation activity with its use of chlorinated and brominated compounds as their terminal electron acceptor and are dependent on hydrogen as an electron donor (10). This species of bacteria does not utilize fermentation, or any other known energy metabolism mechanisms. D. mccartyi are anaerobes (2).

D. mccartyi are non-motile, disc-shaped bacteria, ranging in size from 0.3 to 1 µm in diameter and 0.1 to 0.2 µm in thickness (10). The two flat sides of the disc have distinguishing indentations as can be seen in Figure 1. The cells have roughly 30 times lower cell volume than E. coli (10). Research to further investigate cell wall structure and other structural features has been limited by the current restriction on obtaining large biomass yields of cells (10). 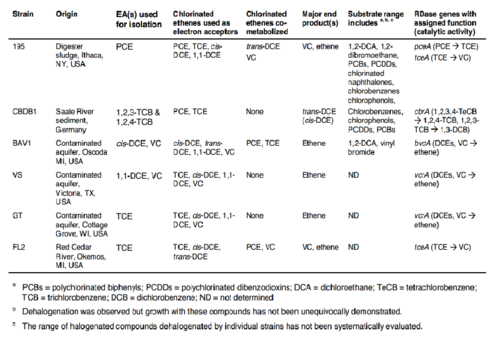 Table 1: the presentation of different isolated strains with listed substrate ranges, significant final products, available chlorinated compounds that could be metabolized (not necessarily used for energy), and suspected genes utilized in the dechlorination process (10). VC is vinyl chloride, and DCE is dichloroethene.

Oxygen levels over 4 mg/mL can permanently inhibit the vinyl chloride degradation step catalyzed by enzyme 4 in Figure 2 (2). It is of note that in some strains of Dehalococcoides the oxygen inhibition was reversible, though this was a subset of the genus (2). The trichloroethene degradation to vinyl chloride was not inhibited by oxygen (2), which could lead to vinyl chloride accumulation and may cause concerning health and environmental side effects, as described earlier. Various Dehalococcoides strains are described in Table 1 with some dehalogenase activities listed.

An interesting biotechnology application could arise if D. mccartyi growth was optimized and if it was cultured with oxygen inhibition to produce vinyl chloride. The vinyl chloride generated, with further development, could possibly be used to produce the third highest produced plastic, polyvinyl chloride (19).

Some believe that Dehalococcoides are the most important microbial processors for generating ethene (9). Harnessing ethene production from a dry-cleaning waste product such as PCE may be beneficial in industrial settings to reduce costs involved in paying for PCE disposal and also be useful in generating an ethene product in the process. Ethene is commonly known for its use in producing plastics through polymerizing it to produce polyethylene, or polyethene.

Through gene sequencing it has been found that D. mccartyi lack the traditional genes for sulfate, nitrate, and fumarate reduction (10). This lends evidence to this bacteria being a strict organohalide respiring organism. Other genes identified to be missing were genes responsible for motility, peptidoglycan synthesis, and sporulation (10). These features are part of the identifying mechanisms used for the bacteria. It has been proposed that D. mccartyi evolved its dechlorinating ability through a horizontal gene transfer event (18).

D. mccartyi species have been isolated from contaminated environments of “digester sludge, sediments, and aquifers” (10). It was noted that one strain was isolated from a river with no reported halogen contamination (10). This shows that the organism may not require a man-made ecological niche. It is more likely that the bacteria was previously evolved to exploit the occurrence of naturally formed halogenated compounds in the environment and this population increased with the occurrence of increased human use of PCE (3). A possible organism able to produce various organochlorinated compounds for use as a terminal electron acceptor are a variety of common fungi, though the direct interaction with Dehalococcoides has yet to be determined (7). Fungi, lichen, and bacteria are able to produce chlorinated compounds for use as an antibacterial substance (1) and any of these may be a source of PCE that permitted Dehalococcoides growth before humans altered the environment. This supports the idea that a naturally formed environment may have already been present for D. mccartyi to exploit, and only recently, due to human activity, had widespread tetrachlorine contaminated habitats increased, permitting Dehalococcoides population growth.

Dehalococcoides mccartyi growth can occur in a controlled medium supplemented with haloorganic compounds including chlorine and bromine to act as the terminal electron acceptor (10). Acetate was provided as a carbon source, hydrogen as an electron source, and vitamin B12 was necessary for growth (10). It was possible to increase the doubling time from 3 days to 0.8 days through the addition of enrichment cultures previously designed for other Dehalococcoides, though the specific components involved in permitting this growth have not yet been defined (10). Optimum growth conditions occurred from pH 6.5-8.0 and between 25-35oC, with permitted growth as low as 15oC (10).