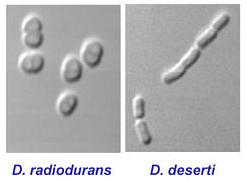 Deinococcus deserti VCD115 was recently isolated from mixed surface sand samples from the Sahara desert [3] . The Sahara desert is an extreme environment, where any surviving organisms would’ve had to adapt to harsh conditions of UV irradiation, cycles of high and low temperature, desiccation and nutrient limitation [3] . These sand samples from which D. deserti were isolated were also “enriched” for radiation tolerance with exposure to 15kGy gamma-radiation [3] . Based on 16S rRNA gene sequence and DNA-DNA hybridization, the novel strain D. deserti VCD 115 was shown to belong to the genus Deinococcus [3] . Like the other members of the genus Deinococcus, D. deserti are non-pathogenic and non-motile [5] .