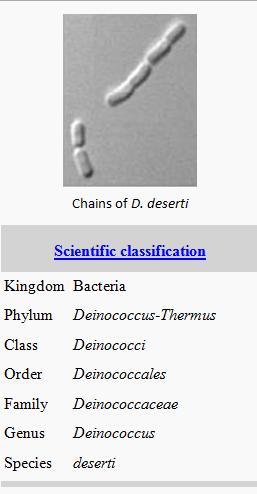 According to NCBI, as of November 23, 2012, there are 46 characterized species of Deinococcus.

Deinococcus deserti was recently isolated from mixed surface sand samples from the Sahara desert [3] . The Sahara desert is an extreme environment, where any surviving organisms would’ve had to adapt to harsh conditions of UV irradiation, cycles of high and low temperature, desiccation and nutrient limitation [3] . These sand samples from which D. deserti were isolated were also “enriched” for radiation tolerance with exposure to 15kGy gamma-radiation [3] . Based on 16S rRNA gene sequence and DNA-DNA hybridization, the novel strain D. deserti was shown to belong to the genus Deinococcus [3] . Like the other members of the genus Deinococcus, D. deserti are non-pathogenic and non-motile [5] .

Deinococcus deserti grow as whitish, circular, uniform-edged colonies of 0.5-1mm when grown on trypticase soy broth (TSB) ten-fold diluted for 72 h at 30˚C [6] . The other Deinococcus type strains usually grow as pink or red colonies on TSB rich media plates, but D. deserti showed no growth on rich media [6] . Growth was also observed at 37˚C, slow growth at 23˚C, and no growth at 45˚C [3] . Growth occurred between pH of 6-9, with optimal pH being 7.5 [3] . A generation time of 3 h is observed [6] . Similar to many Deinococcus spp., D. deserti are strictly aerobic, protease and catalase positive [6] .