The genome of D. radiodurans consists of four major parts. The complete sequence of the R1 strain has 3,284,156 base pairs made up of two circular chromosomes (2,648,638 and 412,348 base pairs), a major plasmid (177,466 base pairs), and a small plasmid (45,704 base pairs). No current research shows whether or not these plasmids contribute specifically to functionality or virulence. However, it is known that multiple copies of each gene are found on all the chromosomes and plasmids, which most likely contributes to its amazing repair capabilities associated with its radiation resistance.[1] 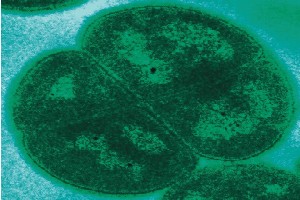 D. radiodurans is a gram-positive bacteria that usually forms in spherical pairs or tetrads.[4] The most interesting aspect about the cell structure of D. radiodurans is that it keeps 4-10 copies of all its genes at any given time depending on its current stage of growth. Many researchers believe this relates to the reason why it can withstand so much radiation. This ability does not rely on some "magic" gene that protects it from radiation, rather, it seems that D. radiodurans is able to more efficiently repair double strand breaks in its DNA that result from radiation damage thanks to these extra copies and a few other special proteins.[2]

Perhaps the most interesting current research taking place concerns whether or not it is possible to genetically make other bacteria as radiation resistant as D. radiodurans. One such research team in China is debating this topic. Specifically, they are trying to insert an expressive recombinant Mn-SOD protein from D. radiodurans into E.coli BL21. The real challenge here isn't trying to insert random proteins into other species, but is making the protein expressive and recombinant, essentially self-sustaining in the new species. So far this research has not been completely successful, however it has as the team put it "provided the foundations for further studies and applications of the recombinant Mn-SOD."[6]