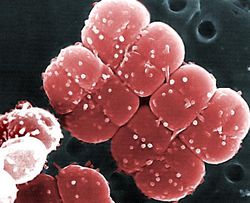 Deinococcus radiodurans is a spherical bacteria 1-2 μm in diameter that tends to form tetrads and is well known for being extremely resistant to radiation (3). It is red in color and non-motile as well as nonsporulating, as shown in figure 1 (4). It is found in many places worldwide, from soil, elephant dung, and granite in Antarticas dry valleys (5). It was first isolated in 1956 when canned meat was found spoiled even though it had been exposed to radiation (3).


D. radiodurans has been of fascination to researchers who are eager to understand its amazing DNA repair mechanisms. It also has been useful as a genetically engineered bacteria. It has been recombined to be capable of metabolizing toxic toluene and mercury from radioactive waste, as it can survive in the most extreme radioactive conditions (5). 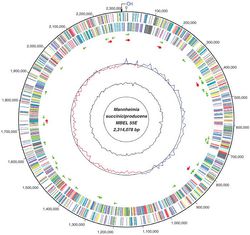 The genome of this bacteria is composed of four circular molecules:

The genome contains 3187 open reading frames (ORFs), with an average size of 937 base pairs (bp), representing 91% of the genome. Analysis of the genome shows that almost 30% of the total number of genes encode proteins with regulatory functions (39 of 140) including: transcription factors, response regulators, and kinases are found on chromosome II and the megaplasmid.(6)

D. radiodurans is an obligate gram positive aerobe that is chemoorganotrophic. (7) This bacterium however has been recombined in order for it to be able to metabolize various radioactive toxic waste, such as toluene and mercury. It is cocci shape bacterium that stains gram positive although it’s cell structure more closely resembles that of a gram negative cell. It has an outer and an inner membrane and a thicker peptidoglycan layer that is 14-20nm thick. On top of the peptidoglycan layer there is another layer that is broken up into many small compartments. (3)

D.radiodurans can be found in a wide variety of habitats. However a lot of them are dependent on water which limits the areas in which they can be found. They are widely distributed in the soil and can be found in every continent. It has also colonized ground meat and sewage. Many colonies have been isolated from many different settings including radiation sterilized surgical tools, filtered air, and elephant waste (8).Their ability to withstand extreme environment also makes it easy for them to live in almost every habitant on the planet. They are also able to survive in nutrient poor environments and dry places since they have also been isolated from dried food, musical instruments, and room dust (7). 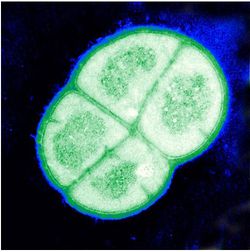 The famous saying “What doesn’t kill you makes you stronger” by Frederich Nietzsche might apply to our bacteria. Many researchers are taking advantage of the fact that Dienococcus radiophilus is not found to be pathogenic to humans and are trying to use its radiation characteristics, as shown in figure 4, for the benefit of our species. Some examples of the ongoing research will be summarized below.

D. radiodurans: Getting a Better Fix on DNA Repair by Robert Longtin focuses on the role of D. radiodurans in the treatment of cancer. The article describes the research being done to use the bacterial DNA repair system in helping to fix DNA damage present on cancer cells because D. radiodurans has been found to have a DNA repair mechanism that can fix up to 250 times more DNA breaks than E.Coli can fix(10). While this seems very promising, no in vivo research has been performed yet and some researchers claim that the bacteria might not be as useful as the theory suggests because “the most meaningful biologic information is not DNA structure, it is protein structure”(10). The article also concludes by putting an emphasis on the lack of funding from the National Institute of Health compared to other agencies such as the Department of Energy, NASA, the National Science Foundation, and the Department of Defense which all have interest in using the bacteria for different purposes such as its potential to absorb and degrade toxic matter in high-radiation environments.(10). 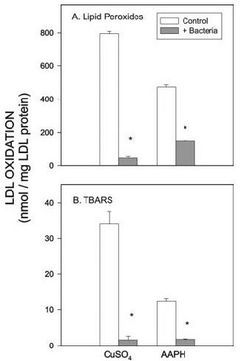 Figure 5: Study Results
The effect of bacteria Dienococcus radiphilus lipid extract on LDL oxidation induced by copper ion (A) or the free radical generator AAPH (B) (12).

In an experiment by Xiaosong Chang et al., Involvment of recF in 254 nm, Ultraviolet Radiation Resistance in Deinococcus radiodurans and Escherichia coli it was shown that rec F is a crucial gene to the RecFOR pathway. The RecFOR pathway is essential to the repair of single stranded gaps after DNA damage involving several Rec proteins. This experiment manipulated recF individually to gain an understanding of its significance in Deinococcus radiodurans UV resistance, so a recF mutant of D. radiodurans was constructed. The researchers were also interested in if UV resistance could be increased in E. coli if D. radiodurans recF was transformed into E. coli BL21. Deinococcus radiodurans, RecF mutant strain, E. coli-recF, and E. coli were cultured and then were exposed to UV-C irradiation treatment at 254nm. At 2 hour time intervals a sample was taken that was plated and incubated from which survival analysis was conducted (11).

A statistically significant difference was observed between RecF mutant and D. radiodurans recF , as the RecF mutant had a lesser coping ability to UV radiation. The E. coli-recF showed a 2.5 fold increase in survival to UV radiation compared to the non-recombinant E.coli. This shows that recF has an important role in UV resistance and D. radiodurans recF is more UV resistant that that of E.coli recF (11).

A sister specie in the same genus called Dienococcus radiophilus is also studied for its benefits in cardiovascular disease. The antioxidative effect of the bacteria D. radiophilus against LDL lipid peroxidation by A. Lavy, Y. Neeman, and B. Fuhrman was a paper describing the research done to explore the benefit of Dienococcus radiophilus in reducing the development of atherosclerosis. The atherosclerosis plaque formation is a process by which macrophages get deposited in blood vessels and starts accumulating low density lipoprotein (LDL), or what is known as “bad cholesterol”, until a complete atherosclerosis plaque is formed(12). The prevention of the formation of these plaques is important because if the plaque occludes the blood vessel or bursts it could lead to some serious cardiovascular problems leading to death in many cases. Lavy et al investigated the use of D. radiophilus in inhibiting the oxidative modification of LDL and therefore reducing atherosclerosis plaque formation. Thiobarbituric acid reactive substances (TBARS) and of lipid peroxides were used to measure LDL oxidation in control samples versus samples with bacterial extracts when induced by copper ions and the free radical generator AAPH. As shown in figure 5, the bacterial extract showed significant decrease in LDL oxidation. This suggest that D. radiophilus could have a role is decreasing the formation of atherosclerosis plaques. Since this was an in vitro study, further studies needs to be done to confirm this benefit an equivalent in vivo benefit (12). 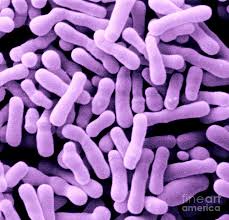 D. radiodurans is known as the world’s strongest bacteria. It is capable of surviving in high radiation. “The bacterium D. radiodurans, the present gold-medalist of radiation resistance, is widely considered an extremophile par excellence” (13). Many scientists have been studying their ability to survive in condition such as “5 megarads of γ-irradiation and up to 1,000 J of UV irradiation/m2 without mutation” (14). The results that were found are that they are able to survive in such conditions due to two genes that were found: sig1 and sig2. These two genes are mutants and a D. radiodurans bacterium that contains the sig 1 gene is capable of living in even more severe environments. Since it can survive in such harsh environments it has become a good candidate for radioactive waste cleanup. They have been use for the complete degradation of toluene in sites where there is contamination (15). Not only that they are able to repair their damage in only an hour which is a short amount of time. Unlike most other bacteria that have only one DNA it has four to ten DNA. According to data this specific bacteria is known as one of the oldest life forms on earth originating about 2 billion years ago. One of the theories that scientists have is that it is originally from outer of space but this was prove to be wrong.