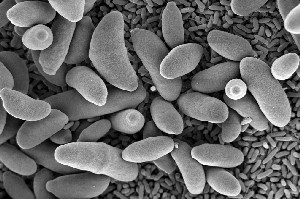 Desulfotalea psychrophila is a gram-negative sulfate-reducing proteobacterium that is rodular in shape. It is a delta-proteobacterium marine organism which can be found in marine sediments that are permanently cold. This organism was first discovered in arctic marine sediment off the coast of Svalbard. Desulfotalea psychrophila can withstand extremely cold temperatures and can even survive in waters below 0°C.

The organism does not form spores, and has a respiratory and a fermentative type of metabolism. Desulfotalea psychrophila is chemoorganotrophic, but has very little in common with other sulfate-reducing bacteria. The bacterium is strictly anaerobic, meaning it does not require oxygen to function. A electron-micrograph photo taken of the bacteria with an electron microscope reveals that D. psychrophila is rod-shaped in appearance, and some cells are sligtly curved. The organism breaks down sulfur as suggested by its name.

D. psychrophila is believed to play an important role in energy cycles, as it is an abundant member of the microbial community. The bacterium plays an important role in energy cycles by contributing to global carbon and sulfur cycles. The organism functions at an increased rate in colder waters, which could mean the species may be threatened by the rising temperatures of water as global warming is becoming more prevalent. 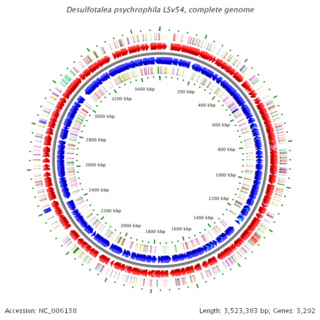 The genome of Desulfotalea psychrophila strain LSv54 is one circular chromosome 3.523 million base pairs in length. The chromosome consists of two plasmids, 121 586 bp and 14 663 bp in length, along with 3118 predicted genes. D. psychrophila's genome was the first sequenced of any psychrophillic bacterium in 2004. Genome sequencing shows that Desulfotalea psychrophila is unique in that the microbe lacks homologues of several c-type cytochromes that are present in most sulfate-reducing lineages of the delta-proteobacteria.

Desulfotalea psychrophila has one polar flagella surrounded by a double membrane. The cells are large rods and vary in length, usually between 0.6 and 0.7 micrometers. The bacteria are chemoorganotrophs. Desulfotalea psychrophila has a respiratory and fermentative type of metabolism. The organism uses carboxylic acids, formate, alcohols, and amino acids as both carbon sources and electron donors. Sulfate, sulfite, thiosulfate , and ferric citrate are terminal electron acceptors and D. psychrophila reduces these to sulfide and ferrous citrate. Acetate is produced because of incomplete oxidation. Energy is obtained most effectively at temperatures between 10.0 and 18.0°C, however, the anaerobe is still able to grow in saltwater at temperatures as low as -1.8°C. The bacteria do not require vitamins for growth. The organism requires sodium chloride (10 g/L) and magnesium chloride for optimal growth.

The species has biogeochemical significance in that it plays roles in the carbon and sulfur biogeochemical cycles. The bacteria may have contributions to the environment because the organism could be a major player in the prevention of global warming.