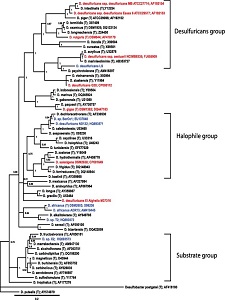 Sulfate reducers thrive in marine systems, owing to the high concentration of sulfate ions in seawater. They can be found in various environments such as oil field production waters, acid mine drainage waters, sewage, and soil. However the genetic structures of the sulfate-reducing bacteria differ in different environments (Verstreken et. al., 2012). This proves that Desulfovibrio desulfuricans has an excellent ability to adapt to its surroundings while maintaining an optimal cell structure for nutrient uptake and allows for the anaerobic production of methylmercury. D. desulfuricans are not known to be pathogenic, however an infection of this microbe into the human body can prove to be detrimental to one’s health. We see an example of this in the case of a 69 year old woman who had been hospitalized with complaints of stomach irritation, irregular bowel movements, diarrhea, and fever. The final diagnoses being D. desulfuricans bacteremia occurring in an immunocompromised host with CMV colitis (Voorduow et. al., 1995). Doctors then incubated the strain revealing a resistance to piperacillin-tazobactam. Desulfovibrio desulfuricans culture under anoxic conditions is more likely to form colonies in free living cells than particle associated environments (Voorduow et. al., 1995).