Difference between revisions of "Didinium"

A Microbial Biorealm page on the genus Didinium 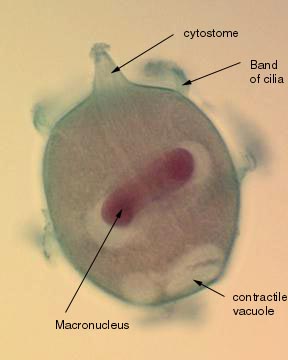 Didinium are members of the phylum Ciliophora. It shares many of the common characterstics of other ciliates, such as having two nuclei and being a model organism. However, this is a unique organism as well. Didinium are most famous for their predator-prey relationship with Paramecium, described below.

Didinium is one of the Ciliophora with a unique genetic structure. In these organisms, the traditional stop codons UGA and UAG code for other chemicals. UAA is used as a stop codon, but there is no in-frame UGA or UAG. 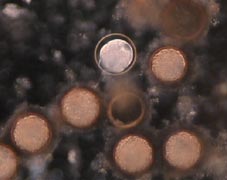 Didinium have about 3,000 cilia. These cilia are arranged in bands around the body. One is located around the middle, and the other at the front. The front ends in a pointed snout (cytosome). Didinium are unicellular and have an oval shape.

Didinium are heterotrophic organisms. They only have one type of prey; the much larger cilate Paramecium. When a Didinium finds a Paramecium, it ejects poison darts (trichocysts) and attachment lines. The Didinium then proceeds to engulf its prey. Although Paramecium are large, Didinium are voracious eaters and will be ready to hunt for another meal after only a few hours. If Paramecium become depleted, the Didinium encyst themselves until its food source becomes replenished.

Didinium, like all members of Ciliophora, can reproduce sexually or asexually. Nucleoli degranulate before binary fission; the bands are dispersed throughout the macronucleus. These bands are segregated during division, but then re-form granular parts. The nucleoli are separated into granular and fibrillar parts during conjugation. The fibrillar parts are usually eliminated.

Didinium are commonly found in freshwater, particularly still water. However, the species Didinium gargantua exists primarily in marine environments; it was first recorded in the Arctic Sea in 1910.

Like other members of Ciliophora, Didinium are model organisms. The relationship between Didinium and Paramecium is regularly used as a model for research in predator-prey relationships as well as biodiversity studies.