Samples of this organism have been extracted from petroleum contaminated soil characterized in acidic sandy loam Cambisol soil in a protected habitat in Rio de Janeiro state, Brazil as well as the perianal swab from a patient with a bone marrow transplant (Yassin, 2006; von der Weid, 2006). Multiple strains of Dietzia have been found in soil, deep sea sediment, and soda lakes (Gerday & Glansdorff, 2007).Dietzia cinnamea is rod shaped in the medical swab while the P4 strain from the soil samples produces a coccoid shape. The organism is approximately 1.4 micrometers long, forms smooth, yellow to orange colonies on agar plates once isolated and is single or arranges in small connected colonies (Von der Weid, 2006). It is gram positive and has a high G+C content, meaning a high number of Guanine and Cytosine linkages in its DNA(Von der Weid, 2006). It displays snapping division, which is the arrangement of cells in a palisade or angular manor after binary fission (Prescott, 2002). This is a characteristic of the genera Arthrobacter and Corynebacterium.

D.cinnamea is an aerobic organotroph. It’s optimal growth temperature is between 22-45⁰ C and extracts carbon from acetate, D-glucose, maltose, and 1,2-propanediol (Yassin, 2006). Capable of growing between pH 6 to 10 and is slightly halotolerant effectively growing in 10% NaCl concentration. 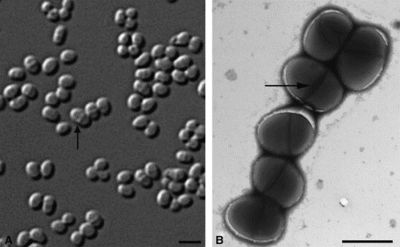 This page was created by Jennifer Jury and Elizabeth ___, students of Prof. Jay Lennon's Microbial Ecology Class at MSU.