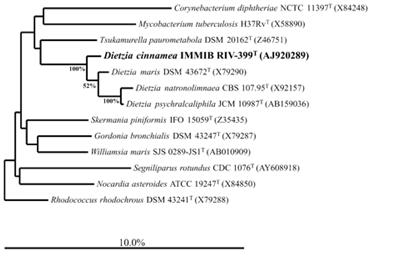 The full DNA code for D.cinnamea has been partially sequenced and contains 3,555,295 bp (NCBI Nucleotide):[1]. D.cinnamea has a GC content of 72.3% (Von der Weid, 2006). DNA of the P4 strain was sequenced with a 16S rDNA and it was found to have a 99.8% similarity to D.cinnamea that was found in the previous bone marrow transplant swab. When testing DNA-DNA similarities, the strains were 93.3% homologous with the transplant swab. A 70% threshold of DNA-DNA similarity is required to include it in the species. This confirms that P4 is part of the species D.cinnamea. This species has a 30-50% genome similarity with the other species of Dietzia (D.maris 52.4%, D.natronolimnaea' 56.3%, D.psychraicliphila 37.8%)(Figure 2)(Von der Weid, 2006).