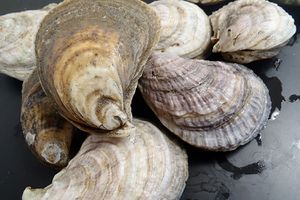 Gills: The gills of the Eastern oyster are of a plicate, heterorhabdic pseudolamellibranch construction.[3] This means that the gills are lined with cilia that are capable of both selecting and rejecting particles for absorption. This selection process works in tandem with the palps and is based on particle size. Cilia in the gill filaments move water through the gills.[3] As the water passes through the entrance of the interfilament spaces it is filtered by lateral cilia that contain mucocytes.[3] These mucus-coated cilia trap particles from the water that are then transported either to a mucus string near the palps or through plical troughs into the dorsal ciliated grooves.[3]