Difference between revisions of "Dinoflagellata"

A Microbial Biorealm page on the Dinoflagellata 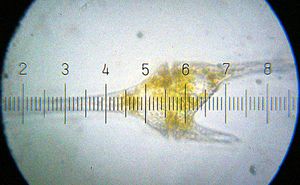 There are roughly 2,000 known species of Dinoflagellata. They are unique organisms because although they are usually treated as plants, dinoflagellates assume some animal characteristics, such as preying on smaller organisms for food.

There is not yet an extensive body of research on most dinoflagellate species.

Because they are photosynthetic, dinoflagellates contain chloroplasts. Most species have two flagella, which are shed if the organism forms a cyst. Dinoflagellates contain cholorophyll a and chlorophyll c2. Dinoflagellata have two forms: armored (with thecal plates) and naked. Some species are bioluminescent, meaning that they can produce their own light, similar to fireflies. During periods of environmental stress, dinoflagellates form cysts. The most common dinoflagellate fossils are those in cyst form. However, some of the species have cyst cell walls made of cellulose, which does not fossilize. Those that do fossilize typically have walls made of a material similar to sporopollenin.

There are three types of dinoflagellate cysts: resting, temporary, and vegetative. Resting cysts result from sexual fusion, and are termed hypnozygotes. Dinoflagellates appearing as resting cysts are dormant. The temporary cyst is formed under adverse conditions. The cyst will split and new flagella will form when the environment improves. Unlike resting or temporary cysts, vegetative cysts are metabolically active. They may also be reproductively active. In some dinoflagellates, such as Blastodinium and Symbiodinium species, the vegetative cyst is the principal life cycle stage.

Most dinoflagellate species are at least partially photosynthetic. Some heterotrophic species are parasitic, obtaining nutrients through a host.

One type of life cycle is the haplontic stage, which contains vegetative haploid cells. This cell reproduces asexually. In this cycle, the only diploid cell is the zygote. There is also a diplontic life cycle, with vegetative diploid cells and sexual reproduction. Only the gametes are haploid. Finally, there is a diplohaplontic cycle, which alternates between diploid and haploid (sexual and asexual) generations. The haplontic stage is the most common, but there are exceptions, and all three can be found within this phylum. The more complex life cycles occur among parasitic or symbiotic species. It is common during asexual reproduction for the parent cell to shed part or all of its cell wall.