Dissimilatory metal reduction is a process that is utilized by microbes to conserve energy through oxidizing organic or inorganic electron donors and reducing a metal or metalloid. Microbial metal reduction enables organisms to create electrochemical gradients, which provides the chemical energy required for growth. Metal reducing microorganisms are becoming a research focus due to their potential to facilitate bioremediation in areas that are contaminated with heavy metals or radionuclides. Furthermore, these organisms are integral for the development of microbial fuel cell. The mechanisms of dissimilatory metal reduction are significant in order to exploit its detoxifying and electric-generating advantage.

Fe(III) reductions occur most often in soils, sediments and the subsurface[9]. The availability of soluble Fe(III) is limited in soil and sediments because the pH is above pH 4; the predominant form is low-solubility Fe(III) (hydr)oxide[9]. In order to access this insoluble solid-phase of iron, iron-respiring microorganisms utilize soluble electron shuttles and Fe(III)-chelating compound, and direct electron transfer via outer membrane enzyme, nanowires, or pili[3]. 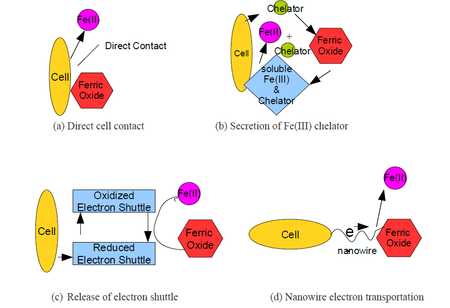 The location of iron-respiring microbes in a three-dimensional biofilm has an impact on which Fe(III)-acquiring mechanism the microbes are going to engage in. Microbes, that are closer to the mineral surface, preferentially use extracellular membrane-bound enzyme to transfer electrons[9]. Alternatively, microbes that are embedded in between the matrix, are more likely to transfer electrons through shuttles or nanowires[9].

There are a number of microorganisms that are able to reduce Fe(III), for instance, Geobacter metallireducens and Shewanella putrefaciens[6].

Among the Geobacter family, the TCA cycle leads to complete oxidation of acetates or other electron donors and ATP is generated primarily through oxidative phosphorylation[5] . To transfer electrons to Fe(III), Geobacter metallireducens possesses a membrane-bound Fe(III)-reductase. It also produces soluble form and membrane-bound c-type cytochromes[6]. Another way to transfer electron to Fe(III) is extracellular transport of electrons to Fe(III) through microbial nanowires[8]. According to a knock-out mutation experiment of Geobacter sulfurreducens, the results indicate that mutants that lack conductive pili are not able to grow because they are not able to reduce Fe(III) oxides yet pili is not necessary for Fe(III) oxide attachment to cell[8]. 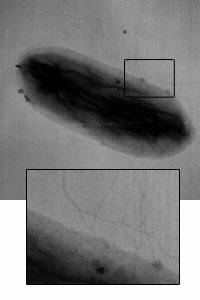 S. putrefaciens is another bacterium that is capable of Fe(III) reduction. Unlike Geobacter family, Shewanella, respirating anaerobically, utilizes substrate-level phosphorylation as a primary energy conservation mechanism to sustain growth[5]. Major organic electron donors for this particular bacterium are formate, lactate and pyruvate[6].

As indicated in the above reactions, lactate and pyruvate are not completely oxidized. Thus, it is expected that lactate and pyruvate only contribute a little to electron and carbon flow in Fe(III)-reducing environment[6]. In an anaerobic environment, the production of c-type cytochromes are stimulated in the outer membrane; If c-type cytochromes serve as a mediator for electron transfer to reduce insoluble Fe(III) oxides, this hypothesizes a possible mechanism for Fe(III) reduction in the absence of Fe(III) reductase identification[6]. Also, there is an association between proton translocation and electron transfer to Fe(III) because of the experimental finding of depressed pH value in the medium while incubating S. putrefaciens anaerobically[6]. In another study of S. oneidensis MR-1, the experimental finding suggests that the presence of different oxidation states of Fe on both the cell surface and in extracellular environment offer an insight on the Fe(III)-reducing mechanism; the researchers also conclude that surface contact-mediated electron transfer is significant[3].

The impact of Fe(III) reduction in soil and sediment is profound. For examples, its role in the removal of organic matter in a variety of sedimentary environments and decomposition of aromatic compounds[6]. Geobacter is also an electricigen which produces electricity by oxidizing organic compound and subsequently transferring electron to electrode. Furthermore, ferrous Fe is a strong reductant for a variety of contaminants including U(VI)[9]. Similarly, the mineralized product of Fe(III) reduction, magnetite, helps immobilize U(VI) through secondary formation of magnetite which U(VI) can incorporate itself into the magnetite[9].

The purpose of U(VI) reduction is to transform soluble U(VI) into insoluble U(IV) so that it can be removed from the contaminated environment. Two U(VI)-reducing microorganisms, Geobacter metallireducens and Shewanella putrefaciens, which overlap with Fe(III)-reductions, are identified[6]. Both microbes are able to grow using U(VI) as a terminal electron acceptor in high concentration (8mM) of dissolved uranium[6]. It is not surprising that there is an overlap between Fe(III) and U(VI) reducing microbes because of our limited understanding of electron transfer to oxidized metals[9]. Likewise, since the product of Fe(III) reduction has a direct impact on U(VI) immobilization, it is consistent with the fact that microbes reducing Fe(III) and U(VI) overlap with each other[9]. For Geobacter metallireducens, the U(VI) reducing reaction is:

For Shewanella putrefaciens, the reaction for growing on U(VI) is:

As stated in the above reactions, the electron donor for U(VI) reduction for Shewanella putrefaciens is inorganic, which differs from the organic electron source used in Fe(III) reduction for the same species. Even though the enzymatic mechanism of U(VI) is not well-understood, there is a plausible hypothesis that electron transport-linked phosphorylation should exist to support the growth of both microbes mentioned above that oxidize non-fermentable substrates[6]. 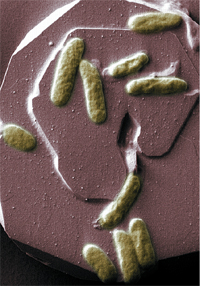 Because uranium is an undesirable contaminant in soil and water, it is critical to investigate all the possible ways to extract it from the environment. Microbial U(VI) reduction offers a relatively advantage with respect to the removal of U(VI) because the ratio of the amount of uranium removal to biomass is high, and pure form of uranium can be recovered[6]. Several studies have looked into the effect of different electron donor to the rate of U(VI) reduction. From Barlett et al.'s experimental results (2012)[2], they conclude that the overall biomass has a direct relationship with U(VI) removal. Also, acetate is a less effective stimulant for U(VI) reduction than vegetable oil and hydrogen-released compound[2]. Additional experimental results also lead to the conclusion that the choice of electron donor dictated the functional diversity of U(VI)-reducing population[1]. Another study proposes a different way to fulfill uranium bioremediation with the aid of electrodes[4]. Gregory and Lovley conclude that, with poised electrode in contaminated groundwater, microbes are able to exploit the electron from electrode to reduce U(VI) and the uranium can be removed or recovered (2005)[4]. In brief, further search is still required to achieve a more efficient and economically-favorable way to remove radioactive uranium.

Geobacter is one of the electricigens which oxidize organic compounds completely and transfer the electron to an electrode to generate electricity[7]. By generating electricity using microbes, not only is it highly efficient but also consumes potential environment contaminants[6].

In sediment fuel cell, the cation-selective membrane is necessary to ensure that the anode compartment remains anaerobic while the cathode compartment is aerobic. The proton movement across the membrane is also essential to make sure that pH remains constant through out the reaction. Electricigens share some similarity with metal-reducing bacteria such as their need to transfer electrons to extracellular insoluble electron acceptors. This can be achieved by nanowires or electron shuttles[3]. Especially of the nanowires, its presence is related to higher current output and transporting electron to a distant electron acceptor in a thick biofilm[10]. Furthermore, cooperation of non-electricigen microbes with electricigens is identified, and sometimes may be necessary, such as providing simpler organic substrate for the electricigens[10].To make microbial fuel cell applicable to real life, there are still a number of obstacles that need to be overcomed. The surface area of the anode needs to be increased to amplify power output[7] so that the electricity produced can be sufficient enough to sustain long-term energy usage. Also, direct genetic engineering of eletricigens to increase the number of contacts between the anode and the electricity- producing microorganisms in theory is a plausible improvement to generate more electricity yet no successful attempt has been reported[10]. Therefore, additional research is required to optimize the efficiency of microbial fuel cell.