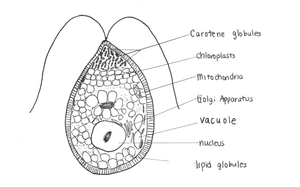 Figure 1B. Dunaliella salina modified from Shariati and Hadi[6] and Heakel, Hefny and El-Tawab[16]

Dunaliella salina is a unicellular green alga found in environments with high salt concentration [1]. It produces a distinct pink and red colour often characteristic of saltern ponds [2]. Michel Felix Dunal first discovered "D. salina" in 1838 in the south of France occupying; however, it was not named until 1905 by Teodoresco [1]. Dunaliella species are able to tolerate varying NaCl concentrations, ranging from 0.2% to approximately 35% [3]. Thus, Dunaliella salina is a hyper-halotolerant organism found in high densities in saline lakes. D. salina has adapted to survive in high salinity environments by accumulating glycerol to balance osmotic pressure. D. salina is also adapted to solar radiation using β-carotene to protect against ionizing energy. This combination offers potential in biotechnological applications for the purpose of commercial products such as lipstick due to β-carotene production [4]. Dunaliella salina is a model organism to study the effects of saline adaptation in algae [1]. In addition, the role of glycerol in D. salina as a key organic compatible solute has been used as a research model [1]. 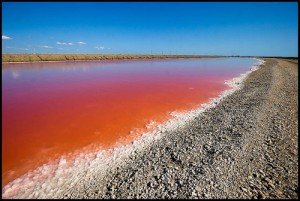 Dunaliella salina are found in high salinity environments such as salted brines, salt evaporation ponds, and hypersaline lakes [7]. The ability to tolerate high salt concentrations is advantageous, since competition is minimal as salt high salt concentrations. Dunaliella salina was thought to be responsible for the red colouring of salted brines [1]. However, carotenoids responsible for the red colouration in D. salina are found in algal chloroplasts, whereas halophilic archaea also occupying hypersaline lakes have red pigments dispersed throughout the cell membrane [2]. Although there is a much greater abundance of D. salina, the red pigments on the cell membrane of archaea are more visibly accessible. Therefore, D. salina has a much less overall impact to colouration and archaeal communities contribute more to the red colouration of hypersaline lakes. 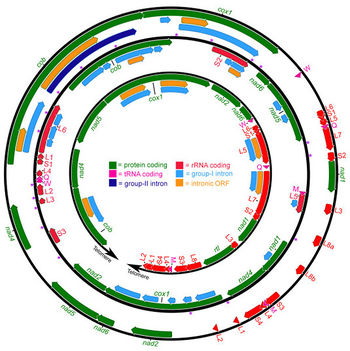 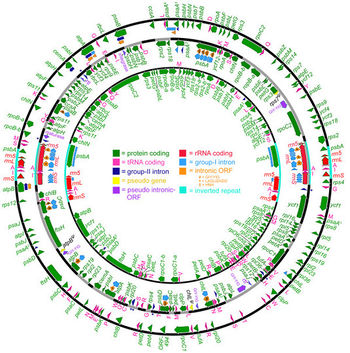 The sequencing of Dunaliella species is important to isolate different species for commercial purposes. Olmos et al. [8] sequenced five species of Dunaliella using their 18S ribosomal RNA genes. The D. salina organelle genome sequence are circular and large with approximately 60% non-coding DNA [9]. Although the biochemistry and physiology of D. salina has been researched, much about the genome was unknown until Smith et al. [9] studied the mitochondrial and plastid genome of D. salina. The mitochondrial and plastid genome contains 28.3 (12 genes) and 269 kb (102 genes) respectively [9]. In addition, Smith et al. [9] found that both genomes are highly occupied with introns: mitochondrial DNA (58%) and plasmid DNA (65.5%). The GC content of "D. salina" is relatively low compared to other Chlamydomonadales at 34.4% for mitochondrial DNA and 32.1% for plasmid DNA[9]. 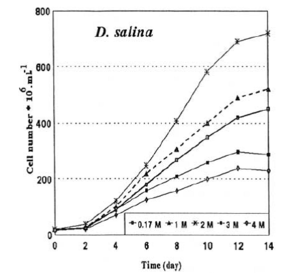 β-carotene is a type of pro-vitamin A, responsible for inhibiting the production of free radicals from ultraviolet light [3]. They are contained in the chloroplasts in lipid globules[9]. Among various carotenoid-rich microalgae, D. salina has the greatest carotene concentration making up ~10% algal dry weight[6]. Due to its ability to produce red pigmentation, β-carotene, the natural food colouring is highly demanded for cosmetic products[1]. β-carotene also contributes to the anti-oxidant effects of D. salina[11] and is used as an additive in human and animal nutrition for sources of vitamin A [3]. However, despite the positive contributions of D. salina, commercial production is limited due to the low productivity of β-carotene [3]. Farhat et al. [3] studied the effects of salinity to maximize β-carotene production and found carotenoid concentration increases with increasing salinity. In order to maximize β-carotene production, D. salina should be grown in 1.5M to 3.0 M NaCl concentration until a stable cell density is reached then increased to 4.4 – 5.0 M NaCl concentration for maximum carotenoid production [3]. 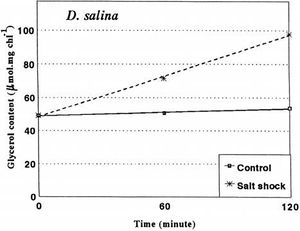 Dunaliella salina lacks a rigid wall, and the plasma membrane alone makes the cell susceptible to osmotic pressure [1]. Glycerol is a compatible solute in which not only contributes to osmotic balance of the cell but also maintains enzyme activity (Brown as stated in Oren[1]). Glycerol is produced through two metabolic processes: intracellular synthesis through a photosynthetic product and metabolism of starch in the cell [15]. The cell membrane of D. salina has low permeability to glycerol to prevent glycerol from leaving the cell [13], accounting for the high concentration inside the cell. Glycerol synthesis from starch is regulated through osmotic changes as shown in Figure 5. High extracellular salt concentration drives the synthesis of glucose. Osmotic stress affects enzyme activity of key enzymes of the glycerol metabolic pathway: glycerol-3-phosphate dehydrogenase, glycerol-3-phosphate phosphatase, dihydroxyacetone reductase, and dihydroxyacetone kinase[15]. These enzymes regulate glycerol requirements of the cell by responding to osmotic stresses. Johnson et al. [14] found that high salt concentration inside cells decrease enzymatic activity. Thus, while D. salina live in high salt concentrations, they maintain a relatively low concentration of sodium inside [15].

2. Oren A. and Rodriguez-Valera F. “The contribution of halophilic Bacteria to the red coloration of saltern crystallizer ponds.” FEMS Microbiology Ecology, 2001.

7. Brock T. “Salinity and the Ecology of Dunaliella from Great Salt Lake.” Journal of General Microbiology, 1975.

11. Tammam A., Fakhry E. and El-Sheekh M. “Effect of salt stress on antioxidant system and the metabolism of the reactive oxygen species in Dunaliella saline and Dunaliella tertiolecta.” African Journal of Biotechnology, 2011. DOI: 10.5897/AJB10.2392