Difference between revisions of "E. coli O157 in North America" 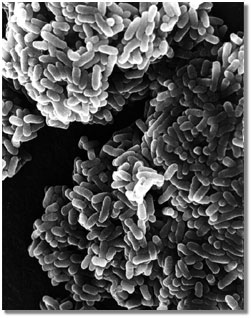 Photomicrograph of E. coli from the NSF.

E. coli O157:H7 is a harmful strain of E. coli that produces a bacterial infection in humans if it gets into their digestive tracts. According to the CDC, “In 1999 it was estimated that about 73,000 people in the U.S. got sick each year from E. coli. About 60 died.” E. coli O157:H7 is an enterohemorrhagic E. coli (EHEC for short), meaning that it causes bloody diarrhea. Other symptoms may include severe stomach cramps, nausea, and vomiting. These symptoms usually arise within 3-4 days after contact with the disease, and can be diagnosed by testing a stool sample for the bacteria. In some rare cases (usually in children and the elderly) E. coli O157:H7 infection may lead to hemolytic uremic syndrome (HUS), which can cause kidney failure and even death. However the majority of people infected get better within a week after the symptoms.[1,2]

E. coli is a rod-shaped, gram negative, bacterium that lives in the guts of warm-blooded animals. It attaches and effaces to the microvilli of the intestines via an adhesion molecule known as intimin.[4] Unlike most E. coli that naturally live in the gut, the O157:H7 strain is a pathogen and produces a Shiga toxin that causes inflammatory responses in target cells of the gut (the lesions the toxin leaves behind are the reason why bloody diarrhea is a symptom of an O157:H7 infection).

When compared to E. coli K-12 (the most commonly used avirulent lab strain), O157:H7 has a larger genome and has the ability to be a pathogen. Studies have shown that the toxin produced by O157:H7 is similar to the toxin produced by a different bacterium called Shigella flexneri. The side effects of these two toxin-producing bacteria are the same in humans. Also the GC content of the genomic islands in O157:H7 are the same as the GC content in Shigella flexneri. For these reasons it is believed that O157:H7 acquired the ability to produce the Shiga toxin and its virulence genes via a horizontal transfer of DNA from a Shigella flexneri bacterium.[5]

This disease is transmitted via ruminants. Studies have shown that the animals obtain the disease from contaminated drinking water and food. Although the animals do not get sick or show signs of having the disease, they shed the E. coli via their fecal matter. Humans contract the disease by eating microscopic amounts of the fecal matter, usually present on meat or milk from the animal, or even nearby crops that the fecal matter had come in contact with.[1] Studies have shown that E. coli can be transmitted from animals to leafy green plants by filth flies. Even the common house fly under experimental conditions has been able to transfer the disease to spinach leaves.[6] It is hard to properly cleanse plants because plants grown in soil contaminated with O157:H7 manure can absorb and store the microbe in inner plant tissue thus protecting it from sanitation.[7]

It is difficult to prevent a disease that can be present in many foods we eat on a daily basis (meat, milk, vegetables). However, there are a few steps that can be taken to prevent this pathogen. Washing your hands frequently, thoroughly cooking raw meat, avoiding the consumption of unpasteurized dairy products and unfiltered water (from pools, lakes, rivers etc.) are all measures that can be taken to avoid contracting the E. coli O157:H7 microbe.[1]

Why is this disease a problem in North America?

The bacterium Escherichia coli 0157:H7 finds a home primarily in the digestive systems of livestock animals in all North America along with other Shiga-like toxin (SLT) producing E. coli strains.[13,14] It is mostly focused in northern United States and Canada but can be found in Mexico as well.[9] Studies show that the bacteria are present in a very small quantity in just about half of all the dairy farms in N.A.[13] Cattle provide a natural reservoir for the bacterium although they don’t show any signs of infection which is indicative that they are not harmed by the bacteria.[8] Infection usually results from the ingestion of raw milk or tainted beef. The bacteria can also spread through human-human contact or through infected processing machinery.[8]

E. coli produces SLT. This toxin has been found to be a precursor and likely cause of hemolytic uremic syndrome (HUS). Approximately 8% of those infected with E. coli 0157:H7 in North America will acquire HUS.[9,10] HUS causes microangiopahic hemolytic anemia, and usually is preceded by very bloody diarrhea.[10,12] This indicates that it is a disease of very small blood vessels (microangiopathic), where destruction of red blood cells occurs (hemolytic anemia). HUS is also one of the most common causes of renal failure in children.[9] Advanced stages of HUS require dialysis due to acute renal failure and in addition platelet with erythrocyte transfusion is needed.[8] This disease affects children more often than adults. The main reason is the bacteria are shed from adults in approximately 6-8 days, whereas in children the average is approximately 13-17 days.[8]

The Current consensus amongst researchers is that antimicrobial therapy should be avoided.[10,12] Although somewhat controversial, the theory claims that the Shiga toxin is synthesized by means of an integrated bacteriophage produced as a result of the bacterial cell stimulated by a S.O.S. response to DNA damage.[10] The SOS response can be induced by a sub-therapeutic dose of antibiotics.[10] Also the bacteria are flushed out of the system quickly after infection requiring antibiotics to be taken within the first few hours of exposure. In reality, the probability that antibiotics will be administered in that time period is highly unlikely. Symptoms of Infection include bloody diarrhea, absence of fever, elevated leukocyte count, and abdominal tenderness.[8,9] Doctors should monitor their patients and focus on hydration. It is highly beneficial to have a fecal sample taken early on when symptoms of infection first begin; this is primarily done as a precaution to identify an outbreak or epidemic, but also, it is performed to specify the strains/(s) of E. coli that could be involved.[12] Studies show that 100% of the fecal samples taken within the first two days show the presence of E. coli, but this number drops as the days pass by. When the problem escalates to HUS and fecal samples are taken, the occurrence of finding the microbe responsible is greatly diminished, primarily due to the flushing out of the digestive tract by the hemorrhagic colitis (inflamed and bloody colon) and diarrhea.[12] Usually, after one week of bloody diarrhea the E. coli can no longer be found in stool samples. Some obvious precautionary measures are available for everyday home, like cooking beef until it has a grey center and shows no pink.[8]

What else could be done to address this problem

New methods that would allow a quicker and easier identification of different E. coli strains would be very beneficial for epidemiological studies.[12] Serotyping is often a tedious and difficult task currently done in very few labs equipped to identify strains other than 0157:H7.[12] Due to this, researchers are looking into herd based control methods. They try to understand how the bacteria are passed to the milk or the beef and in order to stop the contamination at the cattle. Beef irradiation is currently under way with a watchful eye by scientists in all related government agencies so far approving the procedure.[9] There are some issues with cost, packaging, and labeling which if settled could help increase the scale of this implementation. Another Idea which is being worked on currently is to aid, assist, or implement a natural immune response in the cattle. This will allow their immune system to fight the bacteria and kill it making it unable to pass through the in fecal material that can potentially contaminate nearby crops.[14] It has been found that the bacteria are not completely commensal with the cattle and that infection does illicit a minor immune response in the terminal rectums mucosal lining.[11] If this response can be amplified there could be an effective immunization that can be given to cattle to stop the spread of E. coli.

2.Tainted spinach: All bacteria may not come out in the wash

9 Mitchell B. Cohen, MD “Escherichia coli 0157:H7: Assessing and minimizing the risk from farm to fork” The Journal of Pediatrics Volume 132, Number 5