Difference between revisions of "EHEC" 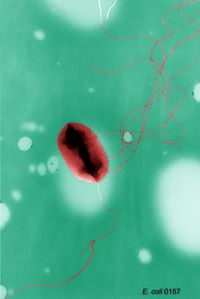 Escherichia coli O157:H7 is an emerging pathogen that causes hemorrhagic colitis. E. coli is a Gram negative rod, a facultative anaerobe motile by means of peritrichous flagella, and found in the GI tract of mammals. Most E. coli are harmless and actually are an important members of a healthy human intestinal microbial community. However, E. coli is a very diverse group of bacteria consisting of many ecotypes (the harmless variety) and pathotypes. The pathogenic strains of E. coli can cause diarrheal diseases, urinary tract infections, and even meningitis. The E. coli pathotypes that cause diarrhea are transmitted via contaminated food or water, or through contact with infected animals or people. E. coli O157:H7 was first reported by the CDC in 1982. [1] E. coli O157:H7 is one of several pathotypes classified as enterohemorrhagic E. coli (EHEC). EHEC cause disease by producing a toxin called Shiga toxin, Shiga toxin causes bloody diarrhea and in approximately 5-10% of cases hemolytic uremic syndrome (HUS), which can lead to complete kidney failure. Patients with bloody diarrhea usually recover within ten days and those who develop HUS usually recover within a few weeks, but in cases of kidney failure the patient may die. While people of any age are susceptible, the young and elderly are more often affected. Treatment of EHEC typically involves rehydration without administration of antibiotics and hospitalization in severe cases, especially HUS. EHEC infection is prevented by good hygiene, proper cooking of food, not swallowing water while swimming, and avoiding unpasteurized milk or apple cider. The prototypical E. coli O157:H7 strain is EDL933, which was isolated from Michigan ground beef that was linked to the original 1982 outbreak. The E. coli EDL933 genome was sequenced in 2001. [2] This strain of O157:H7 has been used in hundreds of scientific studies.

E. coli O157:H7 was first isolated from hamburger and cattle are considered to be the primary reservoir for EHEC O157:H7. [3] Tissue tropism of EHEC at the rectal-anal junction and its stable colonization at this anatomical location ensures its persistence and shedding in feces [4]. Not surprisingly, EHEC is often isolated from dairy farms and feedlots, including from house flies, although the latter is not necessarily a mechanical vector. [5] Appearance in herds is seasonal, being highest during the summer, leading to the rancher's anecdote that the best preventative for EHEC is snow. Numerous recent EHEC outbreaks linked to lettuce and other leafy vegetables likely result from fecal contamination that occurs on farms and during production. The exceptionally tight adherence of E. coli O157:H7 to leaf surfaces and even within the stomata of spinach leaves no doubt contribute to its transmissibility. Essentially, any food source that is subject to fecal contamination can serve as a vehicle for food borne EHEC. This includes raw milk, unpasteurized apple cider, and even hazelnuts in shells, which suggests that EHEC is quite tolerant of drying.

Contributing substantially to transmission of EHEC is its extremely low infectious dose of as few as ten microorganisms. The low infectious dose also explains its spread from farm animals to humans and person-to-person transmission. The typical incubation period is 3 days, with a range of 1-8 days. E. coli O157:H7 readily colonizes the mammalian large intestine, including humans. In mice it is known that E. coli EDL933 colonizes the intestine by growing on sugars that are not used by at least some commensal E. coli ecotypes. Since a combination of 2 or more commensal ecotypes are able to prevent colonization of mice by E. coli O157:H7, this could explain attack rates in humans that vary from 2-50%, depending upon the nature of the colonized commensal ecotypes in the humans exposed to infection. In the more carefully documented outbreaks to date, which was associated with a contaminated rural water system in Alpine, WY, it was found that the attack rate was 23% for residents and 50% for visitors, which is consistent with partial immunity of the townspeople following long-term exposure. E. coli O157:H7 is not an invasive pathogen and causes disease by interaction with the intestinal mucosa. Furthermore, infected patients typically shed a billion bacteria per gram of diarrhaea. Hence, beginning with as few as ten infecting organisms, it is likely that E. coli O157:H7 must grow to populations exceeding a billion bacteria per gram of intestinal contents in order to cause disease.

According to the CDC, the most prevalent EHEC transmission route since 1982 is foodborne, followed by person-to-person contact and waterborne infection. Following its emergence and initial outbreaks, the relative incidence of EHEC infections remains essentially unchanged. Interestingly, the relative number of EHEC outbreaks per year has increased since 1992, while the median size of the outbreaks has declined since 1990. Thus the overall rate of infection by EHEC in the US has stabilized, apparently because improved understanding of EHEC has resulted in diminished size of outbreaks despite the increased prevalence of outbreaks.

EHEC virulence factors include the ability to adhere tightly to plant materials, acid tolerance, attachment and effacement of intestinal epithelium, and production of endotoxin and Shiga toxin. The regulator of "hyper-adherence", TdcR, and OmpA, an outer membrane protein that is expressed during hyper-adherence are implicated in binding of EHEC to alfalfa sprouts and seed coats. Loss of these virulence factors results in decreased adherence.

Survival of E. coli O157:H7 during passage through the stomach or encounter of acidic conditions in the environment is ensured by at least four distinct systems for acid tolerance. There are four corresponding acid resistance (AR) gene systems. The mechanism of AR1 is unknown. AR2, AR3, and AR4 each depend upon amino acid decarboxylation and consequent consumption of protons, whcih results in pH homeostasis. Expression of the AR systems is induced by acid environment, anaerobiosis, entry into stationary phase. Collectively, one or more of these systems is likely to be "on" when EHEC is exposed to acid, as would be expected to occur upon consumption by a potential host and subsequent passage through the stomach. 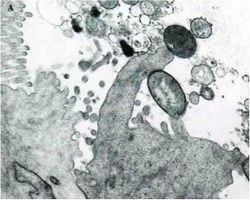 A cardinal virulence factor of EHEC is the Locus of Enterocyte Effacement (LEE), which is contained on a pathogenicity island that encodes all of the gene products needed for attaching and effacing the colonic epithelium. Following initial attachment of the EHEC cell to an epithelial cell, a number of LEE encoded proteins are secreted, some into the host cell. These proteins include EspA, EspB, and EspD. Translocation of these proteins into the host cell is essential for changing the host physiology. EspA may be part of the translocation machinery because it forms filamentous appendages between the bacterium and host cell. EspB is translocated and apparently alters host cell signal transduction pathways. These LEE proteins are secreted from EHEC by a type-III secretion system also encoded by LEE genes. The next stage of attachment and effacement involves intimate attachment of the EHEC cell to the host cell. To accomplish this, EHEC translocates its receptor protein, translocated intimin receptor (Tir), to the host cell where it is expressed on the host cell membrane. Simultaneously, EHEC expresses an a outer membrane protein called Intimin that is encoded by the eae gene. Thus EHEC encodes both its own receptor and its adhesin. Following this tight association between the EHEC and host cells, actin pedestals are formed in the host cell, which push the host membrane to lengths up to 10 µm away from the host cell surface. The role of pedestals in pathogenesis is not completely understood.

Like all Gram negative bacteria, EHEC outer membranes have an outer facing leaflet of lipopolysaccharide (LPS). LPS consists of lipid A, core polysaccharide, and O-Antigen, which consists of 40-80 repeating subunits of 4 sugars that in the case of E. coli O157:H7 is unique to the O157 serogroup, containing N-acetyl-d-perosamine, l-fucose, d-glucose, and N-acetyl-d-galactose. The core polysaccharide essentially is conserved in all E. coli ecotypes. Lipid A is the toxic component of LPS, also known as endotoxin, which is a heat-stable toxin. Lipid A consists of a phosphorylated disaccharide of glucosamine linked by a beta-1,6 linkage and modified by fatty acids, in addition to the first ketodeoxyoctanoate of the core polysaccharide. Endotoxin is released by cell lysis rather than being secreted. Endotoxin is less potent and less specific than exotoxins. Endotoxin can cause fever, hemorrhagic shock, and diarrhea.

A second cardinal virulence factor of E. coli O157:H7 is Shiga toxin, which causes bloody diarrhea and hemolytic uremic syndrome (HUS), a sequelae of EHEC infection. E. coli O157:H7 produces Stx-2, an A-B toxin comprised of a single A subunit noncovalently associated with a pentamer of B subunits. The B subunits bind specifically to globotrioacyl ceramide on host cell cytosolic membranes and facilitates A-subunit uptake by endocytosis. Stx is an N-glycosidase that targets the 28S rRNA, which it depurinates at a specific adenine residue, causing protein synthesis to cease and infected cells to die from apoptosis. Stx receptors are found on intestinal endothelial cells and also on glomerular endothelial cells. Death of colonic cells and lesions in small blood vessels causes bloody diarrhea. In the kidney, Stx damages glomerular endothelial cells by binding to globotrioacyl ceramide. Consequent to glomerular endothelial cell damage is a loss of glomerular barrier function that allows the passage of red blood cells and proteins into the urinary space. Thus, Stx causes glomerular endothelial cell dysfunction, inflammation, and microvascular thrombosis. The resulting compromise in blood supply is thought to contribute to loss of kidney function.

The attack rate of persons exposed to E. coli 0157:H7 is 2-50%. An estimated 265,000 Shiga toxin positive infections occur each year in the United States, of which 36% are caused by E. coli 0157:H7. Persons who are infected can develop a range of symptoms, including mild diarrhea or no symptoms at all. Usually the first symptom is non-bloody diarrhea, abdominal cramps and pain, and fever of short duration. Vomiting occurs in about one-half of patients during this first phase of infection. In the following 1-2 days the diarrhea becomes bloody. This stage of infection lasts for 4-10 days. Normally the disease is self-limiting. However, in 5-10% of cases, primarily in children and the immuno-compromised, the patients develop a potentially life-threatening complication, HUS. The leading cause of renal failure in children is HUS and often requires dialysis. There is a 3-5% incidence of mortality with HUS. EHEC also can cause neurological complications in 25% of HUS patients, including seizure, stroke and coma. Patients with bloody diarrhea symptoms should seek medical attention.

Diagnoses of E. coli 0157:H7 must be reported to the Nationally Notifiable Diseases Surveillance System (NNDSS) at CDC. In all cases of acute community-acquired diarrhea stool samples should be cultured for E. coli 0157:H7 on cefixime tellurite-sorbitol MacConkey agar (CT-SMAC), or CHROMagar O157. Sorbitol non-fermenting colonies should be assayed for Shiga toxin using EIA or PCR. Sero-diagnosis of O157 and H7 antigens is necessary to confirm the isolate is E. coli 0157:H7. Since all E. coli O157:H7 strains produce Shiga toxin, identification of O157 and H7 antigens is sufficient to consider it STEC. Clinical laboratories should report and send E. coli 0157:H7 isolates and Shiga toxin-positive strains to state or local public health laboratories for additional characterization as soon as possible. Early diagnosis of E. coli O157:H7 infection is important for prompt treatment since initiating parenteral volume expansion early in the course of infection is thought to improve patient outcome by decreasing the risk for renal damage.

The disease usually is self-limiting and most patients recover without specific treatment within five to 10 days. Antibiotics are counter-indicated for treatment of E. coli 0157:H7 infections as studies have shown that antibiotic treatment may increase the risk of HUS. Non-specific supportive therapy, including hydration, is essential.

E. coli 0157:H7 is transmitted by the fecal-oral route. It is most frequently associated with hamburger or other ground beef products, unpasteurized milk and fruit juices, and leafy green vegetables. Hence it is important to avoid consuming undercooked meats and unwashed vegetables. E. coli 0157:H7 can also be transmitted via person-to-person contact. Sanitization and hand washing are important after using the bathroom or changing diapers, before preparing or eating food and after contact with animals or their environments. 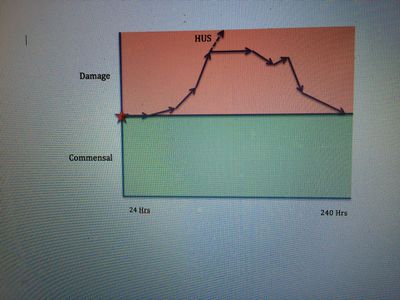