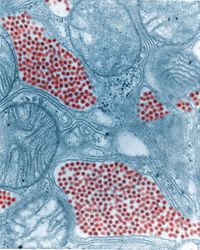 Eastern equine encephalitis virus (EEEV) is an arbovirus (i.e. transmitted through arthropod vectors like mosquitos) that was discovered in 1933. EEEV has infected human and horse populations on the East Coast of the United States periodically through the years, resulting in death and extreme neurological impairments in those who survive (2). EEEV epidemics in humans are sporadic, but the number of cases has been rising in the last decade. The United States has an average of 11 human infections annually; however, in 2019, 38 cases were reported to the CDC (3). EEEV has a death rate estimated to be between 35 and 75%, the highest death rate of any mosquito-borne virus in North America (2).

While there is a correlation between changes in the weather and the seasons and increased EEE cases in the US, the exact cause is unknown (14). Current research focuses on the pathology of EEEV that is not fully understood and possible weaponization of the virus (17, 18).

The virus’s shell is icosahedral shaped and consists of two layers: outer transmembrane envelope and inner capsid layer. The outer layer contains E1 and E2 proteins. E1 protein’s function is associated with the fusion of the host cell and E2’s function is associated with receptor binding to the host cell (5). E2 has a binding site for heparan sulfate (HS), which allows the virus to avoid lymph node detection. The lymphatic system, which is a network of organs and tissues that filters out toxins, works in conjunction with the immune system by using lymphatic fluids to transport white blood cells and other antibodies. The lymph nodes, which contain immune cells, are able to signal an immune response in the presence of antigen such as a virus (7). E1 and E2 are unable to bind to DC-SIGN (dendritic cell-specific intercellular adhesion molecule-3-grabbing non-integrin) and L-SIGN (liver/lymph node-specific intercellular adhesion molecule-3 grabbing non-integrin) (5). EEEV is internalized by the host through endocytosis, which allows the nucleocapsid to be released into the cytosol of the host. The capsid is able to bind to the host cell’s ribosomes (5).

The alphavirus genus has evolved mechanisms to evade the host’s innate and adaptive immune response. New world alphaviruses like EEEV, Western equine encephalitis virus (WEEV), and Venezuelan equine encephalitis virus (VEEEV) have two main mechanisms to evade myeloid cells’ response to the infection: limiting myeloid cell tropism and replication or antagonizing its responses to the virus (8). Myeloid cells react to viral infection through receptors (PRRs) located in the cell’s membrane and secrete antiviral molecules called interferons. Coding and non-coding regions in the alphavirus can prevent and inhibit interferon signaling and induction by binding to the cell’s non-translated region and structural proteins (8). Furthermore, non-structural protein 2 (nsP2) halts transcription and translation of the host’s DNA, allowing the host cell to only translate the viral genome (8).

EEEV, in particular, is unique from other alphaviruses in that it has an E2 protein that disrupts the binding of heparan sulfate to lymphoid tissue and affects interferon induction. EEEV 3’ non-translating region inhibits myeloid replication and interferon induction through the binding of microRNA, miR-142-3p (8). The transmission cycle of alphaviruses also has an impact on the virus’ ability to replicate and inactivate myeloid cells. The structure of viral surface glycoproteins is affected by the addition and processing of carbohydrates, which differ between arthropod and mammalian cells. The addition of carbohydrates may interact with host cell surfaces differently based on the organism’s origin and may cause unique effects on myeloid cells by expressing specialized receptors (8). These structural differences lead the mammalian cell-derived virus to be a greater inducer of interferon compared to mosquito cell-derived virus (8).

EEEV is the only virus that is part of the Eastern equine encephalitis complex. EEEV is divided into four subtypes based on its antigenic properties. Subtype I/lineage I includes North American EEEV (NA EEEV) and most other strains from the Caribbean (9). Subtypes II to IV includes South and Central American (SA EEEV) strain. The division of NA EEEV and SA EEEV subtype is based on the substantial nucleotide divergence between the genomes of the two groups and their adaptation to different geographical areas and hosts. NA EEEV is highly conserved in its lineages; less than 2% nucleotide differences in the NA EEEV genome was observed between 1933 and 2007 (10, 11). While the transmission of NA EEEV is largely through an enzootic cycle between Culiseta melanura mosquitos and an avian host, the disease itself is spread by other mosquito species (i.e. Aedes), which are capable of building a bridge between the infected bird and uninfected mammals (12). The C. melanura preference to feed largely on birds may result in the genetic conservation and constraint observed in the NA EEEV strain (10).

The ecological understanding of SA EEEV is poor. Compared with NA EEEV, SA EEEV has a higher genetic diversity (9). This may be a result of their tropical forest habitat: SA EEEV vectors have a wide range of feeding behavior, which includes wild birds, ground-dwelling rodents, marsupials, and reptiles (9). This confers a broad range of vector diversity and could contribute to the diversity of SA EEEV genetic lineages. Most of the hosts are ground-dwelling mammals that limit the distribution of SA EEEV in comparison to the efficient geographical dispersion of NA EEEV by avian hosts (9). It may be possible that this limited mobility has allowed for higher diversity in SA EEEV lineages due to decreased competition amongst strains and increased independent evolution of certain SA EEEV strains (9).

Current studies emphasize the need for researching patterns of dissemination of EEEV. ArboNET, a national surveillance system for EEEV, demonstrated that EEE cases are primarily concentrated in the Atlantic and Gulf coasts of the United States and transmissions are not represented in the Western US regions (13).

Complex geographic factors like climatic seasons affect transmission (14). In Florida, EEEV varies seasonally (peaking in summer months) and occurs year-round (14). By comparing Florida seasonal data between two years during peak arboviral transmission, it was shown that Culex erraticus mosquito population was the most abundant in January (14). This data was not consistent with the peak transmissions. Although the majority of Culex erraticus commonly fed upon avians among the host classes during winter months, they fed upon mammals in the summer. The shift in mosquitoes’ feeding behavior may play a role in EEEV transmission in Florida. Despite seasonal fluctuations in their abundance, avians are popular hosts year-round due to migration (14). Also, the Florida Department of Health used a sentinel chicken surveillance program for eleven years and calculated EEEV seroconversion rates geographically. There were statistically significant seasonal variations in infections for the majority of Florida, except the Panhandle region (15). With little seasonality patterns, that region could be the possible source of transmission for Florida and to other northern states (15).

Though there is currently no licensed vaccine for the EEEV, current research holds some promising candidates. A study in 2007 at the University of Texas developed two attenuated vaccine candidates (16). Using the non-structural and cis-acting elements of Sindbis virus (another member of the alphavirus genus) and the structural protein genes from EEEV, chimeric virus particles were engineered. Two different chimeras were created: the structural protein genes came from either the North American or South American strain of EEEV (16). Both chimeric varieties conferred immunity against EEEV when injected into mice (16).

A study at the Center for Vaccine Research of the University of Pittsburgh investigated live-attenuated vaccines (LAVs) that mimic a natural virus infection leading to high levels of long-lasting neutralizing antibodies. LAV candidates were created by disrupting four virulence loci in a wild-type EEEV strain (17). The specific locations would affect either EEEV virulence or virulence of other encephalitic alphaviruses. Mice were injected with the LAV candidates through subcutaneous infection (sc) or intracerebral infection (ic) (17). For both sc and ic, some LAV candidates were shown to be effective with up to 100% survival rate. However, there were also LAV candidates that were less effective with 0% survival rate. Mice that survived subcutaneous vaccination were then challenged with either sc (104 or 105 pfu) or a standard dose of aerosol infection of the wild-type EEEV strain (17). The challenge results reveal that certain LAV candidates protected the mice consistently in the sc challenge and the three-four mutation viruses protected less consistently against the aerosol challenge. The study suggests that mutating virulence loci is an adequate strategy for producing LAVs, but is not 100% effective against EEEV (17).

In the late 1990s, EEEV was on the list of the most dangerous threats in biological warfare cited by the CDC and the Biological Weapons Convention (18). Current research has identified aerosolized EEEV as the most likely and most lethal route of infection (18). Infection via the aerosol route can induce rapid neuro-invasion and increase the mortality rate above other naturally occurring epizootic outbreaks (18). In a 2019 study, the median lethal dose (MLD) by aerosol route was calculated using Balb/C mice. The MLD calculated in the model was 145 pfu/mouse, clinical signs were observed three to four days post-administration of dosage including ruffled fur, loss of balance, subdued behaviors, tremors, and death (18). Mice that received a higher than pfu dosage had a 100% mortality rate with severe neurological symptoms before death. In the event of aerosol infection through biological warfare, countermeasures must be delivered within 48 hours to prevent virus replication in the brain (18).

Animal testing has expanded to nonhuman primate models, such as the old world (rhesus and cynomolgus macaques) and new world monkeys (marmoset), in an effort to find the ideal candidate to test the efficacy of countermeasures. The difference between small rodents and non-human primates affect the dosage of EEEV through aerosol infection (19). The mean time to death (MTTD) for marmoset was four to nineteen days versus the three to six days observed in the Balb/C mice (19, 20). Severe clinical signs were also observed earlier in marmoset and brain autopsy of the marmoset reveals consistent brain anomalies in fatal human EEEV cases. Though the MLD was higher in the Marmoset model (2.05 102), the study is limited in its small sample size and requires further research to achieve statistical significance (19).