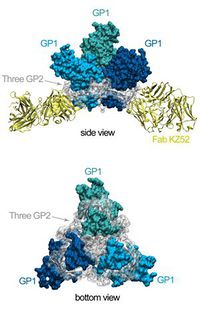 All monkeys in the experimental groups came down with the disease, confirmed to be the same syndrome observed in monkeys infected with non-aerosolized EBOV. However, even in the low exposure group, the symptoms of the resulting hemorrhagic fever were reminiscent of the most severe cases documented in humans, and also included previously unobserved symptoms such as subcutaneous and venipuncture site bleeding and serosanguinous nasal discharge . Disease caused by inhalation of the virus also causes a more rapidly lethal disease, killing subjects in the low exposure group within 4 to 5 days from onset of clincal syptoms (about 9 days post-exposure)[14].