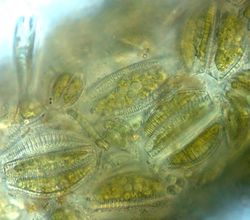 The diatom Epithemia turgida contains endosymbiotic cyanobacteria in many of the cells. The endosymbionts are visible as round bodies within the cytoplasm.

Cyanobacteria have flexible photosynthetic apparatus that allows them to utilise light at very low levels, making them ideal symbionts for a wide range of organisms. Cyanobacteria are unique among the prokaryotes in their ability to form symbioses with a broad range of hosts [1]. They play role of “chloroplasts” in symbioses with a variety of non-photosynthetic partners such as marine invertebrates, where cyanobionts provide the host with carbon. Also, cyanobionts often perform the role of nitrogen fixers, especially in photosynthetic hosts such as diatoms, supplying the host with nitrogen. Symbiotic associations between cyanobacteria and marine organisms are most important in the oligotrophic waters of the global ocean, where cyanobionts make it possible for a wide range of marine organisms to survive in nutrient depleted waters. The most common marine organisms harboring cyanobacteria are corals, diatoms, dinoflagellates, seagrass and sponges.

The symbiotic cyanobacteria living in marine environment, as opposed to the terrestrial symbioses, have received little attention. In fact, to date there are less than a dozen contemporary scientific investigations of these associations and a better understanding of cyanobionts is needed. Recent findings, nonetheless, open questions about evolution of such symbiosis specificity, metabolic interactions, and cellular adaptations, all of which are areas of great interest in symbiotic research, especially because it may explain the ecological impacts of cyanobionts living in marine environment.

Richelia intracellularis and Calothrix rhizosoleniae are filamentous heterocystous cyanobacteria that live in symbioses with many abundant diatoms such as Hemiaulus, Rhizosolenia and Chaetoceros [3]. These cyanobacterial symbionts are important because they provide fixed nitrogen to their nitrogen-limited hosts. This impacts both the host and the ecosystem.

Episodic blooms of the diathom Hemiaulus hauckii and its diazotrophic (associated with nitrogen fixation) cyanobacterial symbiont Richelia intracellularis can reach very high densities and have important ecological impacts for the ecosystem. The blooms dominate the carbon drawdown in the offshore tropical river plumes and contribute substantially to new N inputs [4]. The blooms of these diatom-diazotroph assemblages increase significantly net primary productivity as well as the ecosystem carbon export ratio, which also leads to biological uptake of dissolved inorganic carbon and silicate. Also, Hemiaulus and its nitrogen-fixing endosymbiont have been implicated as contributors to the formation of some Mediterranean sapropels [5]. As drivers of nitrogen fixation and carbon drawdown in river plumes and oligotrophic waters, diatom-diazotroph assemblages have a global impact that is sensitive to climatic and anthropogenic influences.

Diatoms of the family Epithemiaceae also possess a unicellular nitrogen-fixing cyanobacterial endosymbiont [6]. When external nitrogen becomes limiting, the number of endosymbionts per diatom rises and mean endosymbiont surface area:volume increases. This leads to an increase in the contribution by the endosymbiont nitrogen fixation to the diatom nitrogen budget under N-limiting conditions. Flexibility of the endosymbiont load enables the diatom to be more energy efficient and compete more efficiently with other asymbiotic diatoms in nitrogen-limited habitats. In addition, the diatoms that host nitrogen-fixing cyanobacterial symbionts are high in protein, which may benefit the organisms grazing these diatoms. For instance, tadpoles fed with filamentous green algae with diatoms hosting diazotrophic cyanobacterial symbionts developed more quickly and metamorphosed at larger sizes than tadpoles raised on other diets because the protein content in the food with these diatoms was twice as high as without the diatoms [7]. Diatom-cyanobacterial symbiotic relationships are widespread and important for oceanic primary productivity. The symbiotic diatom populations can be an equally important source of new nitrogen as the free-living colonial diazotrop,Trichodesmium, which is usually considered largely responsible for nitrogen fixation in the open ocean. Symbiont abundance and their role in oceanic nitrogen fixation may have been underestimated due to the need to use epifluorescence to reliably identify the symbiont [8].

Neighbour-joining phylogenetic tree of nifH-deduced amino acid sequences from cyanobiont-bearing heterotrophic dinoflagellates (only cyanobacteria are depicted). Multiple sequences clustering together are collapsed into the triangle. Sample number and the individual host with symbionts are indicated in bold with the number of sequences in square brackets. Reference sequences are given with GenBank accession numbers in parentheses. O.: Ornithocercus 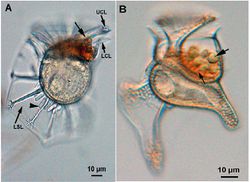 Cyanobacteria-dinoflagellate symbiotic relationship is one of the main reasons of widespread distribution of heterotrophic dinoflagellates in the oligotrophic subtropical and tropical oceans [9]. Histioneis sp. and Ornithocercus sp. contain epi- or endobiotic cyanobacteria. Immunolabeling-TEM using nitrogenase antisera revealed that some cyanobionts have a nitrogen-fixing capacity and probably temporally segregate their physiological processes to protect nitrogenase [10]. The mixed assemblage of a few nitrogen fixing cyanobacteria partners residing among a larger population of non-nitrogenase localizing cyanobionts as in Histioneis depressa offers an advantage over other hosts that only contain non-N2-fixing cyanobiont types. Thus, dinoflagellate’s requirement for fixed nitrogen as well as carbon is the driving force for the relationship.

Light microscopy, 16S rRNA and nifH gene analysis lead to the conclusion that cyanobacteria are dominant in the epiphytic microbial community [11]. The nifH gene expression patterns also show that heterocystous phylotypes may be the dominant diazotrophs during the day and non-heterocystous at night. Cyanobionts are usually found associated with the leaves of the seagrass Cymodocea Rotundata as small adhering patches of pigmented microbial aggregates of thin biofilms. Seagrass benefits from the diazotrophic nature of the cyanobacteria, and the diazotrophic activity of the cyanobacteria is stimulated as indicated by the high nitrogenase levels recorded.

Cyanobacterial endosymbionts are almost ubiquitous in marine sponges and their presence can cause significant modifications in sponge morphology. Cyanobacterial symbionts are usually intercellular, but sometimes occur in specialised vacuoles termed ‘cyanocytes’ [1]. Photosynthates in the form of glycerol and organic phosphate are transferred from cyanobacterial symbionts to sponge hosts supplying up to 50% of the sponge’s energy budget and 80% of its carbon budget. Synechococcus spp. are the most common cyanobacterial symbionts found in sponges, while Oscillatoria spongeliae has been reported over a wide geographic range [1]. The following example demonstrates one of the most important findings related to the latter. Dysidea herbacea, a shallow-water sponge common throughout the Indo-Pacific, harbours large numbers (up to 20% of the symbiotic association’s volume) of the cynobacterial symbiont Oscillatoria spongeliae. By using cellular localization of selected compounds, it was determined that the polychlorinated metabolites ascribed to Dysidea herbacea are localized in the symbiont Oscillatoria spongeliae. Indeed, this was the first demonstration that marine natural products ascribed to a sponge are localized in symbiotic cells. In this case, the polychlorinated metabolites produced by the symbiont deter fish-feeding, and possibly confer increased fitness to the sponge-cyanobacterial symbiosis. [12]