Difference between revisions of "Ecosystem and Microbial Populations in Pangong Lake, Himalaya" 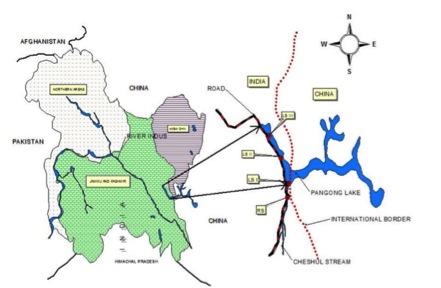 Pangong Lake, also known as Pangong Tso, is a high altitude brackish water lake expanding from India to Tibet[1]. It is 4350 m above sea level, with a length of 134 km and a catchment area of about 2000 km2[1]. Lying in the valley of the upper drainage basin of Indus River, Pangong Lake is the largest and most brackish wetland in the Trans-Himalayan cold desert ecosystem[1]. Due to its physical isolation and short summer months, Pangong Lake is less well understood than lowland lakes, and it is characterized by extreme environmental conditions and a relatively simple ecosystem in its lake body[1].

Although melt water from catchment and rainwater keep feeding into Pangong Lake, the lack of an outlet and continuous evaporation of surface water raise the salinity to an average of 2-4% [1]. In addition, the lake water has a basic pH ranging from 8.74 to 9.11. Water temperature of Pangong Lake also varies greatly throughout the year due to its geographic location in the Ladakh cold desert. The surface water temperature reaches up to 19°C while the bottom water temperature only reaches 8°C in summer months. During winter, Pangong Lake remains frozen from late December to early April[1]. Therefore, Pangong Lake is categorized as a cold monomictic lake[1].

Due to its high salinity and harsh environmental conditions, Pangong Lake body has relatively low biodiversity. No macrophyte has been found, However 23 taxa of phytoplankton have been recorded and together they are grouped into five classes: Bacillariophyceae, Chlorophyceae, Cyanophyceae, Xanthophyceae, and Rodophyceae[1]. Phytoplankton growth in Pangong Lake is controlled by several physio-chemical parameters including light intensity, temperature, nutrient concentration, lake currents, as well as predation by zooplankton [2][3]. Populations of phytoplankton only dominate during warm summer months[1]. In addition, the diversity and density of phytoplankton are inversely proportional to lake water salinity[4].

The zooplankton population consists of adult Diaptomus species and their Nauplius larva. Besides high salinity and low temperature, zooplankton organisms in Pangong Lake have to protect themselves against high UV radiation. Both adult Diaptomus and their Nauplius larva synthesize special photo-protective compounds to capture harmful UV-induced radicals[5]. Carotenoids and melanin also form pigmentations on the body surfaces of zooplankton organisms. Together, these mechanisms act to protect the organisms from UV radiation.

No fish has been recorded in Pangong Lake body[1]. However, in its inlet Cheshul stream, three fish species have been identified: Schizopygopsis stoliczkae, Triplophysa stoliczkae and Triplophysa gracilis[1]. These species are also identified from Kashmir Valley[6], equatorial high mountain lake Lago San Pablo[7] and Antarctica saline lakes[8]. These findings suggest that these fish species are eurytopic and can tolerate wide ranges of environmental fluctuations to survive in extreme conditions.

Microbial species in Pangong Lake are generally psychrophilic and halotolerant. These characteristics give the organisms competitive advantages to survive in this harsh isolated habitat. Many recently discovered microorganisms from Pangong Lake are of particular interest as they produce distinctive cold-adapted secondary metabolites, and their key enzymes remains active in low temperature environments. The metabolite compounds and enzymes are suggested to be economically significant and can be potentially applied to industrial, agricultural and medical processes in the future.

The Paenibacillus genus are rod-shaped bacteria which are capable of aerobic or facultative anaerobic respirations[9]. The Paenibacillus agaridevorans strain 26 was isolated from water and sediment samples from Pangong Lake[10]. It is a non-motile gram-positive psychrotolerant bacterium that grows optimally at 10°C and 20°C. P. agaridevorans strain 26 produces an extracellular cold-adapted lipase to hydrolyze substrate to obtain carbon source for cell metabolism and growth[10]. This enzyme is of particular interest as it is used widely in fat and oil processing, pharmaceutical production, paper manufacture and cosmetics[11]. 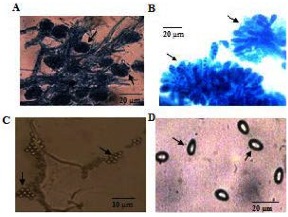 Thelebolus microspores L-22 is a strain of psychrophilic fungi isolated from water samples of Pangong Lake. This strain grows optimally at 4°C and can tolerate up to 6% salinity[12]. Genetically close strains were also isolated from the Ross Sea and Dry Valleys regions in Antarctica[13][14]. Similar to Pangong Lake, these areas are subjected to long periods of subzero temperature. T. microspores L-22 synthesizes cold-adapted melanine, mycosporine, antifreeze proteins, antioxidants, glycogens, exopolyaccharides, trehalose, sterols and fatty acids to protect itself from the extreme environment[15]. These proteins and metabolites are also important for biotechnological and pharmaceutical industries as they can withstand low or moderate temperatures[16]. 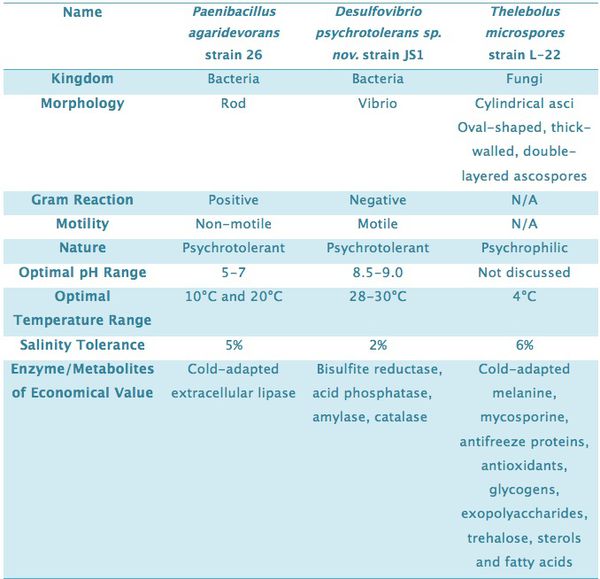