Difference between revisions of "Ehrlichia canis" 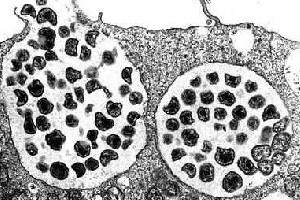 Ehrlichia canis is a small, rod shaped, intracellular, tick-transmitted, Gram-negative, {alpha}-proteobacterium transmitted by the brown dog tick, Rhipicephalus sanguineus. It resides as a microcolony inside an intracellular vacuole that is membrane-lined and is mainly within monocytes and macrophages of mammalian hosts. The genus Ehrlichia is closely related to the genera Rickettsia, Anaplasma, and Wolbachia. They all share the similar intracellular structure. [1]

E. canis was first discovered in Algeria in 1935 and has now been known to have spread all over the United States, Europe, South America, and Asia. It causes ehrlichiosis in dogs, which is an infection transmitted by the tick. [2] Infected dogs that are not treated can become asymptomatic carriers of the disease for years and eventually die from massive hemhorrage. Little is understood about the pathogenesis of canine and human ehrlichioses so the E. canis genome has been sequenced for more information critical for the development of effective vaccines. The complete genome was sequenced by the Joint Genome Institute by using a combination of 3-kb, 8-kb, and fosmid (40-kb) libraries. [3]

The genome of E. canis consists of a single, circular chromosome. Its genome is smaller than other ehrlichiae. Several interesting genome features include a large set of proteins with transmembrane helices and other components prominent in proteins associated with pathogen-host interactions. There were other features that portrayed immune evasion and facilitation of persistent infections. [4]

E. canis is an aerobic organism that is unable to use glucose or fructose as a carbon or energy source. The main energy and carbon source is amino acids. Because it is a persistent infection, E. canis has characterisitics that protect itself from host defenses. It lacks peptidoglycan and lipopolysaccharides, two major molecular patterns that are pathogen-associated in the cell walls of gram-negative bacteria. This difference in the cell walls of E. canis makes it unrecognizable by typical receptors such as Toll-like receptors 2 and 4. To make up for the lack of peptidoglycans, it is predicted that around 310 proteins containing transmembrane helices form a complex cell wall structure. Also, it is suggested that cholesterol is acquired from the host and incorporated into the outer cell membrane to compensate for the lack of stability due to absence of peptidoglycans. Structural stability of its outer membranes are probably based on covalent and noncovalent associations between outer membrane proteins. [5]

The enzymes required for the tricarboxylic acid pathway, along with the enzymes needed for transfer of amino acids to the pathway, are all present in the metabolism of E. canis. Both a gluconeogenesis pathway and a nonoxidative pentose-phosphate pathway exist as well. Biosynthetic pathways for aspartate, lysine, arginine, proline, glutamate, and glutamine are also found in E. canis. Translocases for ATP and NADH are not present in E. canis, which suggests that it has its own intracellular ATP production. [6]

E. canis has a direct relationship with the adult tick, where it maintains its complex life cycle. There is indirect interaction with dogs as E. canis causes a persistent infection called canine monocytic ehrlichiosis. [7] It is related to Ehrlichia chaffeensis, which causes human monocytic ehrlichiosis. This is also transferred through a tick bite. [8]

Studies have shown that "partial feeding of nymphs infected as (tick) larvae with E canis" is one possibility for these ticks to be able to infect dogs. The Ehrlichia canis organisms are found in the midgut and salivary glands of infected adult ticks. [9]The tick can transfer the organism, E. canis, from its saliva to the dog while feeding. Once inside the dog, the bacterium infects monocytes and are capable of spreading throughout the lymphatic system, including the spleen and liver. This will lead to an abnormal increase in cell size and number, known as hyperplasia. Replication and cell division can lead to further spreading of the bacterium throughout the host and eventually leads to anemia and an increase in platelet count. [10] Once the dog is infected, several signs of ehrlichiosis include marked thrombocytopaenia, pyrexia, reduction in the packed cell volume and the presence of E. canis in peripheral blood mononuclear cells. If the infection is not treated, the disease can take on a chronic form, where bone marrow will fail to develop along with anemia, making the dog more susceptible to other infections. The dog will respond poorly to treatments at this stage and soon die of hemorrhage. [11]

There is not yet any known compounds or enzymes that are produced by E. canis.

A recent finding in the molecular characterization of E. canis is a set of major immunoreactive proteins including glycoproteins and an outer membrane protein family containing 25 paralogous genes “that could be differentially expressed in the tick and mammalian hosts, contributing to persistent infections of the natural hosts”. Three of the major immunoreactive proteins found correspond with the human pathogen, E. chaffeensis. These kinds of glycoproteins have never been found in pathogenic bacteria before and are potentially important targets of the host immune response, attachment to the host cell, and other vital roles in pathobiology. [12]

A common feature of canine monocytic ehrlichiosis is ocular lesions. A study was done to determine the prevalence, type and response to treatment of ocular lesions associated with the disease in several affected dogs. Exudative retinal detachment was the most common ocular symptom along with anterior exudative uveitis and optic neuritis. Studies concluded that canine ehrlichiosis should be considered when dogs are diagnosed with these symptoms. [13]