Epstein-Barr budding in a B cell From: msdiscovery.org [2]

The Epstein-Barr virus (EBV) is one of the two human host-specific viruses in the subfamily Gammaherpesvirinae, along with Kaposi's Sarcoma, a virus normally associated with lesions in AIDS patients. It is the most common virus among the human population. More than 95% of the human population contain EBV antibodies, meaning that they have come into contact with the virus at some point in life and it is lying latent. Many people are asymptomatic when infected, but under certain stresses diseases, such as infectious mononucleosis (IM), can arise. EBV was found to be the main virus responsible for Burkitt's Lymphoma in 1964, and later on was found to be correlative with Hodgkin's Lymphoma and nasopharyngeal carcinoma. EBV is not the sole cause of these cancers, but it does play an important role in their development. A defining marker of a virus is that it requires a host to replicate and survive, and when EBV was discovered, it was very difficult to grow on any medium.

Herpesviruses are characteristically icosahedral, 20-sided, and 70-100 microns in diameter, which led Epstein to characterize EBV with this family, however because he could not run standard tests of the other herpesviruses at the time, he concluded it must be a new strain [1].

EBV is a double-stranded DNA virus, making it more stable and less likely for mutations than RNA viruses. EBV is 184 kb pairs in length. The genome shows around 70 predictable open reading frames and there are two different strains. The strains differ in their latent proteins, but they are not associated with any specific disease. Analyzing repeat genes can be used in studying outbreaks [2]. The genome codes for latent and lytic proteins, and there are RNA transcription proteins whose functions are still unknown. It is an enveloped herpes virus, which means it can cause a life-long latent infection. EBV is very large for a herpesvirus and is surrounded by an outer layer comprised of cellular membranes from infected cells, adding an extra 50-100 nm to its size. The envelope is necessary for infectivity and sensitivity.

EBV is transmitted through salivary contact. Mononucleosis is commonly called the "kissing disease" because it is often spread through the saliva when kissing. It is also possible to catch EBV from sharing eating utensils and drinks. Targets of primary infection are most likely B cells near the tonsillar epithelia or other lymphoid organs in that region. Though EBV can infect epithelial cells and B cells, it is imperative for EBV's replication cycle to infect B cells [17]. Epithelial cells enhance transmission from different hosts and may play a role in establishing latency. EBV has been discovered in the uterine lining and semen of IM patients, so EBV can likely be spread through sexual contact as well [2]. Transmission through blood and air are very rare. One study shows that vertical transmission through the mother is possible, but not definite. The study was done with HIV-positive women as well and having the disease does not increase the risk of transmission to a fetus [18]. The cell membrane contains glycoproteins that are essential for invasion of a host cell.

The infectious dose is still not known for sure. There have been studies trying to quantify viral output in saliva, though the trial was inconclusive. The virus in the saliva was replenished at a very fast rate even after numerous mouth rinses [19]. The epithelial cells are those most known to cause infection and transmission, but they can be infected from other epithelial cells or B cells. Equations were created to quantify virus shedding in EBV positive individuals, but the amount it takes to infect another host is still unclear. Any contact with an infected person's saliva can cause transmission of EBV. If contact occurs after childhood, IM is likely to occur with uncomfortable symptoms.

Clinical features can be hard to discern as most immunocompetent patients are asymptomatic [3]. In immunocompetent individuals, symptoms will mainly correspond to infectious mononucleosis (IM) in young adults, though these symptoms could also presuppose leukemia or lymphoma. In immunocompromised patients, EBV may exacerbate their autoimmunity; this results in high morbidity and mortality rates. Most symptoms in IM and other diseases caused by EBV are a direct result of cytotoxic T cells attacking the EBV in B cells. 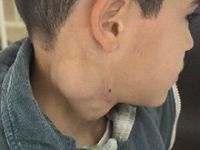 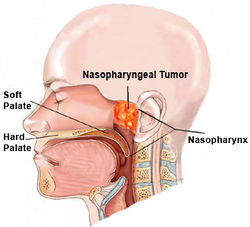 The symptoms of IM can begin quickly and develop rapidly. The main, specific, symptoms to IM are sore throat and neck swelling, though there are non-specific symptoms such as vague discomfort, headaches, chills, and fever [2]. Spleen tenderness and rashes are some of the more commonly serious symptoms to suggest IM. EBV replicates in B cells and epithelial cells and the sore throat is usually caused by lysis of the oropharyngeal epithelial cells. The swollen neck is due to enlarged lymph nodes as the infected B cells replicate to normal cells. IM can be caused by a variety of pathogens, however EBV is the cause of over 90% of reported cases. Teenagers are at the highest risk of IM when exposed to EBV for the first time. Primary exposure of EBV in infants is usually accompanied by flu-like or no symptoms whatsoever. Chronic Fatigue Syndrome was once thought to be associated with EBV, but as of recent research, no correlation has ever been found [4]. IM caused by EBV has been shown to be a risk factor for those with Chronic Fatigue Syndrome, but EBV itself does not cause CFS.

EBV is an aggressor and stimulator of other, more serious and life-threatening, diseases and cancers. There is not always a direct correlation between EBV and these symptoms, but they can be worsened if EBV becomes lytic. Most of these ailments are found in the lymphatic system, as that is where the infected B cells reside.

There are a variety of serological tests that can be used to detect for mononucleosis. A Paul-Bunnell monospot test can be performed to test for heterophil antibodies. Heterophils are associated with neutrophils in humans and the antibodies are present in over 90% of IM patients. However, these antibodies can also arise in Lupus and HIV patients and are also not present in children [10]. The monospot test has high specificity markers but low sensitivity, so unless the infection is caught at just the right point after onset of symptoms, false-negatives and false-postives are very common. If IM infections chronically occur, EBV antibodies can be studied for abnormalities. Elevated white blood cell counts and 10% abnormal lymphocytes are also sufficient to diagnose IM. Epstein-Barr virus antibody tests can test the viral capsid antibodies (VCA) which also successfully diagnoses EBV infections. IgM antibodies to VCA and the absence of IgG are diagnostic for IM [2].

The diagnosis of those aforementioned cancers are usually telling by swollen necks/tumors. Biopsy of lymph nodes and tumors can give a correct diagnosis of Burkitt's Lymphoma or NPC. Serum antibody titres of EBV antigen can give a diagnosis and progress of NPC. When dealing with immunocompromised individuals, finding any EBV DNA in cerebrospinal fluid is a known diagnostic marker. A starry sky pattern is commonly associated with Burkitt's Lymphoma. The name comes from the dark background produced by the tumor cells and the macrophages surrounding are turned white as they turnover the damaged cells. These macrophages are called scattered tingible body macrophages and cause the cytoplasm to fall away in the tumor cells, leaving the white "stars" [11]. When a section of the lymph is seen under a microscope and a "starry sky" is observed, a diagnosis of Burkitt's Lymphoma is certain.

Serology tests are always used to determine the specific diseases and EBV antigens are usually present in the aforementioned cancers/IM. The route of diagnosis varies for immunocompromised or immunocompetent patients, as a correct diagnosis is more pertinent in HIV and otherwise compromised patients. Just because a patient tests positive for EBV antibodies does not necessarily mean they are at risk or carry these diseases.

Any treatments used against infections/cancers linked to EBV can only be used to alleviate symptoms and there is no definitive cure. The overall goal in anti-EBV trials is to inhibit the replication cycle and growth of the virus in cells. Various trials have been performed, however, no significant advances have been made in truly getting rid of the virus. [12]. Once infected with EBV it will remain in your cells for the rest of your life, but IM usually resolves on its own within 4 to 6 weeks. Symptoms can last for 1-4 weeks, but it can often be months before normal activities may be resumed. The best treatment for IM is bed rest and minimal activity until symptoms are resolved. If the swelling is severe enough, corticosteroids can often be used to reduce inflammation, and NSAIDS can be taken for pain and fever. Anti-viral treatments have not been proven to alleviate symptoms or shorten the duration of illness [13].

For Burkitt's Lymphoma, one dose of chemotherapy is usually sufficient for regression of tumor cells, but a full course of treatment should be given to lessen the chance of a severe relapse [2]. Nasopharyngeal carcinoma is usually treated with radiotherapy, though chemotherapy and surgery are also options, though not recommended. The survival rate is significantly less compared to Burkitt's Lymphoma due to the area affected. For NPC and MS, immunotherapy trials are still being conducted. The purpose of immunotherapy is to trigger the immune system to work better against the infection or to introduce crucial proteins that aren't found in immunocompromised patients. These various immunotherapy trials are usually last-ditch efforts to eradicate a tumor or cancer and are not proven to fully eradicate EBV [14].

With the advent of an HPV vaccine, hopes for an EBV vaccine are high, but so far has just led to disappointment. With over 90% of the world's population infected with EBV, it is essentially impossible to prevent infection. Theoretically avoiding an infected person's saliva would prevent the infection, but it's usually too common during adolescence to avoid. An effort to develop a vaccine targeting the glycoprotein responsible for adherence showed a decreased incidence in IM but could not prevent EBV latency. This is troubling as it seems unlikely to ever prevent the dangerous cancers caused by EBV [15]. Developing a vaccine is also challenging because it is difficult to work with the virus and find suitable animal models to mimic a human host immune response. The virus will only replicate in human cells, making research incredibly difficult.

Though the virus is linked with these diseases, there are other factors to consider such as geographic location, other pathogens, genetics, and lifestyle. For instance, malaria works hand in hand with EBV to cause Burkitt's Lymphoma, and it has yet to be seen which is a stronger factor. Because the role of EBV in these cancers has not been fully elucidated, preventative measures are difficult to create. The best mode of prevention in immunocompromised patients and those that struggle with recurring illnesses is to watch the EBV load and stimulate the immune system to prevent further complications [16].

7. Relationship Between Epstein-Barr and Nasopharyngeal Carcinoma

10. Epidemiology of EBV and Malignant Diseases

Created by Jordan Abney, student of Tyrell Conway at the University of Oklahoma.