A Microbial Biorealm page on the Erythrobacter 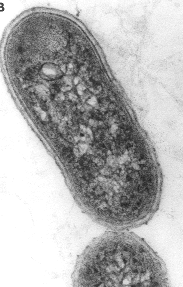 Erythrobacter is a strict aerobic bacterium which contains bacteriochlorophyll a (BChl a) known as anoxygenic phototrophs (Denner et al). It contains a large amount of carotenoids, which is responsible for its smooth red-orange color (Koblizek et al). It is also Gram-negative, non-sporeforming, and non-motile. Because of its metabolism, Erythrobacter appears to be a critical component of the cycling of both organic and inorganic carbon in the ocean.

Also, a study by Vladimir V. Yurkov et al showed that, E. litoralis, along with some species of Erythromicrobium, could resist and reduce tellurite, a toxic compound for both bacteria and other organisms, including humans. Therefore, it is a potential candidate for playing a role in removing such poisons.

Complete genome sequence of Erythrobacter litoralis was published in 2005 (Accession number: CM000156). The circular DNA of the bacterium consists of 3,052,801 Bp, and it has 3088 genes (46 of which are RNA genes). Also, 16S rDNA phylogenetic tree has been constructed using the maximum-likelihood method. (Koblizek et al)

Though varies in its shape, Erythrobacter is most frequently ovoid or rod-shaped, 0.5-0.7 * 1-4 µm. Because of the organic-rich environments it is often found, the cells tend to form irregular natural "clumps" (Koblizec et al). Since Erythrobacter contains an usually large amount of Bchl a, the cellular carbon per Bchl a ratios range from 700:1 to 1500:1, values that are more than ten times higher than than the C:Bchl a ratios reported for marine phytoplankton (Koblizec et al). Although little is known about Erythrobacter's metabolism and nutrition to this date, series of studies show that it grows most rapidly between 25 to 30°C, and utilizes simple carbon sources such as acetate, butyrate, gucose, pyruvate, glycerol, fumarate, and lactate for photoheteotrophic growth, but does not require Na positive ions. As for its nitrogen sources, it utilizes ammonium, urea, and amino acids, but cannot use nitrate.

Erythrobacter is most frequently found in nutrient-rich coastal seawaters. Studies are currently being held both in the United States and Europe, especially around the Western Mediterrannean Sea, where newsest species of Erythrobacter (E. citreus) had been found.