Difference between revisions of "Erythromicrobium"

A Microbial Biorealm page on the Erythromicrobium 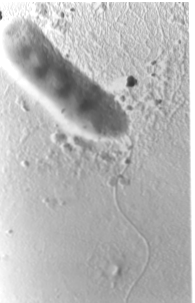 Despite the presence of bacteriochlorophyll a (Bchl a), Erythromicrobium is not capable of growing photosynthetically, which distinguishes the bacterium from other Bchl a-containing groups. Other main features include low levels of photosynthetic units in cells and strong inhibition by light of Bchl a synthesis (Yurkov et al). Due to the presence of large amounts of carotenoids, Erythromicrobium has a smooth red-orange color. Recent discoveries of its high resistance to heavy metal oxides and of the ability to reduce these toxic compounds suggest that the bacterium has potential industrial and biotechnological uses. (V. V. Yurkov)

There is currently a few gene-centered studies held for Erythromicrobium. Similar to other aerobic phototrophic bacteria, the study of its genetics is still developing, and there could be more detailed study similar to the one conducted by Yurkov et al in the near future.

Most species have long rods and produce characteristic thread-like cells (0.6-1.1 * 1.6-2.8 µm). It has been discovered that the maximum size and total amount of tellium crystals (intracellular product of tellurite reduction) in Erythromicrobium, along with other phototrophic bacteria, were much greater than those reported for E. coli, Pseudomonas or Rhodobacter species. For example, in some cells of Erythromicrobium ramosum, 20 to 30 % of their volumes was occupied by metal crystals. Erythromicrobium utilizes substances such as glucose, maltose, acetate, malate, citrate, succinate, lactate, and ethanol for growth.

Little is known about the bacterium's ecological features, exept for the fact that it appears to be distributed in freshwater environments, which suggests that it is freshwater obligately aerobic anoxygenic photosynthetic bacteria

However, it is known that species of Erythromicrobium are capable of reducing soluble tellurium (IV), which is highly toxic for microbes and other organisms includign humans, to solid Te (0) when grown in the presence of tellurium along carbon sources such as RO, yeast, acetate, and L-Glutamine. This means that the bacterium could play an important role in removing the poison from polluted sites. This characteristic, along with the fact that it is resistant to metals such as tellurite, tellurate, selenite, selenate, arsenate, and vanadate, makes the bacterium a potential candidate for removing several heavy metal ions from polluted industrial waste waters.