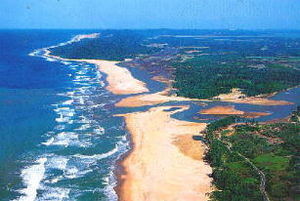 "An estuary is a partly enclosed coastal body of water with one or more rivers or streams flowing into it, and with a free connection to the open sea."[[2]].The estuarine environmental is characterized by a constant mixing of freshwater, salt and sediment, which is carried into the estuarine from sea and water. Wave energy along the ocean beach is perodic and high.The mixture and fluctuation of salt and freshwater impose challenges to the physical and chemical environment, the animals and microbes. Estuaries are transition zones between rivers and the sea, which differ from both in abiotic and biotic factors(McLusky,2004).Thus estuaries are among the most highly productive ecosystems on the earth. The gradient of conditions from the open sea into the sheltered estuary changes the salinity ranging from full strength seawater to freshwater. Associated change is sedimentary conditions from coarse sediment to fine sediments. Other changes include nutrient input, pollutant and chemical concentration along with estuarine flows.

The activities of microorganisms dominate the functions and structures of estuarine ecosystems, and thus are critical in controlling the function and structure of estuarine ecosystems. Various flows process in an estuary and those flows that may be dominated by microbial activities. large number of bacteria, fungi and protozoa have been found in estuaries and benthic sediment, their distribution, species abundant food references interact with their physical and chemical environment.

The importance of estuary

The productivity and variety of estuarine habitats support a wonderful abundance and diversity of species. Thousands of species of fish, shore birds, marine mammals, clams, shellfish and other widelife survival in and around estuarine habitats.Many fish and shellfish species, including most commercially and recreationally important species, depend on the sheltered waters of estuaries as home to spawn and for their offspring to grow and live. Because the high productivity of living organism, migratory birds also take estuaries as ideal places for resting and reproducing.

In addition to serving as important habitat for wildlife, estuaries also provide valuable environmental services. The water flowing to ocean carries sediments, organic and inorganic nutrients and pollutants. Much of the sediments and pollutants are filtered out when they flows through wetlands, swamps and salt marshes. This filtration process deposits harmful pollutants and then creates an environment for microbes biodegrade these sediments. Estuaries plants also can absorb tide and storm surges, providing peaceful and stable habitats for widelife.This natural buffer also help prevent erosion and stabilize the coast. The transition character of estuaries provide important research value for scientists.Wide range of problems in biology, geology, chemistry, physics, sociology are studied in and around estuaries. Estuaries also provide a great deal of aesthetic enjoyment for the people who live, work, or recreate in and around them.[[3]]

Circulation is defined as the residual water movement, which is calculated based on different time scales. Circulation stimulates fluxes of dissolved constituents and particulate materials such as sediments, detritus matter, bacteria and plankton. The energy drives estuarine circulation is from solar heating , gravitational attraction between the moon and the sun and wind wave. A given estuary usually is dominated by one circulation type, but it is possible to change one circulation model to another temporarily. The circulation cause water flow to a certain direction, but the dissolved and particulate constituents will not necessarily move to certain direction too(John W. Day,1989).

Estuaries regions experience salt water mixes with water derived from land drainage. Mixing is the process whereby a water is diluted ir redistributed with other water body. Mixing event can be divided by long or short time scale. The estuatine circulation movements are the primary mechanism of mixing. Mixing changes the distribution in time and scale of dissolved material in fresh and ocean water. The estuarine salinity alone beach is the most important indicator of mixing, that is, salinity can be used to track water source and mixing frequence.

Chemical processes are the very basis for life in the estuary. Chemical reaction transform materia and energy among individual organisms, especially important for microorganisms. The estuarine ecosystem is a special one in that different reactions occur in freshwater and ocean water and in a gradient of environmental factor.

1. Ammonia-oxidizing archaea (AOA) are ubiquitous and abundant in marine waters and sediments, they contributes to the N cycle in estuarine and coastal environments through coupled nitrification–denitrification or nitrification–anammox (anaerobic oxidation of ammonium) processes. Dang studies the sedimentary AOA diversity, amoA genotype communities and spatial distribution in the Changjiang Estuary and the adjacent East China Sea. Results indicated the gradients of surface-water salinity and sediment sorting coefficient are significantly correlated with the distribution of AOA communities.The archaeal amoA sequences had quite high similarity with known sequences from various soil environments or coastal and estuarine environments of the East Pacific Ocean, suggesting that similar archaeal AOA communities might exist in similar estuarine environments across the geographical distance(Dang HY,2008). Caffrey studied the abundance of ammonia-oxidizing bacteria (AOB) and AOA amoA genes in six different estuaries at multiple sites.AOA rather than AOB are responsible for much of the nitrification in estuarine sediments.The potential nitrification rates increased as abundance of AOA amoA increased, suggesting that AOA are more significant than AOB in estuarine nitrogen cycling(Jane M Caffrey,2007).

3. The bioremediation potentials of microbes in different environments are hot topics for microbiologists. Some estuaries near urban and industrial areas received high inputs of a large variety of micro-pollutants including polycyclic aromatic hydrocarbons (PAHs).PAHs are toxic, mutagenic and carcinogenic for human health and the environment. Examination of the ecology of PAH degrading microorganisms is thus essential to prevent ecological damage caused by organic pollutants in estuary ecosystem. Research have found that a large number of bacterial species are able to bio-degrade PAHs,but the diversity of the bacterial community are also dramatically reduced due to special carbon source availability in PAHs pollutants. Analysis of the 16S rRNA gene sequences confirmed that Cycloclasticus spp., play an universal key role in degradation of low-molecular-weight PAHs in marine environments. Additionally, Pseudomonas spp., considered as a good PAH-degrading bacterial group in soil or in sediment, also increased their competition and adaptation in PAHs degradation in the seawater macrocosm(Niepceron,2010).